The rush to take holidays under canvas has prompted a run on the home comforts that make tent life more congenial – and resulted in shortage of camping toilets.

Mike Attwooll, a product buyer at the camping equipment seller Attwoolls, said camping conveniences were “going out of the door as quickly as they’re coming in. You can’t get a toilet for love nor money.”

There has been soaring demand for pitches at campsites as people have had overseas breaks cancelled or just opted to holiday closer to home this year.

However, concerns over hygiene during the pandemic mean some sites have reopened without their usual facilities – almost a third of the Camping and Caravanning Club’s 103 sites currently have no toilets or showers open to customers.

At the same time, more holidaymakers are opting to make their own arrangements in lieu of using shared blocks, leading to a run on toilets and cubicle tents to accommodate them. 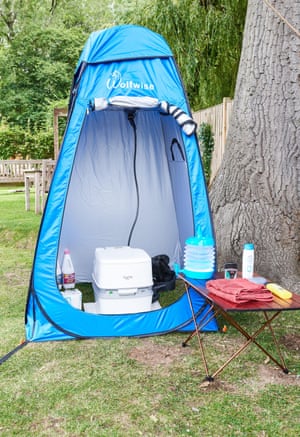 The options for campers range from basic toilets akin to a bucket with a seat, selling from about £15, to more upmarket versions, some complete with flush, typically £50 and upwards.

Anyone staying in a tent rather than a caravan with a separate bathroom may also want to invest in a separate toilet tent – these start at about £25 but it is possible to spend as much as £160 if you’re feeling flush.

Attwoolls’ website currently lists all but one product as sold out, while at World of Camping all types are unavailable. Argos is showing toilets and tents as in stock but none appear to be available for delivery.

Dave Addy, a buyer for the UK’s largest outdoors retailer, Go Outdoors, said it had seen a “huge rise” in sales of toilets, toilet chemicals, camping showers and utility/shower tents, and that “many of these items sell out as soon as they arrive in stock”.

He said this was driven by “those seeking a true socially-distanced and self-contained camping setup”.

Supply has also been a problem, with delayed deliveries from manufacturers in east Asia.

It’s the same story at Newquay Camping and Leisure in Cornwall. It said it was struggling to get products from suppliers who had been taken by surprise by the move towards more UK holidays.

Suppliers confirmed that demand for their products was much higher than in bog-standard years.

Kampa, which makes toilets and tents, said sales had been “very good” while Thetford, a firm that has made its Porta Potti portable toilet for more than 50 years, said demand for all of its products was “significantly higher”.

Are Analysts Underestimating What Grail Brings for Illumina’s Future Growth?