After meeting with Blinken, Turkey again says it won't give up Russian-made air-defense weapon

ANKARA, Turkey (AP) — Top US and Turkish diplomats failed on Wednesday to overcome sharp differences over Turkey’s purchase of an advanced Russian air-defense system, which Washington sees as a security threat.

Turkish Foreign Minister Mevlut Cavusoglu told Turkish journalists, following a meeting with US Secretary of State Antony Blinken in Brussels, that Turkey would not step back from its decision to operate the Russian S-400s. The meeting, held on the sidelines of a NATO gathering, was their first since President Joe Biden’s administration took office in January.

“We have told them once again that Turkey has already bought the S-400s and that the issue is closed,” Cavusoglu said in televised comments, despite US pressure on Ankara to get rid of the system.

He added however, that he also told Blinken that Turkey aimed to procure its future air defense needs from the United States or other NATO allies.

The US and Turkey are at loggerheads over a host of issues, but especially over Turkey’s acquisition of the anti-aircraft system, which Washington says poses a threat to NATO and to the US F-35 fighter aircraft program. 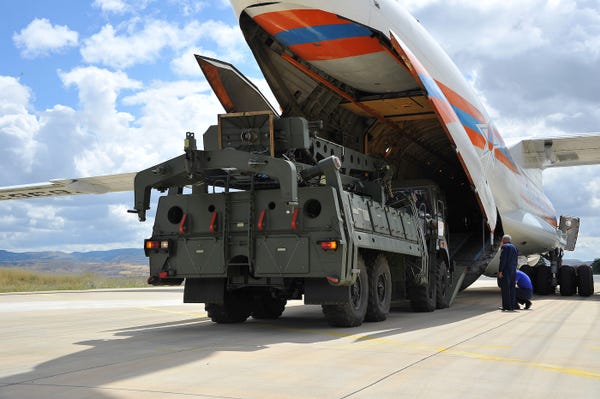 Washington kicked Turkey out of the F-35 production program and last year imposed sanctions on senior Turkish defense industry officials, as well as bans on military export licenses. The penalties were imposed under a law that aims at pushing back on Russian influence.

Turkey argues that the Russian system, which cost it $2.5 billion, is not a threat to NATO and has repeatedly called for dialogue to resolve the issue. Washington insists the sanctions cannot be lifted as long as the Russian system remains in Turkey’s possession.

A US State Department statement said Wednesday that during their talk, “Blinken urged Turkey not to retain the Russian S-400 air defense system.”

On Tuesday, Blinken said during a news conference with NATO Secretary General Jens Stoltenberg that “it’s no secret that we have differences with Turkey, including over the S-400s.”

He continued: “It’s also no secret that Turkey is a long-standing and valued ally, and one that I believe we have a strong interest in keeping anchored to NATO.”

Meanwhile, Cavusoglu told journalists that his talks with Blinken also focused on US-supported plans for Turkey to host peace talks between the conflicting sides in Afghanistan, before a May 1 deadline for the withdrawal of US and NATO troops from the country.

Turkey and the US were working to ensure that the Afghan government and the Taliban reach an agreement on a “roadmap” for Afghanistan during the Turkish-hosted conference, Cavusoglu said.