Alex Jones back in court, the Ethereum merge, and Facebook's young people problem

This story is part of CNN Business’ Nightcap newsletter. To get it in your inbox, sign up for free, here.

We’re not the only ones fixated Wednesday’s policy announcement. Financial markets are on a knife’s edge, and have been for weeks, as they await word from the central bank on how much monetary tightening to expect. Stocks have fallen four out the past five weeks.
On Monday, Wall Street vacillated between slight gains and losses, effectively in a holding pattern while investors awaited word from the Silver Fox himself, Mr. Federal Reserve Chairman Jerome Hayden Powell.

Here’s the deal: On Wednesday afternoon, the Fed will announce its next rate move, which will almost certainly amount to three-quarters of a point, aka 75 basis points, for the third time in a row. 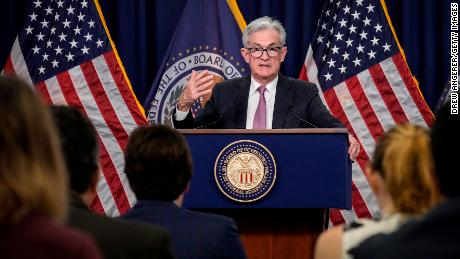 But there’s a not-insignificant chance that, given the stubbornness of inflation, the Fed goes HAM and jacks up rates by a full point — something the US central bank has never done. As of Monday, just 16% of investors were counting on a full-point hike, according to the CME FedWatch tool.

What happens after that? It’s anyone’s guess.
Wall Street is divided on whether the Fed will keep hiking rates aggressively in November, or if inflation pressures will cool enough to allow the central bank to slow the pace for a bit, my colleague Paul R. La Monica writes.

Raise rates too much, we get a recession. Don’t raise them enough, we get an inflation spiral (and also, ultimately, a recession). And, as Paul explains, stocks are in for a volatile ride one way or another.
One person landing solidly in the optimistic camp is President Joe Biden. On Sunday, Biden focused on the positive, saying “we’re going to get control of inflation,” in an interview with CBS.
He touted his administration’s gains in the labor market, with 10 million new jobs added since he took office, and its investments in the semiconductor industry.
One person in the pessimistic camp is, well, me. So here’s my two cents:
As I wrote here last week, many of the key drivers of inflation — supply chain jams, the war in Ukraine, Covid lockdowns, Corporate America’s eagerness to fatten profit margins — aren’t the kinda thing the Fed or the White House can simply solve. In tamping down demand, the Fed can control just one side of the equation. The president can help grease the works of global supplies, but he can’t unilaterally move grain out of a war zone, or (better yet) end the war.
I blame FedEx for my grouchy mood.
ICYMI last week, the package courier, which serves as a sort of economic bellwether, dropped a rather grim pre-earnings warning to investors. The company withdrew its full-year guidance, saying that a slowing economy will cause it to fall $500 million short of its revenue target.
FedEx CEO Raj Subramaniam told CNBC last week that he believes we’re about to enter a global recession, spooking just about everyone on Wall Street and fueling a brutal selloff. FedEx shares plunged 21% Friday —their biggest one-day drop ever.
The FedEx fiasco could be harbinger of more bad news to come next month, when third-quarter earnings season begins.

QUOTE OF THE DAY

“If we do see protracted inflation now, it will be a disgrace to this country, and it will lower trust in institutions even more.”
— Robert Shiller, a Nobel Prize-winning economist at Yale University, says central banks have no choice but to hold the line when it comes to fighting inflation. In an interview with my colleague Julia Horowitz, Shiller discusses why surging prices can be so difficult to combat, and why the Fed may want to go all out with a full-percentage-point rate hike.

Forty years ago today, at 11:44 am, the emoji was born as a stitched-together colon, hyphen and closed parenthesis. It looked like this : – )
Long before we had 😍, 😩, and 🧐 (my personal favorite) and thousands of others, we had the analog smiley face known as an emoticon, created by Scott Fahlman, a computer science professor at Carnegie Mellon University.
Fahlman wasn’t trying to revoltionize the way we communicate online; he was tired of jokes and sarcasm getting misread on a school intranet bulletin.
“One person wouldn’t get the joke and would respond with anger, hostility, and pretty soon the initial discussion had disappeared, and everybody was arguing with everyone,” Fahlman told my colleague Jennifer Korn.
Of course, emoticons became emoji (style note: the plural of emoji is emoji), and our text conversations added a new layer of meaning. Like, check this out:
OK, fine 😂
OK, fine 😔
OK, fine 🙃
OK, fine 🙄

…You get the idea.
These days, there are more than 3,600 emoji, overseen by the nonprofit Unicode Consortium.
“Having 3,000 or so little pictures you can include with a touch of a fingertip is like having 3,000 more bits of punctuation,” said Jeremy Burge, founder of Emojipedia. “So while I think we’d managed without it, I don’t know why you would choose to live in a world where there are no emojis.”
Read Jennifer’s fascinating history of the humble emoji here.

Google, one of the premiere tech companies of our time, just made a big oopsie when it fat-fingered a $250,000 payment to an engineer. Trouble is, the guy had never even worked for Google.
Sam Curry, a security engineer at cryptocurrency company Yuga Labs, tweeted last week that he’d been trying to get in touch with someone at Google for more than three weeks. “Is there any way we could get in touch @Google? It’s OK if you don’t want it back.”
Unfortunately, Google does want it back. The company blamed the mistake on “human error.”
MY TWO CENTS: Not only should Curry be allowed to keep this money, but Google should not be allowed to claw it back. I’m no lawyer, but I believe that is the correct and just outcome when a trillion-dollar company with virtually unlimited power to control, like, the entire internet, accidentally drops its pocket change.

When Citibank infamously wired $900 million to a bunch of lenders in error back in 2020, many of the firms that received the money refused to return it. And so far, at least, the courts have sided with those firms. (Citi is appealing to try to recoup the funds.)

Enjoying Nightcap? Sign up and you’ll get all of this, plus some other funny stuff we liked on the internet, in your inbox every night. (OK, most nights — we believe in a four-day work week around here.)
Source: Read Full Article