Suez Canal blockage aftermath will ‘untangle itself’ in about a week: Former Shell Oil president

The giant container ship that blocked the Suez Canal for six days was freed Monday, but another bottleneck in the supply chain remains, this one in Southern California.

On Monday morning, 24 container ships—with a combined maximum carrying capacity nearly 10 times that of the newly freed ship—were anchored off the coast waiting for space at the ports of Los Angeles and Long Beach, according to the Marine Exchange of Southern California, which keeps tabs on vessels and directs ship traffic.

The ships are carrying tens of thousands of boxes holding millions of dollars’ worth of washing machines, medical equipment, consumer electronics and other of the goods that make up global ocean trade, all of it idling in the waters in sight of docks that are jammed with still more containers.

One was on its 12th day of waiting in the seemingly unending queue. And the vessels keep coming.

Backups started building late last year as retailers and manufacturers tried to rebuild inventories that were depleted in the early months of the coronavirus pandemic.

A stark difference can be seen comparing the movements of container ships around the ports in February of 2020 with February 2021, according to location data from shipping tracker Marine Traffic.

In February 2020 there is steady access to the docks with ships rarely anchoring offshore:

And in February 2021, many ships anchor offshore as they wait in a queue for dock space:

The two ports together handle more than a third of U.S. container imports, and delays there are part of a global supply-chain mess that continues even after the ships are unloaded. In January, more than a quarter of imported containers at those gateways had to wait more than five days for handling once they reached the dock, according to the Pacific Merchant Shipping Association. In June 2020, before the logjam, about 2% had to wait that long.

U.S. imports from international trading partners picked up as coronavirus restrictions eased and demand rebounded in the summer of 2020. The U.S. imported a record $219.86 billion in goods in January of this year on a seasonally adjusted basis, about 9% higher than a year earlier.

“Under normal conditions, container ships rarely anchor,” said Kip Louttit, executive director of the Marine Exchange of Southern California. On Feb. 1 at noon, 40 were anchored offshore. The number has dipped since. 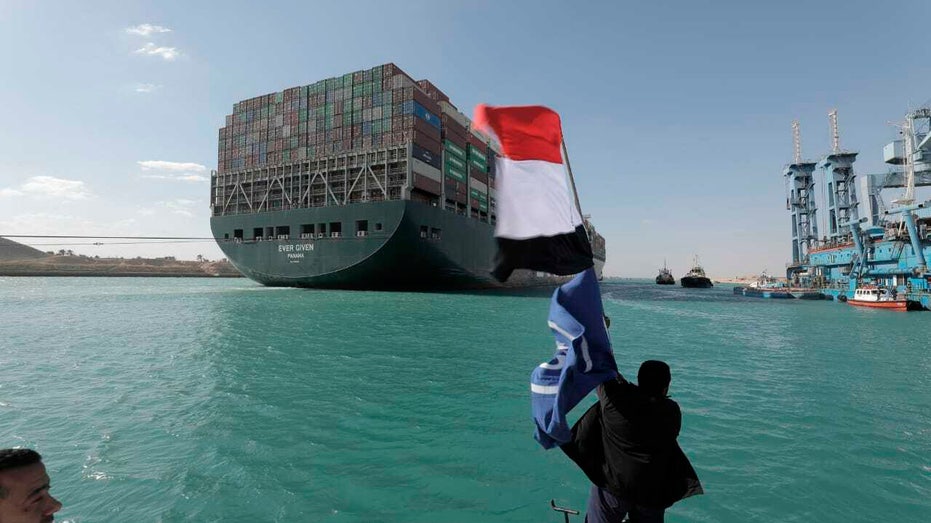 In this photo released by Suez Canal Authority, the Ever Given, a Panama-flagged cargo ship is accompanied by Suez Canal tugboats as it moves in the Suez Canal, Egypt, Monday, March 29, 2021. Salvage teams on Monday set free a colossal container ship

The sudden uptick in shipments last year after a lull in the spring and summer “shocked and choked the goods movement system,” Capt. Louttit said. The extra ships arrived when the system was operating at reduced capacity and efficiency, a bottleneck partly due to transportation and logistics personnel being off the job because of Covid-19 infections and exposure, he said.

The ports of Los Angeles and Long Beach continue to work through the backlog as the number of ships arriving continues to rise. In February of this year, 177 container ships and more than 800,000 containers (in 20-foot equivalent units, or TEUs) arrived at the ports. That’s 31% more ships and 49% more containers than the same month last year.

Seaborne imports into the U.S. have been building for months, starting with a surge in shipments of consumer goods as far back as August, according to Chris Rogers, supply-chain analyst at S&P Global Market Intelligence Panjiva.

“The goods where we have seen the fastest growth in shipments are those that take up a lot of space on container ships relative to their value, with the result that the growth in volume of trade has been faster than the growth in value of trade,” Mr. Rogers said.

The disruptions show how vulnerable supply chains are, and why it has been so challenging for many U.S. businesses to rebound a year after the pandemic’s onset even as the economy begins to recover.