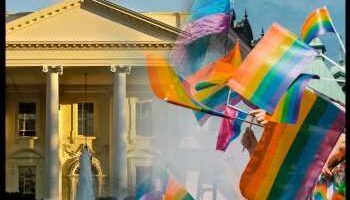 President Joe Biden has signed an executive order on advancing equality for LGBTQI+ individuals in the United States. The order will take historic steps to support LGBTQI+ people, especially children and families, according to the White House.

President signed the order while hosting a White House reception on Wednesday, in celebration of Pride Month. He was joined by Vice President Kamala Harris, First Lady Jill Biden, Second Gentleman Douglas Emhoff, Secretary of Transportation Pete Buttigieg, Secretary of the Interior Deb Haaland, members of Congress, including the leaders of the Equality Caucus; and hundreds of LGBTQI+ leaders.

The President was introduced by Javier Gomez, an 18-year-old Floridian high school graduate who helped to organize the statewide student walkouts over the “Don’t Say Gay” bill that bans teachers from discussing LGBTQI+ people and families.

The President condemned the discriminatory attacks on the LGBTQI+ children and families across the country.

More than 300 anti-LGBTQI+ laws were introduced in U.S. state legislatures this year, many of which specifically target transgender children and their parents.

Biden talked about how these bills are worsening the mental health crisis that LGBTQI+ youth are facing, putting them at greater risk of suicide.

The President’s executive order will protect LGBTQI+ youth from so-called “conversion therapy,” a dangerous and discredited practice that increases the risk of youth suicide and has been condemned by every major medical association.

A senior Biden administration official quoted nearly half of LGBTQI+ youth as saying that they were seriously considered committing suicide last year. Nearly 40 percent of all youth experiencing homelessness are LGBTQI+, he said at a news conference Wednesday.

Biden has entrusted HHS with leading an initiative to reduce the risk of youth exposure to this dangerous practice, and directed the Secretary of State to promote an end to conversion therapy around the world. He urged the Federal Trade Commission to consider whether conversion therapy constitutes an unfair or deceptive act or practice and whether to issue consumer warnings on notices about it.