WASHINGTON — President Biden’s pledge to cut America’s climate warming emissions in half by 2030 is technologically feasible and, scientists say, ecologically imperative. Economically, it could be a gamble.

The speed of the president’s promised transformation to an economy far less reliant on fossil fuels risks exposing vulnerabilities in the nation’s electricity system and unsettling its transportation sector, while potentially increasing American reliance on goods imported from China. Utility chiefs say they could handle the transition over a slightly longer timeline, but they warn of rolling blackouts to meet the president’s 2030 target. General Motors said it will sell only vehicles that have zero tailpipe emissions by 2035; the 2030 date has autoworkers worrying about steep job losses.

But if Mr. Biden can orchestrate the seamless transitionthat he is promising, the rewards could be high: lower risk of catastrophic climate change, a burst of new middle-class jobs and renewed global leadership for American companies in the industries administration officials believe will define the rest of the 21st century.

The president’s pledge, made at the start of a two-day climate summit hosted by the White House, represents perhaps the greatest bet in recent American history on what economists call industrial policy, the idea that the government can steer the development of jobs and industries in the economy.

Mr. Biden and his advisers, backed by several economic analyses, believe they can spend enough federal money and sufficiently regulate the economy to vault America’s manufacturers and research laboratories to the head of a global race to a low-emission future, while adding jobs and raising worker pay.

White House aides say the energy transition is coming and Mr. Biden’s path is the only way to avoid the kind of economic damage American workers experienced in the early 2000s, when automation and globalization claimed millions of manufacturing jobs and America’s leaders seemed powerless to replace them.

On Friday Mr. Biden’s Council of Economic Advisers argued that failing to draw down carbon emissions will leave the United States straggling behind China.

“As we transition to a clean energy future, we must ensure workers who have thrived in yesterday’s and today’s industries have as bright a tomorrow in the new industries,” Mr. Biden said.

Yet Mr. Biden’s timeline for the transition is aggressive and the political prospects for his spending and regulatory goals are uncertain.

Whether the president’s environmental ambitions stunt or supercharge the economy will tie heavily into the fate of Mr. Biden’s efforts to spend trillions of dollars on his proposed agenda to upgrade infrastructure and reshape the rules of American capitalism. 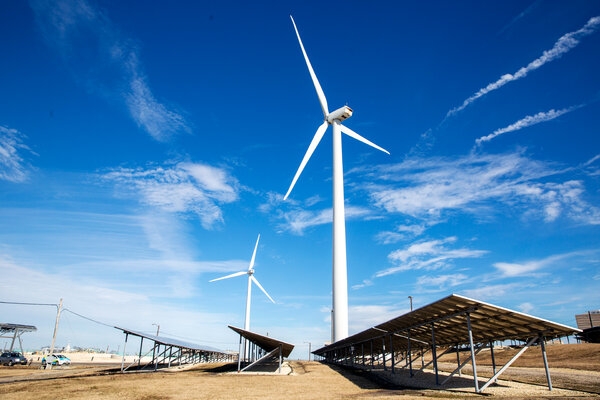 The president has already won a major congressional victory on economic policy and is pressing for more, in the form of a two-part, $4 trillion agenda that he hopes to sign into law this summer. The pandemic recession and its halting worldwide recovery may actually have primed the transition, by snarling global supply chains and feeding bipartisan interest in boosting American manufacturing against global competitors, especially in emerging industries.

“Other economies are going to move, and the citizens of those countries are going to demand clean energy and products that are not made from dirty energy,” John Kerry, Mr. Biden’s global climate change envoy, said in an interview Friday.

Ali Zaidi, the deputy White House national climate adviser, said, “We win the future for our workers and the communities they support by leading on the clean-energy transition, by running ahead of the trend, by investing in our country, so that we can innovate here, so we can manufacture here.”

But many Republicans, protective of oil, gas and coal industries and concerned about rising energy prices, hope to stop the effort.

“I’m really concerned about the increased cost of electricity and energy if we rush too fast to replace the oil and gas industry,” Representative Debbie Lesko, Republican of Arizona, said at a recent hearing.

Louise Carter-King, mayor of Gillette, Wyo., a state that produces 39 percent of the nation’s coal, told Congress that if Mr. Biden’s plans for the electricity sector come to pass, “People won’t be able to afford to turn on lights.”

A decade ago, power plants were the nation’s top source of carbon dioxide pollution. But greenhouse emissions from power plants dropped 36 percent between 2010 and 2020, thanks both to the boom in production of natural gas, which produces just half the greenhouse pollution of coal, and the rise of affordable wind and solar power, which were aided by government spending programs and regulations championed by Mr. Obama.

The cleaner energy was cheaper, too: electricity costs dropped about 14 percent in the same time, in part because the price of generating renewable power fell precipitously.

Mr. Biden’s task could be more daunting. He will need to reduce emissions amid what forecasters expect to be a rapid economic rebound as coronavirus vaccinations spread. Economists expect this year to produce the fastest annual growth in a generation — and with it, a rise in carbon pollution.

“Make no mistake, this is a herculean task,” Fatih Birol, the head of the International Energy Association, said on Friday, referring to collective pledges to decrease emissions.

Richard Rhodes, the energy historian whose recent book, “Energy: A Human History,” recounts the technologies and innovation that transformed energy over centuries, said an Italian physicist, Cesare Marchetti, discovered a hard truth in the 1970s after studying thousands of energy transitions. It takes about 50 years for any new source of energy, be it coal or oil, natural gas or renewable power, to command just 10 percent of the global market. It takes another half century after that to reach 50 percent.

White House officials say the country can defy history with a variety of paths to achieve Mr. Biden’s goals, including reducing emissions from farms and city buildings. But two sectors loom large: electricity, where the president will need far more renewables, including advanced batteries to store power generated by solar panels and wind turbines; and transportation, where reliance almost exclusively on gasoline needs to shift to electricity.

Mr. Biden has proposed a carrot-heavy approach, spending on research and development, efficiency improvements in homes and schools, and the electric grid to better support renewable energy. As part of his infrastructure plans, he wants Congress to require electric utilities to shift toward lower-emission power sources.

Mr. Biden’s emissions target relies on electric power plants cutting their emissions sharply by 2030 and to net zero by 2035.

“Our analysis says we could get there by 2050,” said Nick Akins, chief executive of American Electric Power, an Ohio-based electric utility, but not 2035.

“If we move too quickly, we could jeopardize the reliability of the grid,” he added, pointing to the recent rolling blackouts in Texas

Mr. Biden’s infrastructure proposal includes $174 billion in spending to build electric vehicle charging stations, and his advisers are considering a mandate to sell only electric vehicles after 2035. G.M. has already set that target.

But autoworkers are worried; assembling a car powered by a battery requires about a third fewer people than one powered by an internal combustion engine.

“We’ve been stressing a more cautious approach to electric vehicles,” said Rory Gamble, the president of the United Auto Workers.

Mr. Biden hopes the infrastructure bill will create tax incentives to lure the makers of electric vehicle batteries to build their factories in the United States, which could create millions of new domestic manufacturing jobs. “But if it doesn’t work and doesn’t take hold — we’re afraid of what could happen,” Mr. Gamble said.

Lewis Black, chief executive of Almonty Industries, a Canadian company which produces tungsten, a key mineral in electric vehicle batteries, said he welcomes the opportunity to sell his products to American automakers. But Mr. Black, who is American, was skeptical that the United States could quickly ramp up the supply chain needed to produce electric vehicle battery parts. About 70 percent of the world’s electric vehicle batteries are now built in China, and most of the minerals and materials used in making them are mined there.

“How are you going to provide for this dramatic increase in products that you currently have not the capacity to produce?” he said.

Earlier this month 13 electric utilities including the New York Power Authority and the Los Angeles Department of Power and Water, asked Mr. Biden to require power companies to generate a certain percentage of their electricity from wind and solar. The companies argued that such a mandate would lead to a reduction of about 80 percent of the sector’s emissions by 2030.

Some regions may need more time, they wrote, but “collectively, we believe this national level of deep decarbonization across the U.S. power sector by 2030, as a whole, is both achievable and necessary.”

Some analysts say the energy transition could produce more jobs for Americans than it kills. Some would pay worse than the lost jobs, but more would pay better. The Rhodium Group, an energy consultancy, predicted that a plan like Mr. Biden’s for investments in low-emission electricity could kill more than 70,000 coal and natural gas jobs, but create nearly 550,000 new renewable energy jobs.

Heather McTeer Toney of the Environmental Defense Fund, an advocacy group, said she is concerned that the transition to clean energy, like past economic shifts, could leave communities of color behind unless the Biden administration looks for specific ways to make sure resources go to neighborhoods that need it most.

Recalling the economic boom that accompanied the rise of the internet, Ms. Toney said: “Where were the Black and brown and Indigenous communities? They weren’t part of the conversation. They weren’t at the table.”

Still, Ms. Tony called the efforts of some industry leaders nothing more than scare tactics.

“They really want Americans to believe there’s going to be a hard stop, that you’re going to go to your local Walmart one day and you’re not going to be able to get gas. That’s not how this is going to happen,” she said.