President Joe Biden’s months-long crusade to pass a $1.9 trillion COVID-19 stimulus plan may enter its final stretch Wednesday, when senators could begin 20 hours of debate on the measure that is expected to come to a vote later in the week. Senate Majority Leader Chuck Schumer said Tuesday Democrats are “on track” to pass the bill by March 14, when a federal boost to unemployment benefits expires. “I expect a hearty debate. I expect some late nights on the floor,” he said. Meanwhile in the House, leaders are eyeing a final vote as soon as Monday, a timeline that means the bill – with its $1,400 stimulus checks, funding to state and local governments and tax credits for families – could become law by next week.

Prefer to listen? Check out the 5 things podcast:

At least 13 people died after an SUV packed with dozens of passengers collided with a semi-truck near the U.S.-Mexican border Tuesday, according to California Highway Patrol officials. Investigators are still piecing together why more than two dozen people were crammed into the vehicle, where they were coming from and where they were going. “Obviously, that vehicle is not meant for that many people,” said California Highway Patrol Division Chief Omar Watson. “It’s unfortunate that that number of people were put into that vehicle.” Macario Mora, a spokesman for Customs and Border Protection in Yuma and El Centro, said the Border Patrol was helping other law enforcement with the crash. He said the immigration status of those in the SUV was unknown and being investigated. 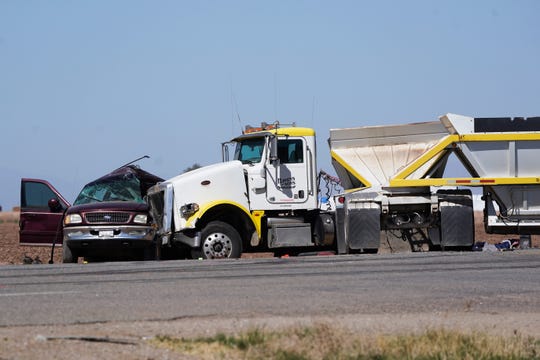 Defying warnings from federal health officials about the need to stay vigilant against the coronavirus, the Republican governors of Texas and Mississippi said they’re lifting COVID-19 restrictions, including mask mandates. Mississippi Gov. Tate Reeves announced that, starting Wednesday, all county mask mandates would be lifted and businesses allowed to operate at full capacity. “Our hospitalizations and case numbers have plummeted, and the vaccine is being rapidly distributed. It is time!” Reeves said. Meanwhile, Texas Gov. Greg Abbott said he’s moving to “open Texas 100%” and will issue a new executive order to take effect March 10 rescinding most of his earlier orders. The U.S. has more than 28.7 million confirmed coronavirus cases and 516,400 deaths, according to Johns Hopkins University data.

Both states' governors signed executive orders canceling the mandates of facemasks and are returning to pre-pandemic standards.

Acting Capitol Police Chief Yogananda Pittman will testify before the full House Appropriations subcommittee on Wednesday after confirming last week that Officer Brian Sicknick died in the “line of duty” during the Jan. 6 riot at the U.S. Capitol.About 140 officers were injured during the riot, suffering head and back injuries, gouged eyes and severed fingers. Security video played at the Senate impeachment trial of former President Donald Trump showed officers beaten, trampled and at least one crushed in a door. On Tuesday, FBI Director Christopher Wray told the Senate Judiciary Committee there is an investigation into Sicknick’s death, but he couldn’t say whether a cause of death has been determined. Wray noted that the investigation is of great interest because Sicknick protected lawmakers in the Capitol.

Multiple rockets struck an airbase in Iraq hosting U.S. troops on Wednesday, according to a spokesman for the U.S.-led coalition forces in the country. Col. Wayne Marotto said ten rockets hit Ain al-Asad airbase in Anbar province at 7:20 a.m. and Iraqi security forces were leading an investigation into the incident. The attack comes days after the Pentagon launched airstrikes against Iran-aligned militia targets along the Iraq-Syria border, and Pope Francis’ scheduled visit to Iraq on Friday.