The selloff came after reports that the Biden administration was planning proposed changes to the US tax code. This could include a plan to nearly double taxes on capital gains to 39.6 percent for people earning more than $1 million.

Bitcoin slumped 7 percent to $48,176, falling below the $50,000 mark for the first time since early-March, while smaller rivals Ether and XRP fell around 10 percent.

The tax plans also hit markets, prompting investors to book profits in stocks and other risk assets, which have rallied massively on hopes of a solid economic recovery.

Levies on investment gains were said to be in line for record increases.

Bitcoin is on track for a 15 percent loss on the week, though it is still up 65 percent since the start of the year. 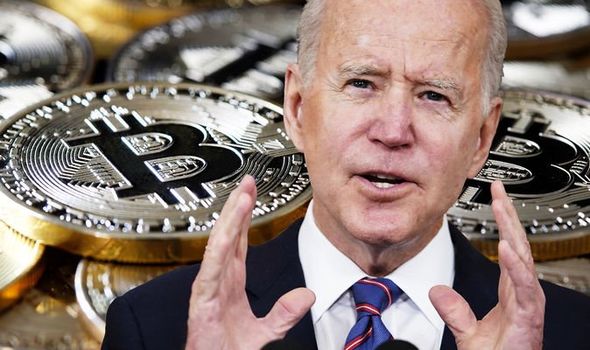 Chris Weston, head of research at Pepperstone Markets Ltd, a foreign exchange broker based in Melbourne, explained why the tax plan may be affecting the value.

He said: “That’s what everyone is talking about now.

“And I think you may have some technical selling going through. Ether’s been the poster child of movement.

“It has massively outperformed Bitcoin.”

This marked the lowest level since its listing earlier this month.

The listing had driven bitcoin prices to $65,000, before pulling back 25 percent in the following days.

DON’T MISS
Bitcoin price: How much is Bitcoin worth? Why is Bitcoin dropping? [REVEALED]
Bitcoin resurgence: Crytocurrency to reach $250,000 value ‘by July’ [INSIGHT]
Bitcoin latest: The FIVE cryptocurrencies that could outshine Bitcoin [DATA]

Neil Wilson, chief market analyst at Markets.com said: “The Coinbase listing the ultimate poacher-turned-gamekeeper moment – might have been the high watermark for Bitcoin.”