BMW Has Fallen Behind in the Electric Vehicle Race. Can It Catch Up?

MUNICH — Eight years ago, BMW was one of the first major automakers to sell a battery-powered car: The i3 broke ground with its lightweight carbon-fiber body and aluminum chassis.

But lately, the German company, known for its sporty luxury cars and “ultimate driving machines,” has fallen behind in the global race to develop the next generation of electric vehicles.

Unlike General Motors or Volvo, BMW has not set a date to bury the internal combustion engine. Unlike Volkswagen, it has not begun selling a full line of vehicles designed from the ground up to run on batteries. As other auto executives wax optimistic about an electric future, Oliver Zipse, the BMW chief executive, has criticized plans by the European Union to ban gasoline and diesel engines by 2035.

“I’m a little concerned about BMW,” said Peter Wells, director of the Center for Automotive Industry Research at Cardiff Business School in Wales. When it comes to committing to a full lineup of electric vehicles, he said, “they have been quite ambivalent.”

The perception that BMW is an electric vehicle laggard helps explain why investors have begun to sour on the company’s shares, which fell even after the company reported a healthy quarterly net profit this month of 4.8 billion euros, or $5.7 billion. BMW shares have tumbled 18 percent since early June.

At BMW headquarters in Munich, company executives say they will prove the critics wrong in coming months. In the fall, BMW will begin selling a battery-powered sport utility vehicle, the iX, in Europe; it will arrive in the United States early next year. The iX will be the first BMW since the i3 designed around battery power, rather than being a conversion of a gasoline or diesel car. 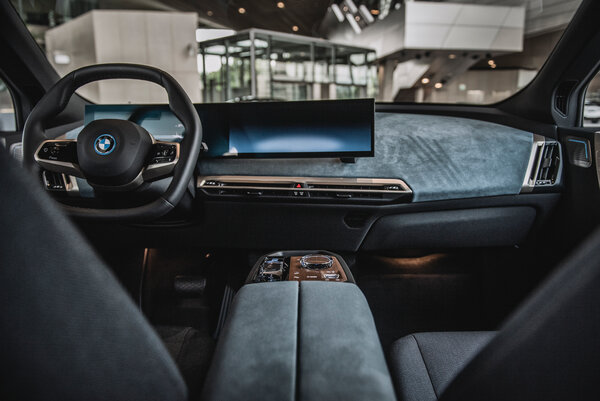 “Maybe you didn’t see that much, but we’ve been working hard,” Adrian van Hooydonk, design director at BMW, said during an interview at BMW World, the company’s showcase in Munich.

BMW executives say the iX manifests a commitment to electric propulsion that falls short of rivals only on the level of braggadocio. They cite the dedicated research center in Munich where BMW is developing its own battery technology. They point out that BMW is engineering a collection of specialized components that will underpin a family of electric vehicles beginning in 2025, which in their view is when the market will take off.

BMW exemplifies the difficult calculations that established carmakers must make as the industry shifts to electric power. It takes four or five years to design a new car, to equip a factory to build it and to organize a network of suppliers. Auto company executives have to make billion-dollar bets based on their best estimates of what car buyers will want half a decade from now, and of what kind of technology will be available.

The Transition to Electric Cars