COPENHAGEN/LONDON (Reuters) – Danske Bank’s (DANSKE.CO) money laundering scandal spread on Friday to Britain where the National Crime Agency (NCA) said it is investigating the use of UK-registered companies.

Concern about the extent of possible money laundering involving Danske Bank’s Estonian branch is mounting and European Union Competition Commissioner Margrethe Vestager joined a growing chorus of calls for a clampdown on the billions of euros alleged to have been “washed” through several European banks.

British and Russian entities dominate a list of accounts used to make 200 billion euros ($236 billion) in payments through Danske Bank’s Estonian branch between 2007 and 2015, many of which the bank said this week are suspicious.

By 2013, the number of UK-registered customers in its non-resident portfolio topped 1,000, Danske Bank’s report revealed, ahead of Russia, the British Virgin Islands and Finland.

Investor concerns over the potential penalties Danske Bank could face have increased, with particular focus on what action U.S. authorities might take after an investigation commissioned by the bank exposed control and compliance failings.

So far the United States has not said whether it is investigating and while Danske Bank Chairman Ole Andersen said that the lender had made an assessment of whether it violated any U.S. laws, he declined to share its conclusion of this.

“We need to do more to prevent money laundering from happening,” Vestager told reporters in Copenhagen following the resignation on Wednesday of CEO Thomas Borgen, who was in charge of Danske Bank’s international operations including Estonia between 2009 and 2012.

Danske Bank’s tiny Estonian branch accounted for as much as 10 percent of group profit during the period when suspected money laundering was conducted via its operations there.

Borgen said on Wednesday that he had been “personally cleared from a legal point of view”, while Danske said its board had not breached their legal obligations.

Denmark’s central bank said on Friday that it supported a proposal for tougher laws to prevent money laundering agreed by politicians on Wednesday and called on the management of Danish financial institutions to ensure none took place.

“As the largest bank in the country, Danske Bank is of major importance to the reputation of the financial sector and hence the financial stability of Denmark.”

The left-wing Red-Green Alliance has summoned business minister Rasmus Jarlov to an open parliament committee meeting on Tuesday to discuss the “political aftermath” of the case.

“We must discuss if we should continue to have banks that are as big as Danske Bank, who with their irresponsible behavior pose a threat to the economy and financial stability, or if they should be split up into smaller units,” the Red-Green party’s business spokesman Pelle Dragsted said.

Jarlov has so far rejected calls to split up Denmark’s largest banks, which also include Nordea (NDA.ST), Nykredit and Jyske Bank (JYSK.CO). 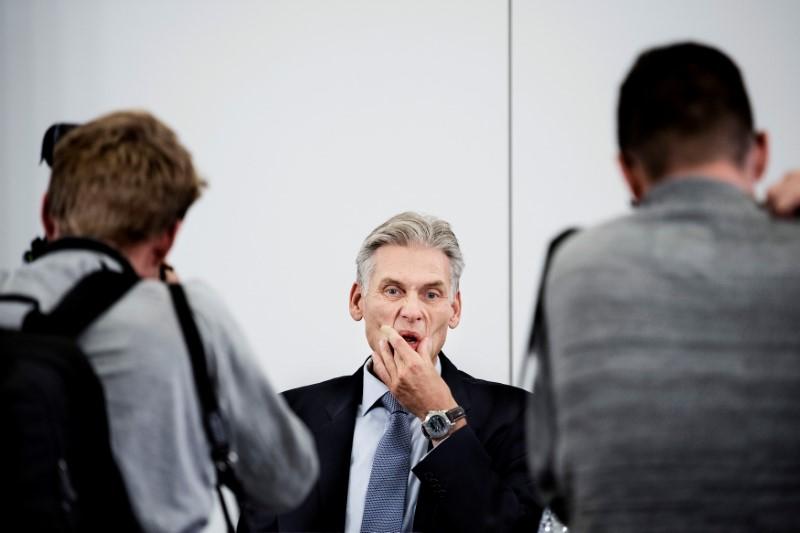 Although credit ratings agency Moody’s said on Friday that it saw no reason to date why Denmark’s AAA rating should be affected, it lowered Danske Bank’s outlook to negative from stable, citing risks related to the scandal such as “further investigations and regulatory penalties”.

Within Denmark, which often tops surveys as one of the world’s least corrupt countries, the saga has stirred a political storm and prompted a backlash against Danske Bank.

“We don’t think it’s appropriate, with the things that have been unearthed, that Thomas Borgen is still heading the bank,” Anders Schelde, head of investments at MP Pension, told Reuters. The Danish pension fund, which holds Danske Bank shares worth around 600 million Danish crowns, will not buy any more shares in the bank while Borgen, who will stay on until a successor is appointed, is still in charge.

Meanwhile, the charity CARE Danmark said it was severing ties with Danske as its main bank.

“We’ve decided to drop Danske Bank due to the money laundering scandal which is incompatible with the values our organization stands for, and what our members expect of us,” CARE Danmark CEO Rasmus Stuhr Jacobsen told Reuters.

And the mayor of Aalborg, Denmark’s third largest municipality, said he would discuss its partnership with Danske Bank at its next committee meeting, but noted that there were only two Danish banks able to handle a municipality its size.