Centre may bring PSBs under Companies Act to enable sale

The government can also individually exempt the PSBs that are to be privatised from the two Bank Nationalisation Acts. This will bring such lenders under Banking Regulation Act, and make them companies, reports Nikunj Ohri. 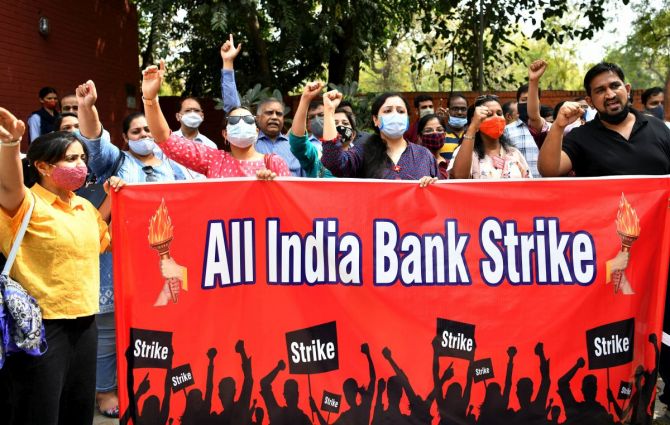 The government is considering bringing public sector banks (PSBs) under the Companies Act to enable the privatisation of two State-owned banks, as announced in the Budget.

This would lead to such banks being brought under the Banking Regulation Act and Companies Act, and would also eliminate the need to separately amend limits for private and foreign ownership, voting rights, etc.

A final decision, however, is yet to be taken.

The legislative changes are likely to be introduced in the monsoon session of Parliament, an official said.

“The government will have to remove special provisions such as appointment of directors and ownership in the Bank Nationalisation Act to bring PSBs on a par with commercial banks,” said D K Mittal, former financial services secretary.

The government can also individually exempt the PSBs that are to be privatised from the two Bank Nationalisation Acts. This will bring such lenders under Banking Regulation Act, and make them companies, Mittal said.

Simultaneously, the government is working on shortlisting the banks that will be privatised, the official said.

The legislative amendments, she had said, would be introduced in the Budget session. However, the Parliament session was curtailed owing to the spread of Covid-19, which led to the delay. The legislation would be moved in the next session.

“This would mean PSBs will no longer be saddled by social commitments which are anyway taken care of by the Reserve Bank of India guidelines. These banks can focus on generating profits and creating shareholder value, which would be one of the significant attractions for attracting private capital,” he said.