The lawsuit filed by Icon Health and Fitness on Thursday alleges patent infringement. Icon claims that two new features in Peloton’s Bike+ — a swiveling touchscreen and the bike automatically changing resistance during classes — were “developed and used by Icon well before Peloton.”
Icon said it has a patent pending on the swivel screen and hold a patent on the resistance feature, which Peloton calls “auto-follow.” Both features are used on Icon’s current line of products, which also includes iFit and FreeMotion brands that make several varieties of gym equipment including bikes and treadmills. 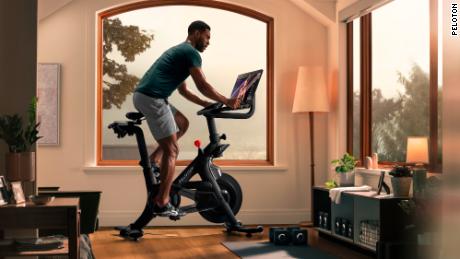 This isn’t the first legal skirmish between the rival companies. In May, New York-based Peloton sued Icon, claiming it “attempted to free ride off Peloton’s innovative technology” because it began broadcasting live classes. Peloton has garnered a following with its leaderboard and social-media-famous instructors.
“As the fitness industry’s leading innovator, Icon is unfortunately accustomed to having companies copy its technology,” the Utah-based company said in the lawsuit. “Some companies, like Peloton, have built (at least in part) entire businesses on the back of Icon’s patented technology.”

The lawsuit also said that in 2013, Peloton CEO John Foley met with Icon prior to the release of its original bike. He was allegedly seeking to use Icon’s patents for the bike, which Icon declined. The two companies settled a previous patent infringement lawsuit in 2017.
Peloton (PTON) said in a statement that the new lawsuit is “nothing more than a continuation of the litigation that Peloton filed against Icon earlier this year, and is a retaliatory filing intended to deflect attention away from Icon blatant infringement of Peloton’s leaderboard technology and other deceptive practices.”
“We will vigorously defend this case in court,” said Steven Feldman, Peloton’s outside litigation counsel.
Bike+ was introduced in September as part of a broader product expansion for the booming fitness company.
It’s been a huge year for Peloton: Its stock is up 360% this year and subscriptions are growing at a rapid pace as home-bound people seek a way to work out. The company currently has a $40 billion market value.

Although Icon doesn’t get as much attention compared to its buzzier rivals, the 43-year-old brand recently announced a $200 million investment to further grow its business. That values the company at around $7 billion.
Gyms and fitness boutique studios, on the other hand, have struggled to coax people back in. Town Sports, YogaWorks, Flywheel, Cyc Fitness and Gold’s Gym are just some of the chains that have filed for bankruptcy and closed several locations.
Source: Read Full Article