If President Ivan Duque has his way, Colombia will soon resume aerial fumigation of coca plantations for the first time in over five years.

It paused the spraying in 2015 due to growing health and environmental concerns over the herbicide glyphosate, which the World Health Organization classifies as a likely carcinogen. Colombian courts have subsequently set strict conditions for future fumigation.

But Duque argues that booming coca crops since then are responsible for rising levels of cocaine trafficking, spurring conflict between armed groups, massacres of civilians, forced displacement and the widespread assassination of local activists and human rights defenders.

The solution, in the government’s view, is to destroy the plants that provide the base ingredient for cocaine. Since taking office in 2018, Duque has directed his security forces to undertake the largest campaign of forcible, manual coca eradication in the country’s history.

Soldiers and police officers have fanned out across the country to spray pesticides at close range or rip up tens of thousands of hectares of coca plants. The prospective aerial fumigation campaign, which must still overcome regulatory and judicial hurdles, would come on top of these ongoing efforts. 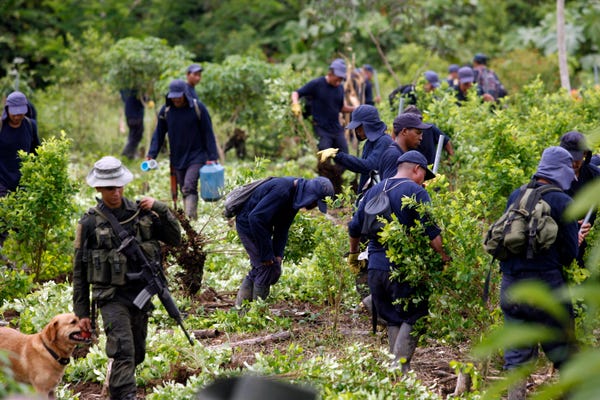 However, there is little evidence to suggest that this strategy will work.

In the years since the Colombian government signed the landmark 2016 peace accord with the Revolutionary Armed Forces of Colombia — the country’s largest guerrilla group, better known as the FARC — it has become increasingly clear that coca eradication is the wrong remedy for Colombia’s problems.

As they have before, these policies may temporarily suppress coca cultivation levels, but they will do little to reduce the economic incentives of a crop that offers poor farmers a reliable price and guaranteed buyers.

They also backfire when it comes to improving rural security. The eradication operations are dangerous both for the military and for growers, as troops come into direct confrontation with civilian farmers as they pull up crops. Given no alternative from the state, eradication pushes rural communities to side with the traffickers in order to protect their livelihoods.

Ministry of Defense figures show more than 1,800 clashes took place last year between cultivators and soldiers. Officials in Bogota argue their goal is to reclaim far-flung areas from the control of criminal groups, but the hostilities provoked by eradication may well make that harder to achieve.

The United States has long advocated for eradication policies in Colombia, in the hope of limiting the influx of cocaine over its borders. With a new administration settling into the White House, now would be a good moment to rethink the merits of this approach.

Washington and Bogota should take their cue from the 2016 peace accord. That agreement laid out a plan to dismantle the illicit drug economy by giving a massive economic boost to poor farmers in the Colombian countryside, creating a program to help coca growers transition from coca to legal crops, and extending public services to communities that lack them.

Although the Duque government says it is committed to these policies as well as to eradication, its emphasis is clearly on the latter. 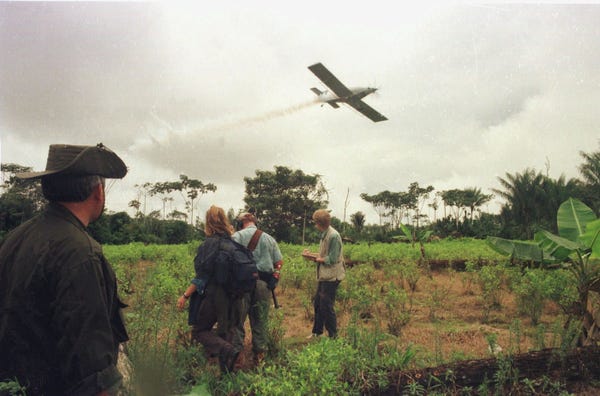 The government has set clear annual benchmarks for eradication, and key regional military commanders have a quota of how much to eliminate each month. Finding enough hectares of coca to meet their goals is not always easy. Cultivators have moved many of the largest plots to areas that are legally protected from eradication, such as Indigenous reserves and natural parks.

For example, just 14,000 of the estimated 35,000 hectares in Narino province, a hotbed of coca production on Colombia’s Pacific coast, are eligible for eradication, according to the military. To meet their targets, commanders say they have to venture to the most remote areas, or sometimes target small-hold farmers or communities that had previously expressed an interest in the government’s crop substitution program but who were still awaiting help.

In some cases, security forces conduct eradication in areas without paved roads or places that rely on river transport.

In these remote areas, cultivators told me that the only faces of the Colombian state they encounter in their daily lives are the military, coming to destroy their livelihoods. As one put it, “the only investment that we have seen is the investment of the armed forces, who have only brought us pain and sadness … They have turned our communities into a war zone.”

Rural communities sometimes push back, as farmers have learned that their best defense is to organize themselves. In some places, community councils might meet to decide whether to protest or try to negotiate with the military to limit eradication. Cultivators say that in some communities, residents take donations to cover the costs of transportation so that farmers can gather and protest against an operation. 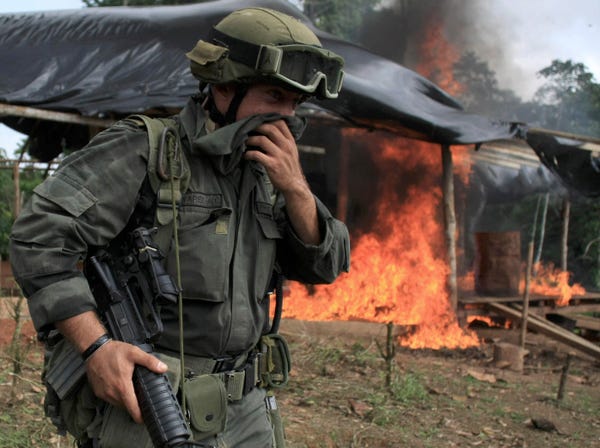 Armed groups that traffic in coca prey upon these dynamics. Often functioning as the de facto authorities in coca-growing zones with few public services, these groups put implicit or at times explicit pressure on residents to resist eradication efforts.

Many cultivators would likely do so anyway, but knowing that traffickers are watching, they have little choice. In some cases, armed groups raise the stakes, planting land mines around coca plots to ward off soldiers.

Too often, this hostile climate sets off a cycle of violence. In cases where troops and cultivators fail to negotiate an agreement — for example, by trading partial eradication for an agreement that the military leave the area afterward — soldiers may find themselves clashing with protesters, who often include women and children. These missions tend to be unpopular with soldiers, all the more so in areas where there are land mines.

Eradication can also tear communities apart. Depending on whether they join in protests or not, neighbors can face accusations of acting on behalf of either the state or local traffickers. Sometimes, they face reprisals. “Eradication is putting neighbors in conflict with one another,” one community leader told me.

Like others interviewed, he asked to remain anonymous because of the risks of retaliation. “If there is eradication, the farmer with coca will blame his neighbor for informing on him. Then that person will have to leave. The word sapo [informant] is dangerous here.” 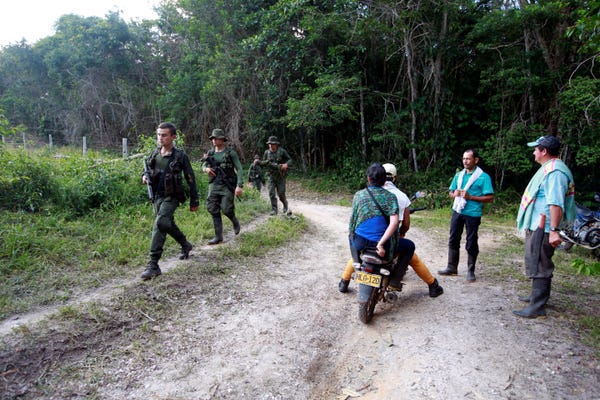 The shattered trust between farmers and the state can linger for years, but both manual eradication and aerial fumigation are effective for only a few months. Cultivators have learned to leech the pesticide from coca branches and grow the plants back. Between 50% and 85% of land that has seen manual eradication is replanted with coca, according to estimates from the United Nations Office for Drugs and Crime and the Colombian military.

Farmers who do not replant sometimes move to more remote zones and return to coca cultivation there. Since the gains are temporary, maintaining them would entail a prolonged state security campaign in the Colombian countryside. Eradication must be ceaseless for it to work properly, and many battalion commanders are upfront in acknowledging the futility of the task.

So long as the government places such a heavy emphasis on eradication, peace in Colombia’s countryside will be difficult to achieve. Eradication is ultimately a tool of last resort that, if deployed too broadly, can undermine stability and punish the poor farmers who grow coca as a way to survive.

There is, however, another way. A majority of the estimated 215,000 families in Colombia who grew the crop in 2016 pledged to voluntarily eradicate their coca through the crop substitution program that was enshrined in the peace accord.

The Colombian government could focus its resources to making this program work, including by enacting the rural reforms that farmers will need in order to make a living off of legal crops. It could also focus on land access and titling reforms, as well as creating improved credit opportunities and market access for farmers. As Colombia’s strongest partner on drug policy, the United States can and should assist with these efforts.

By shifting in this direction, Bogota and Washington can help put Colombia on a path toward a more peaceful and stable future. But first, they need to stop doubling down on a strategy that could well make that future harder to reach.

This article is part of a regularly occurring series of briefings by analysts of the International Crisis Group.