Data on India’s burgeoning farm exports is not correct

A closer look at the data reveals that a lot of the items are not part of this calculation. The notable ones include buffalo meat, marine exports, raw cotton, and plantation crops such as tea, coffee, rubber, etc. 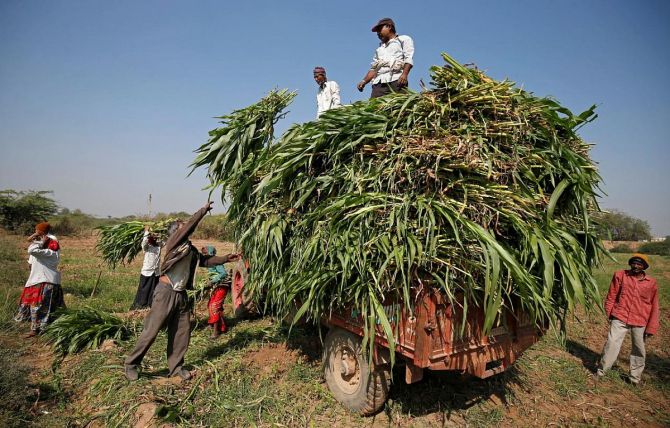 Agriculture exports have been an outlier in the first six months of the financial year — a period that saw the economy slowing down due to the Covid-19 lockdown and drop in global demand.

While exports of all other commodities suffered, agriculture held the fort.

The agriculture ministry claimed that between April and September 2020-21, or FY21 (the latest available data is till September), India’s agriculture exports rose almost 34 per cent in dollar terms, from $5.34 billion to $7.14 billion.

However, a closer look at the data reveals that a lot of the items are not part of this calculation.

The notable ones include buffalo meat, marine exports, raw cotton, and plantation crops such as tea, coffee, rubber, etc.

Together, these items constitute a sizeable chunk of the overall farm sector exports.

Buffalo meat is also one of the country’s largest agriculture exports, after basmati and non-basmati rice.

The data sourced from the Department of Commerce shows that if plantation crops, raw cotton, and marine products are included, India’s total farm exports — including livestock — would work out to $18.10 billion during April-September, which is 1.03 per cent less than the same period last year.

In fact, the data shows that during the April-September period of FY21, not all items showed uniform rise.

Spices have tumbled almost 3 per cent, from $1.96 billion to $1.90 billion in the April-September period.

The data shows that among the big crops, rice (both basmati and non-basmati), followed by sugar (both raw and refined) and raw cotton, has been the standout performer, even during the Covid months.

That shows the resilience of the sector.

In the case of raw cotton, the commerce ministry data shows that India has exported around $460 million worth of raw cotton in April-September FY21, which is over 105 per cent more than the same period last year.

For sugar, traders said India is estimated to have exported around 6 million tonnes (mt) in 2019-20 season that ended in September, of which around 5.7 mt have already left the country.

Non-basmati rice exports during the same April-September period were estimated at $1.95 billion, which was over 91 per cent more than the same period last year.

Basmati rice exports were estimated at $2.12 billion, which was 4.50 per cent more than the same period last year.

Experts say poor logistics in seaports and airports — along with stringent phytosanitary norms that sometimes act as non-tariff barriers, clubbed with frequent change in laws, such as the recent one in the case of onions — are some of the major impediments to India achieving the targeted growth in farm exports.

Interestingly, the new agriculture policy unveiled in 2018-19 had advocated doing away with arbitrary curbs on exports to make India a sustainable destination by 2022.

“I think agriculture exports, particularly of crop and cotton, have been good due to a bumper kharif harvest.

“This has made some Indian crops competitive, compared to their global peers.

“But for this to sustain, the logistics and transportation issues need to addressed. This will bring down the transaction costs,” says Gokul Patnaik, chairman, Global AgriSystem, and former head of the Agriculture and Processed Food Products Export Development Authority.

Patnaik says in the case of phytosanitary issues, the number of incidents have gone down in the past few years since Indian traders have become more aware of global benchmarks and have started working with buyers to meet their requirements.

“But the government, too, must proactively address these issues as soon as they arise, given these are sometimes used as non-tariff barriers by the importing nations,” adds Patnaik.

Some months ago, a high-powered panel of experts constituted by the Fifteenth Finance Commission — to suggest measurable performance incentives for states to encourage agriculture exports — identified 21 crop value chains out of a laundry list of over 340 agriculture and commodities products that need to be developed to enable India to increase its agriculture exports from the current $40 billion to over $70 billion in the next few years.

This push will enable an estimated investment of around $8-10 billion in inputs, infrastructure, processing, and other demand enablers, which will, in turn, create an estimated 7-10 million additional jobs.

Such a boost to exports will also lead to higher farm productivity and farmer incomes.

The panel — that included senior representatives from the industry, academicians, and former bureaucrats — advised on the creation of a state-led export plan, with the private sector playing an anchor role and the Centre acting as enabler.