Disney Prefaces Some Older Films With Warning of Racist Stereotypes

“These stereotypes were wrong then and are wrong now,” a 12-second disclaimer on the Disney+ streaming service reads. 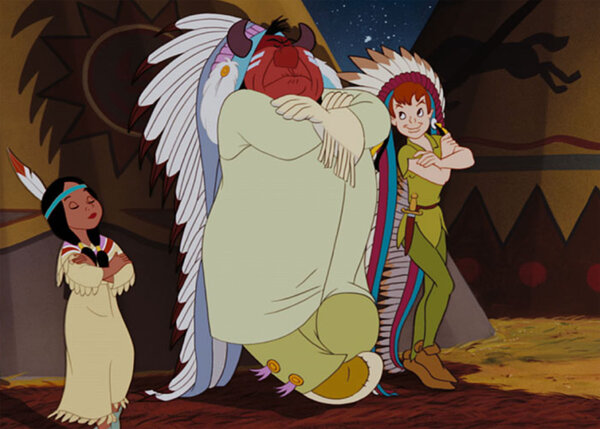 They are classic animated films like “Dumbo” (1941) and “Peter Pan” (1953), but on Disney’s streaming service they will now get a little help to stand the test of time.

Before viewers watch some of these films that entertained generations of children, they will be warned about scenes that include “negative depictions” and “mistreatment of people or cultures.”

The 12-second disclaimer, which cannot be skipped, tells viewers, in part: “These stereotypes were wrong then and are wrong now. Rather than remove this content, we want to acknowledge its harmful impact, learn from it and spark conversation to create a more inclusive future together.”

In addition to “Peter Pan” and “Dumbo,” the warning plays on films including “The Aristocats” (1970) and “Aladdin” (1992), and directs viewers to a website that explains some of the problematic scenes.

In “The Aristocats,” a cat with slanted eyes and buck teeth is a “racist caricature of East Asian peoples with exaggerated stereotypical traits,” the website says. The cat’s song about egg foo young and fortune cookies — Westernized foods — “mock the Chinese language and culture,” it says.

“Dumbo” includes a group of crows that “pay homage to racist minstrel shows,” the site says. The leader of the group of birds is named Jim Crow, a reference to the laws that enforced racial segregation in the United States. “Peter Pan” portrays Indigenous people “in a stereotypical manner” and refers to them repeatedly with a slur, it says.

Disney was advised by organizations such as the African-American Film Critics Association and the Coalition of Asian Pacifics in Entertainment, according to the site, which says a third-party “advisory council” is providing Disney with “ongoing guidance and thought leadership on critical issues and shifting perceptions.”

The disclaimer follows a similar, yet less extensive, warning from Disney in 2019 that told viewers: “This program is presented as originally created. It may contain outdated cultural depictions.”

Hemant Shah, a professor at the University of Wisconsin-Madison who studies portrayals of race and ethnicity in film and media, said that if white children consumed content with racist portrayals that went unchecked, it could “normalize the stereotype” for them and make it “normal for them not to call out stereotypes or racist behaviors they see in their lives.”

For children of color, it could lead to self-esteem issues, Dr. Shah said. “They may have a sense of, ‘That’s how I am?’” he said.

Though he was skeptical that the disclaimer would have a large impact on children, Dr. Shah said that racist scenes offered learning opportunities when children watched them with their parents at home or in the classroom as part of media literacy education. Disney “ought to also have some sort education program” about the stereotypes in conjunction with the disclaimer, he said.

The revised language was installed over the past week, a Disney spokeswoman said in an email on Sunday, noting that the original advisory had appeared since Disney+ kicked off in November last year.

Disney said in June that it would remake its Splash Mountain theme park ride, which includes characters and songs from the 1946 musical “Song of the South.” Disney has not made the musical available for over three decades because of the racist imagery it includes.

The updated warning comes as other companies have reckoned with racist or otherwise insensitive parts of their brands or products.

Quaker Oats said in June that it would change the name and packaging of its Aunt Jemima brand, which is based on racist imagery. A formerly enslaved person was hired to portray the character in the late 1800s, and in the 1930s a white actress who had performed in blackface played Aunt Jemima in a radio series.

Last month, the company that produces the Cream of Wheat brand of hot cereal said it would discontinue its use of a Black chef as the face of the brand to ensure it did not “inadvertently contribute to systemic racism.” Though the branding may be based on an actual chef from Chicago, the company said, the imagery “reminds some consumers of earlier depictions they find offensive.”

The popular YouTube personality Jenna Mourey, better known as Jenna Marbles, said in June that she would wind down her channel after she faced criticism for videos that she made in blackface as well as others that mock Asian people.