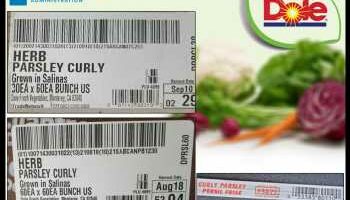 The recall involves Dole Curly Leaf Parsley, with harvest dates of August 18, and August 19. The product was distributed to retail stores, wholesalers, and distributors in two pack sizes. The company distributed 74 cases of 60-count pack and 39 cases of 30-count pack.

The recall was initiated after a positive non-O157 Shigatoxin-producing E. coli or STEC result was found on a single sample collected by the Michigan Department of Agriculture during routine random sampling.

STEC is an organism that can cause foodborne illness in a person who eats a food item contaminated with it. Symptoms of infection may include stomach cramps, diarrhea, and vomiting. The illness primarily impacts elderly individuals, children, and people with weakened immune systems. Most healthy adults and children rarely become seriously ill.

However, the company has not received any reports of illnesses related to the product to date.