Ether is at a fork in the road and the cryptocurrency faces a key resistance level at $2,700, Kraken analysts say | Currency News | Financial and Business News 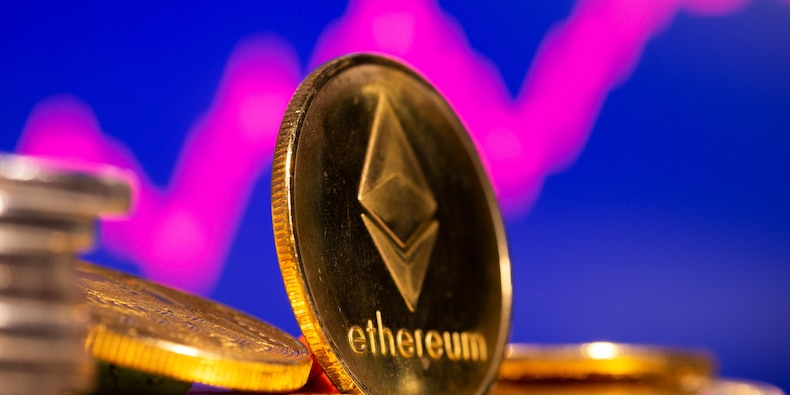 Ethereum’s cryptocurrency ether is at a fork in the road and faces a big test in climbing above $2,700, according to analysts at crypto exchange Kraken.

Kraken analysts, led by Pete Humiston, said in a review of the market on Wednesday that ether had jumped 35% and outperformed bitcoin’s 30% gain in March.

Yet they said: “When looking at historical price action, ETH is at a bit of a fork in the road.” The world’s second-biggest cryptocurrency stood at around $1,990 on Thursday morning.

Kraken said on Wednesday that chart analysis suggested ether’s next big level of resistance is around $2,700. If it passes this level, it could break into a higher band where the next resistance level is $5,000, the report suggested.

Yet the analysts added that there is a danger ether falls below the key support level of around $1,460, in which case it could drop into a lower trading band where the lower support level is $990.

Kraken’s report also said that the second quarter has historically been a good one for ether, which is yet to see a negative return in the period.

Ether has shot up more than 1,000% over the last year as interest in cryptocurrencies has boomed. It touched an all-time high of around $2,150 earlier in April and has traded around $2,000 over the last week.

Developers on the Ethereum network are set to make major changes to the system in July. The alterations will change how transactions work and start to destroy ether coins, which some analysts have said could lead to the price soaring.

Billionaire investor Mark Cuban told the Unchained podcast on Tuesday that he was bullish on ether and the Ethereum network, thanks to its many applications, including non-fungible tokens and smart contracts.

Yet cryptocurrencies continue to divide the financial world. Economist Nouriel Roubini on Tuesday reiterated his charge that bitcoin and other cryptocurrencies are too volatile and difficult to use to be currencies, on Bloomberg TV.

He questioned that there was any value in bitcoin and called it a “self-fulfilling bubble.”