Fauci: “Just About Everybody” Will Get Infected With Covid, Due To Omicron

“I think, in many respects, Omicron, with its extraordinary, unprecedented degree of efficiency of transmissibility, will, ultimately, find just about everybody,” said Dr. Anthony Fauci yesterday during a “fireside chat” with the Center for Strategic & International Initiatives. His comment came one day after the U.S. set an all-time record for daily infections, at 1.4 million, and also for test positivity, at 26%, per Johns Hopkins University.

Fauci went on to reference statements he made last year in which he said Covid would likely not be eradicated, but controlled, becoming an endemic problem, rather than a pandemic.

The U.S. currently has 63% of its population vaccinated. Last June, President Biden outlined a plan to have 70% of adults — then the only Americans eligible for the vaccines — get vaccinated by July 4. The country did not achieve that goal.

The percent of adults vaccinated is certainly higher now but the goal posts have shifted now that Americans as young as 5 are eligible to receive the shots. Even with the vaccines available to a greater swath of the U.S. population, the number of daily vaccinations has fallen precipitously from a 7-day moving average of 1.7 million in early December to about 900,000 this week. Given that, the goal of eradication seems less possible now than it may have least summer. 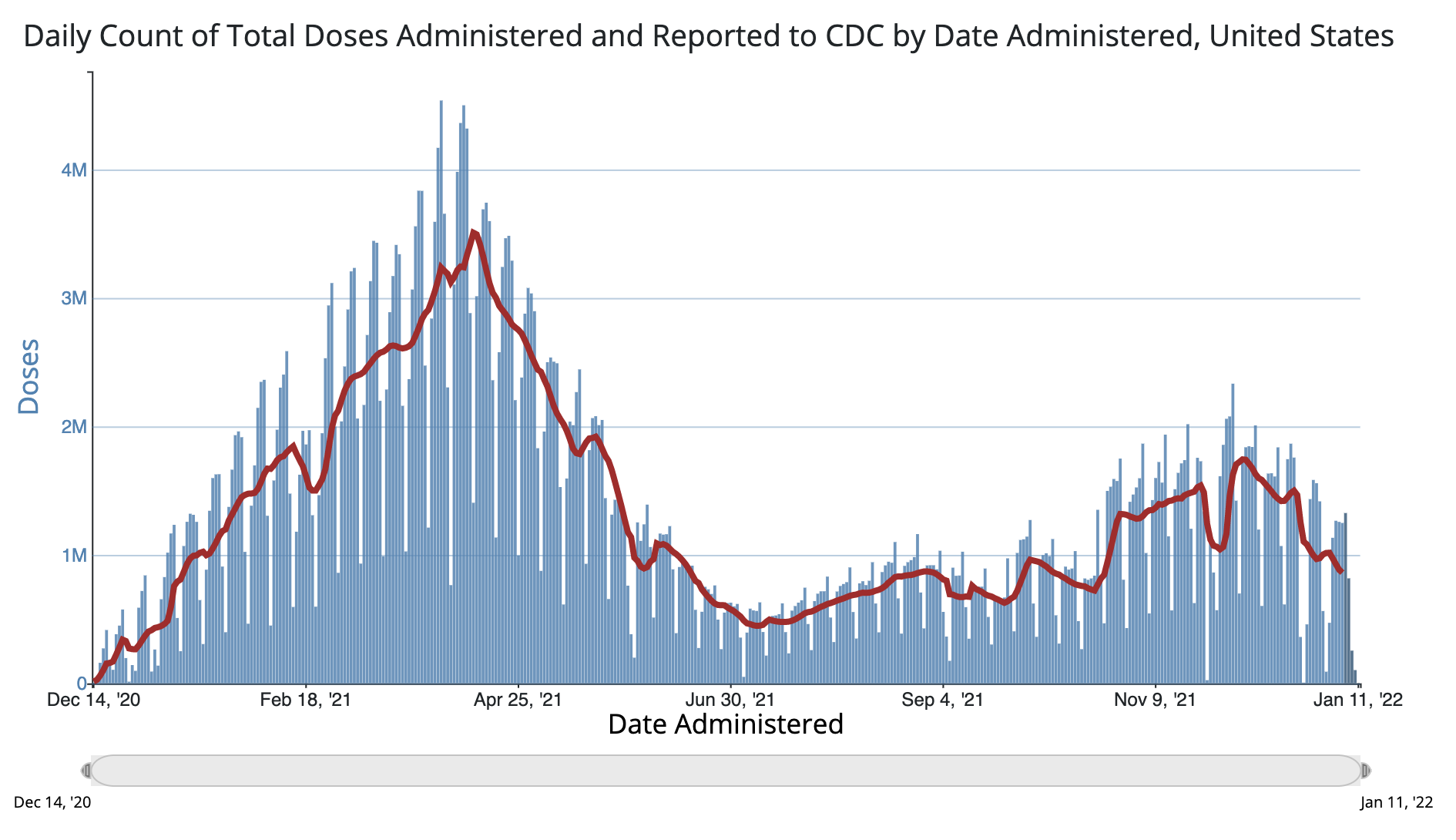 “People who are going to be vaccinated, we’ve seen that curve flattening out,” Dr. Tony Napolitano, whose company Wellstand provides testing services to events and film and TV productions, told Deadline last week. “I don’t think you can move the needle much on vaccination. So what’s left is social distancing, testing and masking, those type of things.”

Given that, says Fauci, there is now another goal.

“So what’s the box that we’re all looking at now? That box is control, namely, getting the level of infection that causes severe disease low enough that we can incorporate this infection – some people have said learning to live with it – that I believe we are possibly approaching that,” he said.

Acting head of the FDA, Janet Woodcock, told a Senate committee yesterday that not only will most people get Covid, but the nation’s focus may need to change, and ensuring the operability of emergency services is key right now.

“I think it’s hard to process what’s actually happening right now, which is [that] most people are gonna get Covid,” said Woodcock. “And what we need to do is make sure that the hospitals can still function [and that] transportation [and] other essential services are not disrupted while this happens. I think after that will be a good time to reassess how we’re approaching this pandemic.”

Fauci, for his part, said those and other practical matters are still a reason for Americans to get vaccinated.

“Those who have been vaccinated and vaccinated and boosted would get exposed. Some, maybe a lot of them, will get infected but will very likely, with some exceptions, do reasonably well in the sense of not having hospitalization and death.

“Unfortunately, those who are still unvaccinated are going to get the brunt of the severe aspect of this,” he said.