In mid-December, a top Trump administration official floated an enticing possibility: All nursing home residents in the United States could be vaccinated against the coronavirus by Christmas. “It’s really a remarkable, remarkable prospect,” Alex M. Azar II, the secretary of health and human services, declared.

It turned out to be a fantasy.

A month later, vaccinations of some of the country’s most vulnerable citizens are going more slowly than many state officials, industry executives and families expected. Their hopes had been buoyed when government officials said long-term care facilities would be at the front of the line for vaccines.

But the progress is uneven across the country and not nearly as comprehensive for different types of long-term care. For example, thousands of assisted living facilities — for older people who need less care than those in nursing homes — do not yet even have an appointment for their first visit from the pharmacy teams, in large part because states have given such facilities lower priority in their vaccine-distribution plans.

“I’ve had facilities call me, and I’ve had people cry, I’ve had people curse, because this was the first sign of hope that they’ve had in many, many months,” said Betsy Johnson, who leads a group that represents Kentucky’s nursing homes and assisted living facilities.

“It’s just human nature to think, ‘OK, but I was supposed to be first — and I don’t even know when my clinic is going to happen,’” Ms. Johnson said.

In Pennsylvania, teams from CVS or Walgreens are not scheduled to visit some nursing homes until February, and the vast majority of the state’s assisted living facilities have not yet been scheduled for a first visit, said Zach Shamberg, president of the Pennsylvania Health Care Association. 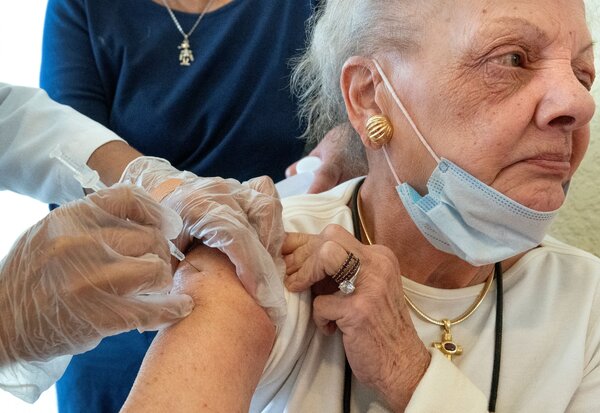 The pace of the vaccination program has taken on greater urgency as the rapidly spreading virus continues to decimate nursing homes and similar facilities. The virus’s surge since November has killed about 30,000 long-term care staff and residents, raising the total of virus-related deaths in these facilities to at least 136,000, according to a New York Times tracker. Since the pandemic began, long-term care facilities have accounted for just 5 percent of coronavirus cases but 36 percent of virus-related deaths.

Even as the vaccination campaign accelerates, the suffering is unlikely to wane. The coming months could be “the deadliest of the pandemic” for people living and working in long-term care, according to an analysis released on Thursday by the Kaiser Family Foundation.

The Trump administration announced in October that it had teamed up with CVS and Walgreens to lead a federal effort to vaccinate residents and workers at long-term care facilities, among the first eligible groups.

On Friday, CVS said it had given out just over one million doses in more than 12,000 initial visits to long-term care facilities. Nearly 8,000 visits are scheduled for the coming week. Walgreens said it had given out nearly 750,000 doses in nearly 9,000 visits to facilities, mostly nursing homes. The number of visits that Walgreens has scheduled with assisted living facilities “continues to accelerate,” a company spokeswoman, Rebekah Pajak, said.

The vaccinations by CVS and Walgreens were always expected to take several months because of the need to visit tens of thousands of facilities three times. The first two visits are for most residents and staff to get the two doses of the vaccine, with the third visit as a backup for people who missed the first clinic.

Answers to Your Vaccine Questions

While the exact order of vaccine recipients may vary by state, most will likely put medical workers and residents of long-term care facilities first. If you want to understand how this decision is getting made, this article will help.

Life will return to normal only when society as a whole gains enough protection against the coronavirus. Once countries authorize a vaccine, they’ll only be able to vaccinate a few percent of their citizens at most in the first couple months. The unvaccinated majority will still remain vulnerable to getting infected. A growing number of coronavirus vaccines are showing robust protection against becoming sick. But it’s also possible for people to spread the virus without even knowing they’re infected because they experience only mild symptoms or none at all. Scientists don’t yet know if the vaccines also block the transmission of the coronavirus. So for the time being, even vaccinated people will need to wear masks, avoid indoor crowds, and so on. Once enough people get vaccinated, it will become very difficult for the coronavirus to find vulnerable people to infect. Depending on how quickly we as a society achieve that goal, life might start approaching something like normal by the fall 2021.

Yes, but not forever. The two vaccines that will potentially get authorized this month clearly protect people from getting sick with Covid-19. But the clinical trials that delivered these results were not designed to determine whether vaccinated people could still spread the coronavirus without developing symptoms. That remains a possibility. We know that people who are naturally infected by the coronavirus can spread it while they’re not experiencing any cough or other symptoms. Researchers will be intensely studying this question as the vaccines roll out. In the meantime, even vaccinated people will need to think of themselves as possible spreaders.

The Pfizer and BioNTech vaccine is delivered as a shot in the arm, like other typical vaccines. The injection won’t be any different from ones you’ve gotten before. Tens of thousands of people have already received the vaccines, and none of them have reported any serious health problems. But some of them have felt short-lived discomfort, including aches and flu-like symptoms that typically last a day. It’s possible that people may need to plan to take a day off work or school after the second shot. While these experiences aren’t pleasant, they are a good sign: they are the result of your own immune system encountering the vaccine and mounting a potent response that will provide long-lasting immunity.

No. The vaccines from Moderna and Pfizer use a genetic molecule to prime the immune system. That molecule, known as mRNA, is eventually destroyed by the body. The mRNA is packaged in an oily bubble that can fuse to a cell, allowing the molecule to slip in. The cell uses the mRNA to make proteins from the coronavirus, which can stimulate the immune system. At any moment, each of our cells may contain hundreds of thousands of mRNA molecules, which they produce in order to make proteins of their own. Once those proteins are made, our cells then shred the mRNA with special enzymes. The mRNA molecules our cells make can only survive a matter of minutes. The mRNA in vaccines is engineered to withstand the cell’s enzymes a bit longer, so that the cells can make extra virus proteins and prompt a stronger immune response. But the mRNA can only last for a few days at most before they are destroyed.

The idea that all nursing home residents could get their first doses by Christmas was not a realistic prospect even when Mr. Azar, the health secretary, floated it 12 days before the holiday. By that point, some states had told the Centers for Disease Control and Prevention that they would not activate the federal program to vaccinate their nursing homes until Dec. 28. The logistics would have been challenging even if states had put a priority on getting their first doses to nursing homes.

Michael Pratt, a spokesman for the Health and Human Services Department, said Mr. Azar had been speaking only aspirationally about what states were capable of doing, since they had enough vaccine doses to cover all nursing home residents by Christmas. But that would have required that states place less of a priority on vaccinating high-risk groups like heath care workers.

T.J. Crawford, a spokesman for CVS, said the chain was making first visits to all facilities within four weeks of each state’s activating its vaccination program for nursing homes or assisted living facilities.

“This isn’t a drive-through or stadium vaccination effort,” Mr. Crawford said. “We’re visiting more than 40,000 facilities with an average of less than 100 residents, in some cases going room to room.” He said CVS was “on track and delivering on goals established and communicated early in the process.”

But a growing number of governors and state health officials have voiced frustration with CVS’s and Walgreens’ speed.

In Mississippi, some long-term facilities won’t get their first visit until Feb. 11, the state health officer, Dr. Thomas Dobbs, said this month. “We’re clearly disappointed with the progress in the long-term care program,” he said.

Some states and cities are exploring ways to hasten the inoculations.

Seattle is using its Fire Department to vaccinate nearly 1,000 residents and staff at adult family homes, a type of long-term care, by the end of January. Florida hired an emergency services company, CDR Maguire, to give out doses at 1,900 assisted living facilities that had not been scheduled for visits by CVS and Walgreens teams before Jan. 24.

In Michigan, officials have asked the federal government to let them work with other pharmacies, such as the supermarket chains Meijer and Kroger, to speed up the vaccination effort in long-term care facilities, said Bobby Leddy, a spokesman for Gov. Gretchen Whitmer.

West Virginia is the only state that is not using CVS and Walgreens. Relying mostly on local independent pharmacies, the state said on Dec. 30 that it had wrapped up the first round at its 214 long-term care facilities.

Some of the initially feared problems that could slow down the vaccine rollout in nursing homes have not emerged as serious obstacles, at least so far, according to facility operators and industry researchers.

Despite widespread worries that the vaccines’ side effects — which can include fevers, chills and fatigue — would cause staff to miss work and residents to need more care, that has not happened to any significant degree. And while there was early confusion about how nursing homes should get consent from residents or their families, that process has largely gone smoothly.

But other things are slowing the campaign. A significant number of long-term care workers have balked at receiving the vaccine. The virus’s spread is also delaying the process. People should not be vaccinated while they still have Covid-19 symptoms or are isolating, according to the C.D.C.

Outbreaks and cases of Covid-19 in some long-term care communities have led Walgreens to delay scheduling initial visits or to reschedule them, said Rick Gates, an executive leading the company’s long-term care vaccinations.

CVS has encountered the same issue, though it has not been widespread. The company has left the decision about whether to proceed with visits in such cases to local clinic team leaders and officials at the facilities, Mr. Crawford said.

Another factor is that some states did not quickly activate their programs to vaccinate people at assisted living facilities and similar communities. In some cases, they waited until weeks after they began vaccinations at nursing homes.

But many long-term care facilities include both nursing homes and assisted living. In those cases, pharmacy teams have been able to vaccinate only a subset of residents.

In Prairie du Chien, Wis., for example, a team from Walgreens on Thursday made its first visit to the local nursing home, Prairie Maison, to inject nearly all of its roughly 50 residents with the Moderna vaccine.

But Prairie Maison is part of a larger senior community, which includes about 50 assisted living residents. Because Wisconsin did not activate its vaccination program for assisted living until Friday, those residents weren’t offered the vaccine — even though they are in the same building as the nursing home residents.

“Vaccinating one group and not the other doesn’t make a lot of sense,” said Dr. Mark Grunwald, the chairman of Prairie Maison’s board.