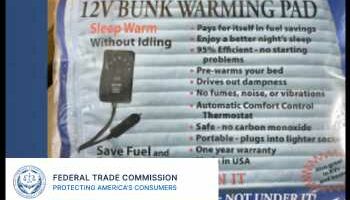 Ohio-based Electrowarmth sells mattress pads of varying sizes, with wires and thermostats that provide heat. The FTC alleges that Electrowarmth made false claims that its goods were made in USA, while they were actually made in China since 2019.

According to the complaint, Electrowarmth used U.S.-made textiles for mattress pads intended for use in truck bunks. Electrowarmth decided in 2019 to move production to China and stop using U.S.-made textiles as part of a cost-cutting move. However, it continued to market the heated mattress pads as “Made in USA,” “Made in the USA since 1939,” and “made-in-America products.”

Electrowarmth also misled their customers by asking the Chinese manufacturer to make and package the products “exactly the same” as they were previously manufactured in the U.S., the complaint said.

The FTC claims that Grindle and Electrowarmth violated the Textile Act and the Federal Trade Commission Act by labeling and advertising the origin of the textiles used in their products as the United States, when these textile fiber products were wholly imported from China.

The order also imposes an $815,809 monetary judgment, which is fully suspended due to Grindle’s and Electrowarmth’s inability to pay.