Georgia’s Senate Showdown: ‘All In’ Filmmakers See Tight Race As Showbiz Steps Up To Try To Secure Democratic Control – Q&A

Georgia’s Senate runoff races on Tuesday will determine control of the chamber, a hugely important vote that could determine the extent to which President-elect Joe Biden and Vice President-elect Kamala Harris can enact their agenda.

That fact has been top of mind as Democratic showbiz activists pour money and time into the races of Jon Ossoff and Raphael Warnock at a level greater than any recent runoff election. Although this typically is time for donor fatigue, recent weeks have seen a flurry of activity, including cast reunions of Elf, Hamilton and Veep. Members of The Wire cast reunited for a virtual get-out-the-vote event over the weekend. Outside groups like MeidasTouch.com quickly set their sights on the runoffs after the November election, and on Monday night, Alyssa Milano is headlining a national call-a-thon for the group Indivisible.

Through this cycle, Ossoff has raised about $1.6 million from showbiz sources, and Warnock has collected about $1.3 million, according to an analysis by the Center for Responsive Politics. Among those who have given to the candidates since the November election are Neal Baer, Eva Longoria, Ed Helms, Gwyneth Paltrow, Tom Hanks, Jennifer Aniston, Frances McDormand, Laura Linney and Jason Bateman. By contrast, Ossoff’s opponent, incumbent David Purdue, has raised just over $154,000, while figures were not available for Warnock’s rival, incumbent Kelly Loeffler.

Director Lisa Cortes said she is nervous about what very well might be tight races.

“A friend keeps sending me polls from Georgia, and I am like, ‘I didn’t ask for this, and they don’t know,’” she said.

Director Liz Garbus said, “They are all going to show them that they are so close that they are within the margin of error anyway, so it is like, ‘What is the point?’”

Cortes and Garbus are the filmmakers behind All In: The Fight for Democracy, now on Amazon Prime, which focuses on Stacey Abrams and her efforts to counter voter suppression in the state and elsewhere, whether that be through voter ID laws or marathon lines at polling places.

Deadline chatted with Cortes and Garbus on Monday about Tuesday’s vote and the bombshell revelation of a phone call that Donald Trump had with Georgia Secretary of State Brad Raffensperger, in which the president asked the state’s top election official to “find” the votes to swing his own race in the state in his favor. Georgia already has certified the result for Biden, and Raffensperger resisted the president’s pressure.

DEADLINE: The big news today is this phone call tape of the president pressuring the Secretary of State of Georgia to “find” the votes to overturn the election.

LISA CORTES: The people have spoken, and there have been several and various ways that they’ve tried to discover if anything egregious happened, and there wasn’t. The secretary of state, who is not always on the right side of history when it comes to voting rights in Georgia, has done the right thing in this case.

LIZ GARBUS:  I do think it has to be put in the context of a governor and secretary of state who have really done their damnedest to suppress the Black and brown vote in Georgia, and have been sued over and over and over again to provide access to polling sites, to allow folks with different first written languages to be eligible to vote, despite their exact [ballot signature] match program. They have tried so many different ways to disenfranchise voters, but Trump’s level of criminality — which he was requesting of them — was clearly a bridge too far for them.

DEADLINE: What do you think of the fact that Georgia’s governor, Brian Kemp, is now a target of the president? 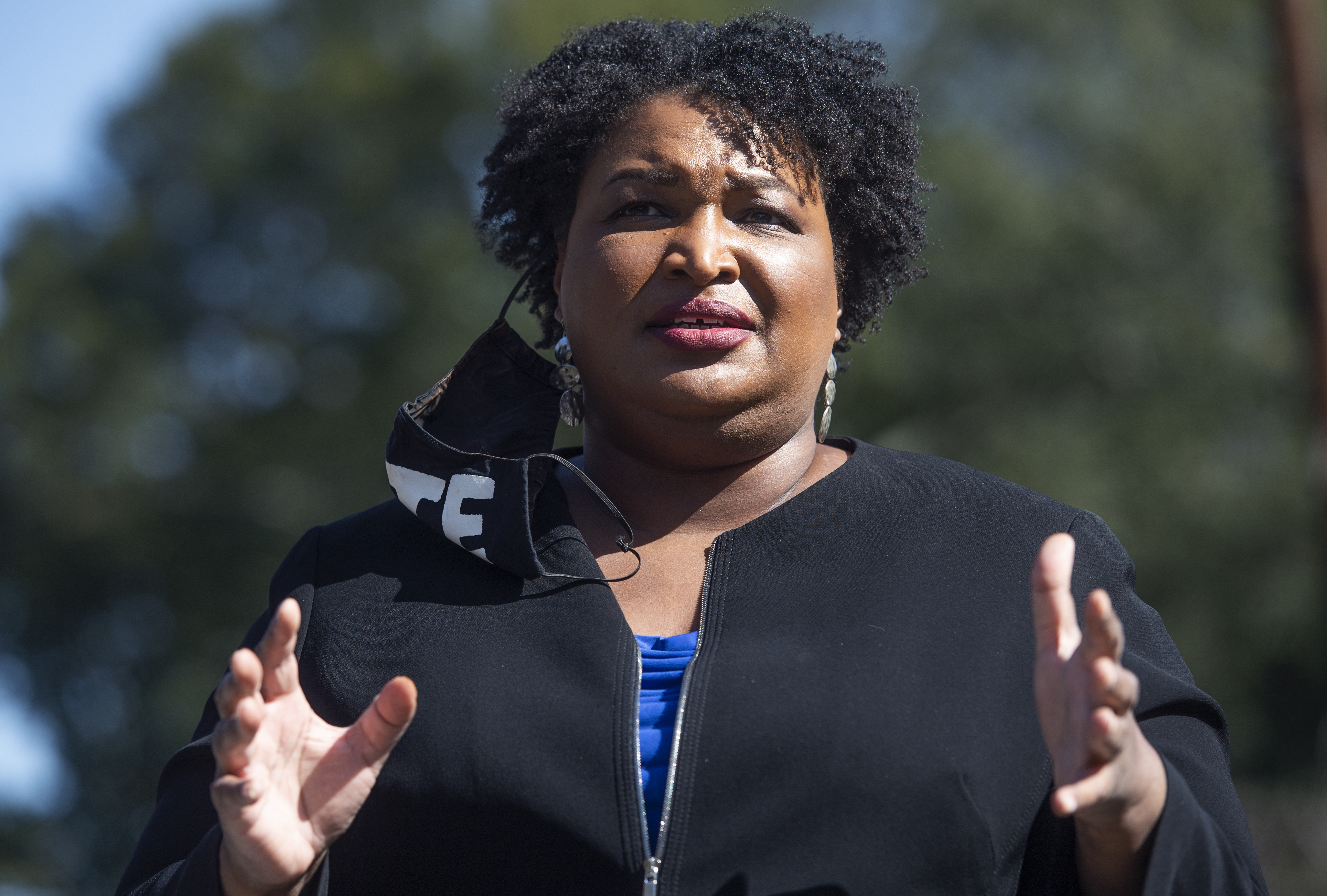 GARBUS: It’s very rich irony. Brian Kemp was the secretary of state when Stacey Abrams was running for governor. He was her opponent. He was able to make the rules, right? We see how much Raffensperger, how much control he has of their election process. Kemp was in that position during his own election, and it’s absurd that he was not required to recuse or choose to recuse. … It’s a very rich plot twist, and it’s certainly not something that we had expected. … Stacey says voter turnout is the best antidote to voter suppression, and that’s what we see in Georgia. We see that voter turnout and organizers — like Stacey, like the New Georgia Project, Black Voters Matter, Voto Latino — have mobilized and out-organized, incredibly, these laws which can make it extremely difficult for Georgians have access to the ballot.

DEADLINE: Do you see that same level of energy of organizing on the ground for the runoffs that you saw in the general election?

CORTES: Historically, Black people in the South are master organizers who have been working for many years to combat voter suppression tactics. And what we saw in the general election was messaging and engagement with a base that is really now a rainbow coalition. There is a new South, and the new South is sharing its voice and voting for people who are responsive to the needs of their communities when it comes to equity, when it comes to employment and health care.

GARBUS: There is one piece of data which I find so extraordinary. These organizers have been able to turn out 100,000 Georgians who didn’t vote in the November elections. They are voting in the runoff. … It is totally counter to everything we know about voting patterns, and these organizers have done it.

CORTES: In addition, you’ve got the 3 million people who have already voted early. That is unheard-of in a runoff.

DEADLINE: Trump seems like he’s going to be constantly attacking the integrity of this election, saying things like huge numbers of dead people voted. Will that hinder efforts to roll back restrictions on voting, like voter ID laws?

CORTES: It will hinder it, but I think what our focus needs to be on is the necessary change to repair our country. Let’s have a Senate where the John Lewis Voting Act can be passed or the [Equal Rights Amendment] can be passed or the stimulus to all the people who are hurting as a result of this pandemic. There will always be this roar and the dissenter, but I think the truth is very different, and the needs of the people are so far-reaching at this time.

DEADLINE: What do you think the biggest impact the documentary had on the November election?

GARBUS: We know that people who watched the film came onto our website and interacted, millions and millions of people seeking voter registration info, to check their registration, to check their polling place, become poll workers. … In an incalculable sense … when you realize that [polling place] lines are kind of part of a plan to disenfranchise you, then I think you’re more committed to put up with this ridiculous barrier. It shouldn’t be that way … but I do see that once people sort of appreciated the bigger plan, they were steeled in their convictions to show up and be counted.

CORTES: People were moved by Stacey’s story, not only her connection with the broader history but how, as an individual, she found the means to create this coalition, to do the work and to be a part of the change, to look voter suppression squarely in the eye and find ways to mobilize and engage and fight it.

‘All In: The Fight For Democracy’ Review: Stacey Abrams Urgent Voting-Rights Documentary

DEADLINE: Are Trump’s claims of election fraud another kind of voter suppression?

GARBUS: Absolutely. … It is basically wishing that you had a different electorate, as opposed to developing policies that appeal to the changing population of your state.

CORTES: I think people need to be very careful in differentiating voter fraud from voter suppression. Voter fraud that the president speaks about is unfounded. Voter suppression that many Georgians and many other people in our country have experienced for centuries is real, and it’s still alive.

DEADLINE: What worries you the most about the process for the runoff elections?

GARBUS: Democrats were voting early and by mail in the general election, and Republicans showed up on Election Day. Those were counted first in November, [and it] was a way that the oxygen was created for Trump to advance his ideas that he won because you saw early leads because those votes were counted first. What we have to prepare for is that it will take some time for all these votes to be counted. Millions and millions of people have already voted by mail. Those votes have not yet been tabulated. So I think we just have to have patience. And I think it’s going to be a nail biter. It’s going to be very close. We see that from all the data in the state, and I think we have to have patience, that if it takes a little while, that means the system is working.

DEADLINE: What are people most surprised about in the documentary?

CORTES: I think people oftentimes are not aware that this push and pull of access to the franchise and retrenchment is something that has been going on for centuries, that the foundation of our country is based on a very limited notion of who can vote and exercise thus right. It has been a long and tortured journey for allowing people of color, women, indigenous people, young people, Latinx people, Asian Pacific Islanders. Sometimes we’re caught up in this moment and we don’t have a look at the long tail of history. And the long tail of history shows as this is a part of our dance with democracy and the power play of who is able to engage.

GARBUS: I think things like ID laws, they seem on the face of it to be fair. “OK. Why shouldn’t you have to show ID when you show up to vote?” But then we peel back the layers about how those laws are enforced, and what is actually in them, and [find] things like in Texas, your gun license will let you vote but not your public housing ID. I think people are coming away with an understanding how these laws are really working and are able to cut through some of the B.S. about what they’re really there for.