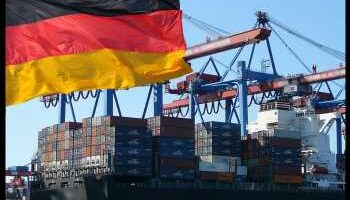 Germany’s exports declined for the second month in a row, as the global demand continued to be damped by high inflation and supply chain disruptions, and the biggest euro area economy is near recession. Yet, the trade surplus increased notably due to the sharp decrease in imports.

At the same time, the monthly decrease in imports deepened to 3.7 percent from 2.2 percent. This was also bigger than economists’ forecast for a 0.4 percent fall.

As a result, the trade balance closed October with a surplus of EUR 6.9 billion, which was higher than the EUR 2.8 billion in September. In the same month last year, the surplus was EUR 12.2 billion.

Exports to the Eurozone countries dropped 2.9 percent and imports from the currency bloc decreased 5.2 percent.

Most German exports went to the United States in October. Nonetheless, exports decreased 3.9 percent but imports from the US climbed 2.7 percent. Meanwhile, shipments to China remained unchanged and imports from the Asian country gained 0.8 percent.

Elsewhere, a survey among German exporters, conducted by the ifo Institute, showed an improvement in their expectations. Currently, positive and negative assessments are roughly balanced.

“Small glimmers of hope are emerging for the German export industry,” President of the ifo Institute Clemens Fuest said.