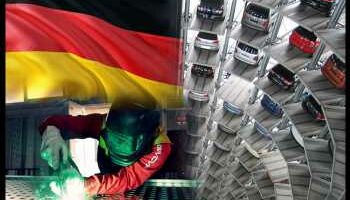 Germany’s industrial production decreased unexpectedly in May as the supply bottlenecks continued to weigh on the automotive sector, official data revealed Wednesday.

Industrial production fell 0.3 percent month-on-month in May, the same pace of decline as seen in April, data from Destatis showed on Wednesday. Economists had forecast output to grow 0.5 percent after April’s initial estimate of -1 percent.

On a yearly basis, industrial output growth moderated to 17.3 percent from 27.6 percent a month ago.

Compared with February 2020, the month before restrictions were imposed due to the corona pandemic in Germany, production was 5.0 percent lower in seasonally and calendar adjusted terms.

Excluding energy and construction, industrial production was down 0.5 percent.

Within industry, consumer goods output showed an increase of 4.1 percent and the production of intermediate goods was up 0.6 percent. Meanwhile, capital goods output dropped 3.4 percent.

Outside industry, energy production dropped 2.1 percent in May, while construction output climbed 1.3 percent.

The economy ministry said the outlook for industrial activity as a whole remains positive in the view of continued high demand as well as significant improvements in the business climate and export expectations.

While the auto sector is still not firing on all cylinders, the big picture is that the rest of the manufacturing sector is doing reasonably well, Andrew Kenningham, an economist at Capital Economics, said.

In the latest Summer Forecast, published by EU on Wednesday, Germany’s GDP is expected to grow 3.6 percent in 2021 and 4.6 percent in 2022. This is somewhat higher than projected in spring, largely due to the faster improvement in the health situation and more favorable trends in business confidence.