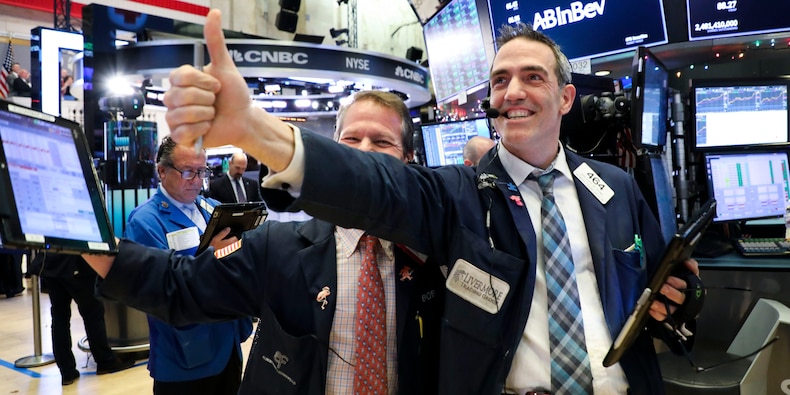 Global stocks were trading near record highs on Friday after US jobless claims tumbled to a pandemic-era low and China said its economy grew 18% in the first-quarter of 2021.

Futures on the Dow Jones, S&P 500, and Nasdaq whipsawed between gains and losses, suggesting a mixed open when US indices start trading later in the day.

US jobless claims for the week through April 10 fell to 576,000, beating economist expectations of 700,000. That is the lowest unemployment figure since claims soared at the start of the pandemic.

Outperformance of technology stocks led the Nasdaq to gain 1.31% on Thursday, taking it to within half a percent of its record close. Yield on the 10-year Treasury fell 11 basis points on Thursday, before bouncing back to 1.58%.

Key figures released by Chain’s statistics bureau pointed to a continued rebound, but they are perhaps unusually strong in comparison with last year, when the economy contracted in response to the pandemic.

UBS said while investing at all-time highs may be daunting for some, it expects more upside ahead and predicts the S&P 500 could end the year at 4,400, roughly 5% higher than where it is right now.

“As the economic reopening accelerates in the coming months, we believe the bull market remains on a solid footing,” said Mark Haefele, chief investment officer at UBS Global Wealth Management. “We maintain a cyclical bias and prefer US consumer discretionary, energy, financials and industrials. We also retain our preference for value versus growth, as well as for small- and mid-caps over large-caps.”

Elsewhere in Europe, the head of Germany’s disease control agency said people need to drastically reduce contact to curb a third wave of coronavirus infections. Cases in the country were up by 31,117 on Thursday – the most since mid-January.

London-based research company Airfinity announced 1 billion doses of COVID-19 vaccines have been made so far. It forecasts the world could produce another billion doses in the next month alone as production ramps up.

Asian markets traded higher on the back of strong Chinese data.

“With the recovery happening as expected, the market anticipates that monetary policy will be normalized, and liquid margins tightened,” said Lynda Zhou, a portfolio manager at Fidelity International. “Overall, market sentiment remains fragile as it tends to react slowly to positive news and quickly to negative news.”