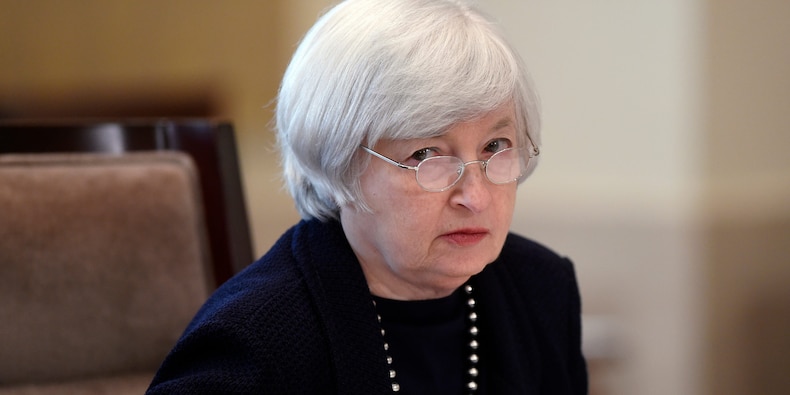 If her nomination is confirmed by the Senate, she would be the first woman to have led the Federal Reserve, the White House Council of Economic Advisers, and the Treasury Department.

Her appointment is a welcome choice for investors.

It shows that Biden is aiming for a centrist to a moderately liberal economic program, according to Deutsche Bank economists. “In Yellen, he has tapped a pragmatist, a skilled economist, and an experienced financial and regulatory policymaker,” they said.

Markets seem to have an air of confidence in Yellen, proven by the record-breaking Wall Street rally after the announcement of her selection as Treasury Secretary. The dollar index jumped 0.4% to 92.54.

The Treasury market has remained relatively immune to the announcement, however. Yellen is a familiar figure to bond traders from her time at the helm of the Fed. Yields on the benchmark 10-year note edged up to around 0.88% from a low this week of 0.82%, but are little changed from where they were a week ago.

The bond market, like stocks and currencies, is more subject to the confidence among investors about the rollout of a vaccine and the impact of that on the broader economy. Here are some implications of Yellen’s appointment for financial markets.

She is seen as someone who’ll coordinate well with the Federal Reserve and be market friendly, Deutsche Bank said.

“People are familiar with Yellen from her tenure as Fed Chair, and she is relatively dovish, both of which are pluses for markets,” said David Schneider, a financial advisor at Schneider Wealth Strategies.

“Her experience during both the Asian financial crisis and the global financial crisis make her an ideal choice to navigate the challenges we face in getting through the COVID-19 slowdown,” he said.

Given her history as chair of the Federal Open Markets Committee, the US economy is likely to see close coordination of fiscal and monetary policy, according to Scott Ruesterholz, a portfolio manager at Insight Investment.

This coordination was a key feature of the initial policy response under the CARES Act, though it has frayed recently, most notably with Secretary Steve Mnuchin’s decision not to extend the Fed’s Emergency Lending programs.

As Treasury Secretary, Yellen is likely to seek to reopen these facilities or launch new ones to assist damaged parts of the US economy, Ruesterholz said.

“We are likely to see even closer coordination of fiscal and monetary policy in 2021 than we did in 2020, which can be supportive of the growth outlook and financials market,” he noted.

Relative to other rumored finalists, including Fed governor Lael Brainard, Yellen has more expertise in monetary policy and domestic economic matters than on international trade and diplomacy.

She’s also likely to seek out federal support for small businesses which could allow firms to take out a second Paycheck Protection Program loan and target relief at hard-hit industries like the airlines, Deutsche Bank economists Peter Hooper and Matthew Luzzetti said.

Yellen is fully supportive of Biden’s focus on first containing the virus to get the economy back on track.

The Fed intervenes in foreign exchange markets if needed, but defers to the Treasury to call the shots. A Yellen-led Treasury won’t direct the Fed to intervene to push the dollar one way or another, but will coordinate to intervene to smooth markets as needed in the unusual event that they become “disorderly” or highly volatile, Hooper and Luzzetti said. “In brief, dollar policy can be expected to return to an even keel under Yellen.”

Another strategist believes she will sail through the nominating process as she’s a popular figure and has gained bipartisan support for her other posts in the past, including that of head of the central bank.

Her appointment will likely deepen the hand-in-glove relationship between the Treasury and the Federal Reserve. “Both the Treasury and the Fed can be expected to push ahead with expansionary policies, although a Republican Senate will likely continue to resist fiscal measures it deems too large,” according to James Solloway, chief market strategist at SEI Investment Management.

But critics may have an issue with her lack of private sector, or executive experience.

Read More: An innovation-focused portfolio manager at a $158 billion firm shares 8 disruptive stocks across multiple industries he thinks could grow 30% every year over the next decade