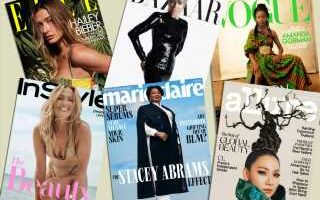 Since the killings of Ahmaud Arbery, Breonna Taylor and George Floyd last year, and the swell of racial justice protests that ensued — some resurfaced last week after Daunte Wright and Adam Toledo were killed by police — glossy fashion magazines have moved to bring more diversity and inclusion to their covers — both in front of and behind the camera.

But what about the diversity and inclusion of the companies that publish these magazines?

That picture has become clearer over the past few months as the three biggest consumer magazine publishers in the U.S. — Meredith, Hearst and Condé Nast — made their diversity numbers public for the first time. (For full transparency, and while not a fashion magazine publisher, WWD parent Penske Media Corp. has yet to release a diversity and inclusion report. In July, however, the company did note the breakdown of its board of directors.)

True, these numbers don’t tell the whole story as the big three magazine publishers did not break down figures for divisions and brands, but transparency is key when it comes to measuring change.

The overall findings show that while the big three differ on certain measures, much work still needs to be done, especially when it comes to getting more people of color through the door.

All of the Fashion at the 2021 BAFTA Awards

Here are more details on the findings from each company:

Meredith, the publisher of InStyle, People, Entertainment Weekly and more, whose figures also include its local broadcast network, said 77 percent of its workforce identified as white in 2020, 7 percent as Black, 6 percent as Hispanic, 5 percent as Asian/Pacific Islander and 5 percent as other. It did not break out separate figures for its magazine division, apart from to show that since September, 43 percent of new hires have identified as people of color.

The report also did not break out findings among senior leadership, but its corporate website showed that just one person of color sits on the publisher’s board.

As for the gender split, nearly 60 percent of the workforce at Meredith is female.

“We know that we have to make improvements in the area of bringing people of color into the organization. We’re being very transparent about that,” said Diane L. Parker, Meredith’s vice president of diversity and inclusion, who has been in the role for two months.

“We are striving to have a 30 to 40 percent diverse slate of candidates for each open role. We have also revamped our employee referral program and increased the incentives to entice our employees to make referrals as well. We are hiring a head of talent acquisition with a dedicated team focused on increasing the pipeline of BIPOC candidates. The other thing that we’ve been very successful at doing is rolling out unconscious bias training and 75 percent of all of our employees have completed that training.”

Among its magazines, InStyle, led by Laura Brown, has signed up to Aurora James’ 15 Percent Pledge. The title plans to highlight the work of Black creatives via photography, writing, styling and artistic projects.

“I’m an advocate for ensuring that our content is reflective of diversity and inclusion as well, and I think more and more of our brands have already started to focus on DE&I and have their own individual DE&I committees that are focused on our content and our commitment not only on our pages but behind the scenes as well,” Parker added.

Among senior leadership, 77 percent identified as white, 10 percent as Asian, 5.5 percent as Black and 3 percent as Latine.

Globally, 68 percent of the workforce identified as female and 32 percent as male. The publisher plans to offer a nonbinary option in its 2021 questionnaire.

Like InStyle, Vogue has also signed up to the 15 Percent Pledge.

Hearst, the company behind the likes of Cosmopolitan, Marie Claire, Esquire, Harper’s Bazaar, Town & Country and Elle, published its first diversity report at the beginning of February. As well as its magazine division, the report covered the whole company encompassing newspapers, television and more.

“This is a transformational change process. Just like any business plan, the journey does not have an endpoint. The strategy requires constant input, rigor and measurement. We’ve made progress on our DE&I strategy, with key programs, such as our yearlong Enlightened curriculum, and initiatives to maintain an enlightened workplace, and we’re committed to continuing that important work,” Keesha Jean-Baptiste, chief talent officer of Hearst Magazines, said in a statement.

“Over the past year and a half, our education and awareness efforts have been at the forefront with training partners who are driving change in various sectors of society. With their help, we are unravelling and uncovering bias by revealing both the root cause and systemic issues impacting underrepresented communities. This work is crucial to our success and allows for more connected and meaningful culture changes to take place. We are also highly focused on achieving proportionate representation in our workforce.”

For more from WWD, see:

The Magazines People Have Actually Been Reading During the Pandemic