How the fatal arrest of George Floyd unfolded

New York (CNN Business)It’s been 365 days since George Floyd was murdered by a police officer on a Minneapolis street. Many of the city’s residents and small business owners that serve them are still reeling from the fallout.

Local business leaders say rising crime and a divided state government have obstructed their city’s ongoing recovery from both the pandemic and the civil unrest that erupted following Floyd’s death. Business leaders also said the city’s uneven economic rebound has exacerbated its already troubling inequality, mirroring America’s K-shaped economic recovery.
Target (TGT), Walgreens (WBA), Cup Foods and other major corporations whose Minneapolis stores were burned, vandalized and looted last year have rebuilt, refurbished and reopened their locations. Some restaurant and retail chains have opted to permanently leave town, but it’s the city’s small business community that has struggled the most, in part because they lack state and federal government aid.

The local business community is counting on Congress to pass President Joe Biden’s American Rescue Plan Act to provide $500 million in funding to help the state’s recovery efforts, said Jonathan Weinhagen, president and CEO of the Minneapolis Regional Chamber. He noted that 47% of employment in the Twin Cities region of Minneapolis and St. Paul, Minnesota, comes from small business owners.

“Some businesses have been able to get back online and reopen their stores,” he said. “The flip side is businesses that were under-insured are staring at a pile of rubble.” 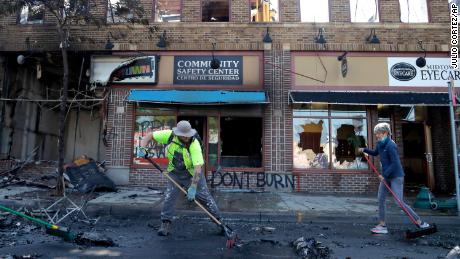 More than 1,500 businesses in the Twin Cities were damaged or destroyed between May 24 and June 16 of last year during the unrest following Floyd’s murder, according to a state House of Representatives daily session report published in February.
The city of Minneapolis has estimated it will cost $350 million to fully restore its buildings to what they were. Other officials pointed out many of those buildings were built decades ago and said it will cost much more to ensure they comply with current city and state laws governing new construction.
“We don’t have an accurate number, but it’s certainly more than $1 billion,” Democratic state senator Patricia Torres Ray told CNN Business. “Rebuilding Minneapolis is a very expensive proposal.”

Ray and other leaders pointed out Minnesota is the only state in the nation that has a divided legislature, with a Democratic majority controlling the state House and a Republican majority holding power in the state Senate.
Democrats in the House have supported a bill to provide a total of $300 million to Twin City businesses damaged during the riots, but Ray and several local business leaders said GOP state senators have refused to support the measure even though Minneapolis generates 3.5 times more in tax revenue than it receives in state aid, according to a February report published by local research firm MacCallum Ross. Ray said the report shows granting Minneapolis the relief aid it needs will benefit the entire state, not just the region.
“The Republicans in the Minnesota senate have argued that the damage that was done by rioters in the community is not something we have the obligation to rebuild,” Ray said. “This community has been impacted by the civil unrest and it’s no different than what happened during the tragic events of any other time.”
Ray said she expects state lawmakers to revisit the issue when they reconvene in a special session in June. State lawmakers ended their 2021 legislative session on May 17 without approving a proposed $52 billion budget. 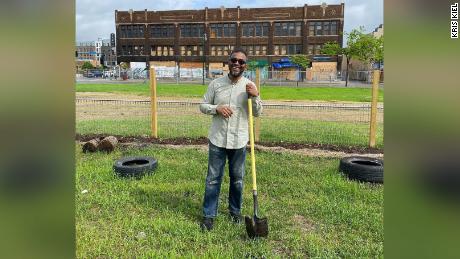 Minneapolis business leaders say much of the remaining damage is concentrated in areas of the city where a disproportionate number of people of color live and own businesses, including a two-mile stretch of Lake Street in South Minneapolis south of downtown.
The area suffered an estimated $500 million in damages, according to Allison Sharkey, executive director of the Lake Street Council, a non-profit business association that’s served the region since 1968.
Sharkey said warmer weather and vaccine distribution has restored “a feeling of hope” for the estimated 80% to 90% of Lake Street business owners who have reopened since last year’s riots ended.
“The ones that haven’t, maybe 50 that were completely displaced, a couple of them have returned to new locations,” she told CNN Business.
One of those business owners was restaurateur Ruhel Islam, 43, owner of the local Curry in a Hurry, a Bangladeshi and Indian restaurant that opened in October, five months after Islam’s former restaurant, Gandhi Mahal, was burned down.
The devout Muslim and married father of four became a local hero a year ago when he told reporters he didn’t care if his restaurant was destroyed because he too was angered by Floyd’s death.
“I was a little bit traumatized when I saw someone killing a man with a knee like you slaughter a cow,” Islam told CNN Business. “We value life over a building. We value life over properties.”

Islam said residents in his community responded to his overture by donating enough money for him to open his new temporary restaurant while he works with the Pangea World Theater to reopen a new and improved Gandhi Mahal restaurant in the future.
“We’re collaborating with them to build a restaurant, theater, outdoor space,” Islam explained. “Ultimately it will cost more money, but we don’t just want to rebuild. We want to build something better that’s a symbol to the world of peace, prosperity and success.”
Source: Read Full Article