London (CNN Business)A leading British retailer plans to feed 88,000 workers over the winter to help them cope with the surging cost of living.

John Lewis Partnership — which owns supermarkets, departments stores and provides banking services — announced on Wednesday that it would offer free food to all employees, including temporary staff and agency workers, during working hours for three months starting October.
Those working a four-hour shift will be eligible for one free meal, while those working eight hours can receive two, a company spokesperson told CNN Business.

Workers with access to staff cafeterias will be offered a range of options, including hot breakfasts, soups, curries, pasta dishes, and roast dinners on Sundays, the spokesperson said. The company’s truck drivers will receive pre-ordered packed lunches. 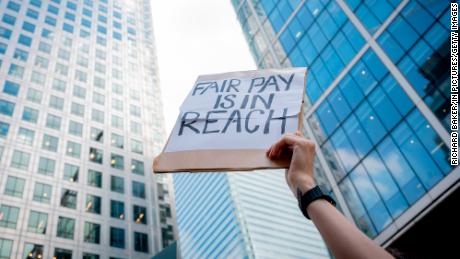 John Lewis is the largest employee-owned business in the United Kingdom, meaning that about 78,000 of its permanent staff are partners, receive a share of annual profits and have a say in how it is run.

The company says it wants to help employees as inflation soars to its highest level in 40 years. In July, consumer prices rose 10.1% from the year before, driven in part by the spiraling cost of food. Soaring energy prices are expected to push inflation even higher over the winter.
The situation has plunged millions of Britons into the worst cost-of-living crisis in decades, forcing many to choose between heating their homes and buying essential groceries.

There is more pain coming. The Bank of England forecasts inflation will rise to 13% before the end of the year, while analysts at Goldman Sachs expect it to hit a whopping 22% in January if natural gas prices don’t come down before then.

Two thirds of UK households, or 45 million people, are expected to fall into fuel poverty by the new year — defined as when a household spends more than 10% of its overall income on energy — according to researchers at the University of York.
In October, the average annual household energy bill for Britons is due to rise by 178% from the same month last year, driven by soaring wholesale costs that have been worsened by Russia’s invasion of Ukraine.
Source: Read Full Article