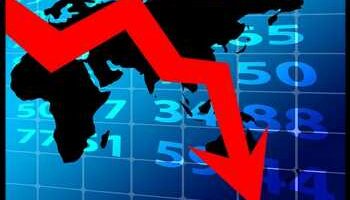 Asian stock markets are a sea of red on Monday, following the broadly negative cues from Wall Street on Friday, extending the sell-off amid rising prospects of sharper interest rate hikes by the US Federal Reserve in the near term after comments by US Fed Chair Powell that indicated the US central bank was preparing a 50 bps interest rate hike at its May meeting. Asian markets closed sharply lower on Friday.

Worries about growth amid the ongoing Ukraine war and the extended lockdown in Shanghai also hurt sentiment and triggered widespread selling.

In the currency market, the Aussie dollar is trading at $0.718 on Monday.

The Japanese stock market is sharply lower on Monday, extending the sharp losses in the previous session, with the Nikkei 225 down 500 points to stay below the 26,600 level, following the broadly negative cues from Wall Street on Friday, as trades are nervous following IMF comments that the yen’s recent plunge would hamper the pace of the economic recovery from the pandemic.

The major exporters are weak, with Sony and Canon losing almost 2 percent each, while Mitsubishi Electric and Panasonic are declining more than 2 percent each.

Conversely, there are no major gainers.

In the currency market, the U.S. dollar is trading in the lower 128 yen-range on Monday.

Elsewhere in Asia, Hong Kong, China and Taiwan are sliding between 2.1 and 2.4 percent each, while South Korea is losing 1.5 percent and Indonesia is down 1.0 percent. Singapore and Malaysia are declining 0.6 and 0.4 percent , respectively. New Zealand market is closed for ANZAC Day holiday.

On Wall Street, stocks moved steadily lower throughout the trading session on Friday, extending the sharp pullback seen on Thursday. With the steep drop on the day, the major averages slumped to their worst closing levels in over a month.

The major European markets also showed significant moves to the downside on the day. While the U.K.’s FTSE 100 Index slumped 1.4 percent, the French CAC 40 Index and the German DAX Index plunged by 2.0 and 2.5 percent, respectively.

Crude oil futures skidded on Friday on fears over falling energy demand and concerns about an economic slowdown. The dollar’s surge amid Fed’s aggressive stance on tightening monetary policy weighed as well on oil prices. West Texas Intermediate Crude oil futures for June ended down by $1.72 or 1.7 percent at $102.07 a barrel.