Jeff Bezos: the man behind the Amazon phenomenon

As Jeff Bezos is fond of reminding people, the world’s richest man started Amazon in his garage, personally driving packages of books to the post office for delivery.

Nearly a quarter of a decade later, he sits atop a globe-straddling online retail colossus employing 600,000 people, which last year became only the second company to be valued at $1tn by Wall Street.

His personal net worth, largely because of his holdings in Amazon, is a staggering $137bn.

Born in Albuquerque, New Mexico, to a teenage single mother, he was adopted by her Cuban husband Mike Bezos, and only learned he was not his biological father at the age of 10.

Bezos’ work ethic was forged, legend has it, between the ages of four and 16 during summers on his grandfather’s ranch in Texas.

There, in the southern heat, he toiled away at everything from castrating bulls to repairing windmills. 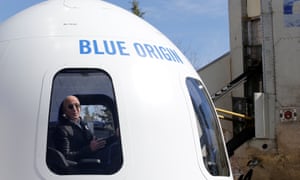 At the age of 16 he took a summer job in McDonald’s but later, with his girlfriend, set up a business called the Dream Institute, a 10-day creative thinking summer camp for young students.

After graduating from Princeton, where he majored in computer science, Bezos turned down offers from major technology players such as Intel to join a start-up called Fitel and later joined a hedge fund, where he was to meet MacKenzie Tuttle, later to become his wife.

He had, until then, deployed his financial analytic skills in the dating arena, co-opting the Wall Street venture capitalists’ term “deal flow” and applying it to his love life in order to boost his “women flow”. The couple announced in January they were to divorce, putting Bezos back into the (Amazon) marketplace and putting MacKenzie in the frame to be the world’s richest woman.

The sheer size of the Bezos fortune is largely thanks to his early recognition of the huge growth potential of the internet.

Seeing an opportunity to build a retail operation on a vast scale, he settled on books as a product that could be easily sold to the soaring number of web users. He left the hedge fund DE Shaw and he and Mackenzie moved to Seattle to start the business.

Amazon’s growth has been one of the stellar corporate success stories of the past 100 years.

He still owns 16% of Amazon, together with his space exploration company Blue Origin and a large property portfolio, as well as the Washington Post.

However, while his $137bn wealth has brought him great power, it has also put him on a collision course with one of the few people who is even more powerful, the US president, Donald Trump.

Bezos bought the Washington Post for $250m in 2013 and the newspaper has become a bete noire for the president because of its investigations into whether Russia helped the billionaire win the US election.

Trump enjoys a close relationship with the National Enquirer, with the tabloid admitting it ran a “catch and kill” operation, helping to buy a story about a sexual affair with a former Playboy model and burying it.

Bezos’ explosive blogpost, in which he accuses the National Enquirer of attempting to blackmail him over intimate photographs shared with Lauren Sánchez, a former TV anchor, makes several references to his clashes with Trump, in the context of his current battle with the newspaper.