Bill Barber saw an ad on Facebook last year for American Diesel Training Centers, a school in Ohio that prepares people for careers as diesel mechanics. It came with an unusual pitch: He would pay for the schooling only if it landed him a job, thanks to a nonprofit called Social Finance.

After making sure it wasn’t a scam, he signed up. After going through the immersive five-week program, he got a job with starting pay of $39,000 a year — about $10,000 more than he made before as a cable TV installer.

“I figured this was my best opportunity to succeed,” Mr. Barber, 23, said.

American Diesel Training is part of a new model of work force training — one that bases pay for training programs partly on whether students get hired. Early results are promising, and experts say the approach makes far more economic sense than the traditional method, in which programs are paid based on how many people enroll.

Right now, there are only a relative handful of these pay-for-success programs that train low-income Americans for better-paying careers. The challenge has been to align funding and incentives so that students, training programs and employers all benefit.

But Social Finance, founded a decade ago to develop new ways to finance results-focused social programs, is showing how the idea could grow quickly just as the pandemic made job-training programs more important than ever. The coronavirus put millions of people out of work, upended industries and accelerated automation. 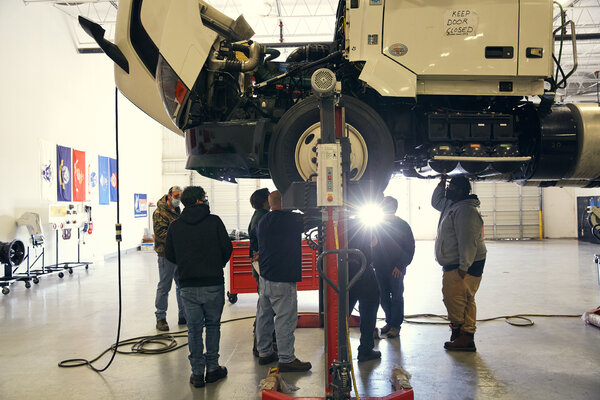 The Social Finance effort is powered by a fund of more than $40 million raised from philanthropic investors. The money goes toward paying for low-income students, as well as minority candidates and veterans, to enter the training programs. The group is not related to the online lender SoFi.

It has supported four job training programs, including American Diesel Training, in the past year. It has plans to have double that number a year from now.

Social Finance is advising Ohio on pay-for-success programs and is in talks with several other states. The financing arranged by Social Finance from investors is called a career impact bond, while the state-backed initiatives are called pay-it-forward funds — since payments from job-holding graduates help pay for new students.

A few nonprofits have a track record of lifting low-income Americans into higher-paying jobs, including Year Up, Per Scholas and Project Quest. Their training is tightly focused on specific skills and occupations, they work closely with employers, and they teach soft skills like communication and teamwork. But there are too few of them, and they struggle for sustainable financing.

Social Finance is seeking, designing and supporting new programs — for-profit or nonprofit — that follow that training formula but then apply a different funding model.

“There is emerging evidence that these kinds of programs are a very effective and exciting part of work force development,” said Lawrence Katz, a labor economist at Harvard. “Social Finance is targeting and nurturing new programs, and it brings a financing mechanism that allows them to expand.”

The social venture’s more than $40 million fund is seed money for demonstration projects that show its model could be widely used, whether backed by government or by investors in social programs, across a range of occupations including skilled trades.

“The goal is to create a tool for impact, to get more people on the economic escalator,” said Tracy Palandjian, co-founder and chief executive of Social Finance.

Philanthropies built with technology fortunes are prominent among the fund’s supporters. A large investor is Blue Meridian Partners, whose donor partners include the Bill and Melinda Gates Foundation, the Ballmer Group and the Sergey Brin Family Foundation.

Others contributing to the fund are the Michael and Susan Dell Foundation and Schmidt Futures, led by Eric Schmidt, former chief executive of Google.

For Social Finance and its backers, the career impact bonds are not traditional investments. For them, breaking even or a small return would be winning — proof the concept is working, which should attract more public and private money.

“We need to move toward evidence-based funding,” said Jim Shelton, chief investment and impact officer for Blue Meridian Partners and a deputy secretary of education in the Obama administration. “And Social Finance is supporting programs that show it can be done.”

The Social Finance income-share agreement with students ranges from about 5 percent to 9 percent depending on their earnings — less from $30,000 to $40,000, and generally more above $40,000. The monthly payments last four years. If you lose your job, the payment obligation stops.

When screening programs, Social Finance looks for those that offer training for specific skills linked to local demand, and have data to show that its students graduate and get good-paying jobs. In selecting a skilled-trade school, Social Finance, working with Burning Glass Technologies, which analyzes job-market data, sought a program for an occupation in demand with potential for the worker to move up the career ladder.

American Diesel Training, based in Columbus, Ohio, met the requirements. The for-profit company’s program is designed as a short, intensive course to train entry-level diesel technicians, mostly for trucking companies and dealerships.

Demand for diesel technicians is robust as more goods are shipped by truck, often delivering products ordered online, and baby-boom mechanics are retiring. There is an accessible career path to become a senior mechanic or into administration as a service, distribution or shop manager.

American Diesel Training, founded in 2017, succeeded in placing students in jobs in its first few years, but remained small.

“Social Finance comes at it from a completely different angle,” he said.

The first group of Social Finance-funded students started the five-week course last September. There are now about 70 students in each course. That is about four times as many as a year ago.

Social Finance pays American Diesel Training just over 60 percent of its fee initially. The rest comes later, after a student lands and keeps a job.

“I’m fine with that,” Mr. Spurlock said. “We’ve completely proven our educational model. The problem was the funding mechanism.”

A total of 229 students supported by Social Finance have been enrolled. The graduation rate is nearly 100 percent, and 89 percent have jobs. Their average annual income is $36,500, and the average gain from income before the program is $12,400.

Today, Mr. Barber, who saw an ad for the program on Facebook, works in Ohio for U.S. Xpress, a national freight-hauling trucker. As an entry-level diesel technician, he is mostly doing preventive maintenance on trucks. With diesel mechanics in demand, the company paid him a $2,000 signing bonus and a relocation fee.

Jordan Battle earns about $43,000 a year as a diesel mechanic for a large trucking company in Atlanta, far more than she did as a contractor for a civic education organization.

That job ended with the pandemic, so she decided to go for “something essential and to have a real skill others don’t.” She was accepted in the American Diesel Training program, and she was offered a job after three weeks, before she graduated. Practice interviews, résumé building and introductions to employers were part of the curriculum.

“That’s where the program really stands out,” she said. “They fight for you.”