(CNN)Jon Stewart walked away from “The Daily Show” almost five years ago, and a lot of fans still miss seeing him four nights a week. Assessing his legacy, however, goes beyond his shift into directing movies, including what he has accomplished off screen, and the roster of successors who cut their teeth on his show.

Four former “Daily Show” correspondents currently host latenight programs, each of whom brings a different flavor and particular strengths to the task at hand.
As Trevor Noah builds on “The Daily Show’s” success in Stewart’s former seat, Stephen Colbert, John Oliver and Samantha Bee all cast an acerbic satirical eye at the news, with Colbert enjoying the broadest platform on CBS, and Oliver cornering the Emmy market that Stewart once dominated with 10 consecutive wins as comedy variety series.

As for Stewart, there are still grumbles that he gave up his influential platform for, well, not much: writing and directing the movie “Irresistible,” which comes out this weekend, occasionally popping up on Colbert’s show (from under his desk) to dispense wisdom, and exploring other projects and deals that generally haven’t materialized.

Off screen, however, Stewart achieved a major victory, championing the Zadroga Bill, or the 9/11 Victim Compensation Fund, providing permanent support to those who became ill during the rescue and debris-removal operations that followed the 2001 terrorist attacks. After years of frustration — and Stewart’s impassioned testimony — the legislation passed Congress last July.

To understand Stewart’s post-“Daily Show” profile, though, requires going back to when he left, telling the audience that after a 17-year run, he was ready to move on.
“This show doesn’t deserve an even slightly restless host, and neither do you,” he said, calling his time as host “the honor of my professional life.”
Noah later provided additional insight into his predecessor’s state of mind, relating the following exchange with Stewart when he signed off: “He said, ‘I’m leaving because I’m tired.’ And he said, ‘I’m tired of being angry.’ And he said, ‘I’m angry all the time. I don’t find any of this funny. I do not know how to make it funny right now, and … I don’t think the show deserves a host who does not feel that it is funny.'” 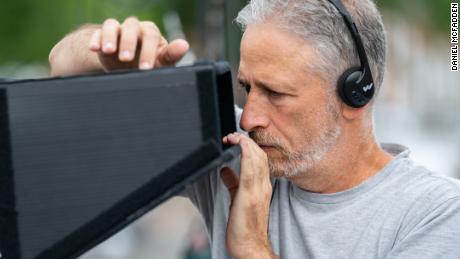 Notably, the latenight heirs weaned on “The Daily Show” all exhibit flashes of anger, and certainly passion amid unsettling times. That often requires achieving “being funny” while capturing the absurdity of the moment — a delicate balance that Stewart elevated to a high art.
People have various degrees of tolerance for the concept of artists (and yes, that includes comedians) becoming restless for new creative challenges. That’s not a luxury everyone possesses, and if you’re good at something — as Stewart demonstrably was — why make a change or rock the boat?
There was also a sense — among some of those to whom Stewart represented a nightly dose of sanity — that he had essentially abandoned them, at a moment when they, and the country, needed him most.
At the same time, if Stewart doesn’t feel a burning desire to be in our living rooms almost daily, it’s not like there’s an obligation to do so. Collider’s Matt Goldberg addressed that point in a piece summed up by its headline, “Jon Stewart Doesn’t Owe Us a Second Act.”
In a recent interview with the New York Times, Stewart addressed the expectations of his fans, but sought to redefine his career as less a monologue than an ongoing conversation with them.
“The enemy is noise,” he said. “The goal is clarity.”

Appearing June 24 on Colbert’s “Late Show,” Stewart provided sober, funny analysis of the state of affairs in the United States, before almost apologetically promoting his film. The key observation, though, belonged to Colbert, who told him, “I can hear your voice in that movie, and I miss it so much.”
It’s true that Stewart hasn’t made nearly as much noise over the last five years, and that can be seen as a loss. But if you watch the hosts he helped introduce, you don’t have to listen hard to hear his voice.