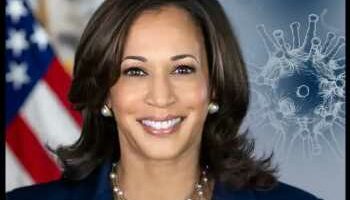 Vice President Kamala Harris will return to work on Tuesday at the White House after testing negative for Covid-19.

The 57 year-old Vice President has been in isolation and working from her residence since she was diagnosed with coronavirus infection on April 26.

Harris, who had received double booster shots of anti-coronavirus vaccine, was the highest-ranking member in the Biden Cabinet to report being infected.

The Vice President’s Press Secretary Kirsten Allen said in a statement that Harris tested negative for Covid on a rapid antigen test Tuesday.

“Following CDC guidelines, she will wear a well-fitting mask while around others through the ten-day period,” according to Allen.

Meanwhile, a sharp spike in the number of Covid positive cases was reported in the United States on Monday.

With a whopping 81646 new cases, the total number of people infected with the killer bug in the country has risen to 81,444,328, as per the latest data from Johns Hopkins University.

There is a 55 percent increase in cases in the last two weeks, according to the latest New York Times tally.

Hospitalizations due to the viral disease increased by 16 percent in the last fortnight.

17,220 patients are remaining in the country’s hospitals for treatment for the viral disease. Out of this, 1996 patients are admitted in intensive care units.

New York reported the most number of cases – 11699 – while Florida reported most casualties – 57.

80,757,424 people have so far recovered from the disease, the Worldometer tally shows.

As per the latest data published by the Centers for Disease Control and Prevention, 219,778,035 Americans, or 66.2 percent of the eligible population, have been administered both doses of Covid vaccine so far. This includes 90.3 percent of people above 65.

45.8 percent of the eligible population, or 100,724,751 people, have received a booster dose that is recommended to provide additional protection from the killer virus.

1783 additional deaths were reported globally on Monday, taking the total number of people who lost their lives due to the pandemic so far to 6,238,505.