The world's second-largest payment processor is approaching a decade-long run for the company's stock.

Shares of MasterCard are getting a boost, as U.S. consumers embrace the secular shift from cash to card, and more recently card to digital.

MasterCard's stock is up 46% this year, compared to the S&P 500 which is up about 20%. Even more remarkable, the financial company's stock is up more than 1120% since the start of 2011, while the broader market has only rallied about 140% since then.

MasterCard, which has a market value of about $279 billion, has ended the last nine years in positive territory, with most years accounting for double digit gains in the stock.

Some of MasterCard's success can be attributed to the health of the U.S. economy, currently in its longest expansion in history. A robust economy encourages customers to spend more, boosting fee income for MasterCard and other payment processors.

"In the near-term, consumer spend trends appear healthy, with MA's results through August resembling much of what we saw in 2Q," said Morgan Stanley's equity analyst James Faucette in a note to clients.

Overall consumer spending, which accounts for more than two-thirds of U.S. economic activity, increased solidly in July, despite a tit-for-tat tariff war between the U.S. and China weighing on both country's economies.

"We continue to see the consumer showing up well as it relates to consumer spending," MasterCard President Craig Vosburg told CNBC last month.

Bolstered by the strong consumer, MasterCard's revenue has grown more than 17% on average over the the past eight quarters, according to FactSet.

Moffett Nathanson said MasterCard has the next five years "in the bag."

"There are few (if any) other stocks for which you can have a comparable level of conviction that the company will deliver ~20% EPS growth, year-in, year-out, for at least the next five years," said Moffett Nathanson's Lisa Ellis in a note to clients.

MasterCard's short- and long-term success has landed it as one of the most well-liked stocks on Wall Street. Of the 38 analysts that cover the stock, 35 recommend buying MasterCard. Two analysts have a neutral rating and only one analyst recommends selling the stock.

Outperforming FAANG but pairing with Apple

Since October 2018, MasterCard, as a part of payment companies MVP (MasterCard, Visa and PayPal), has outperformed the so-call FAANG (Facebook, Apple, Amazon, Netflix and Google) stocks. 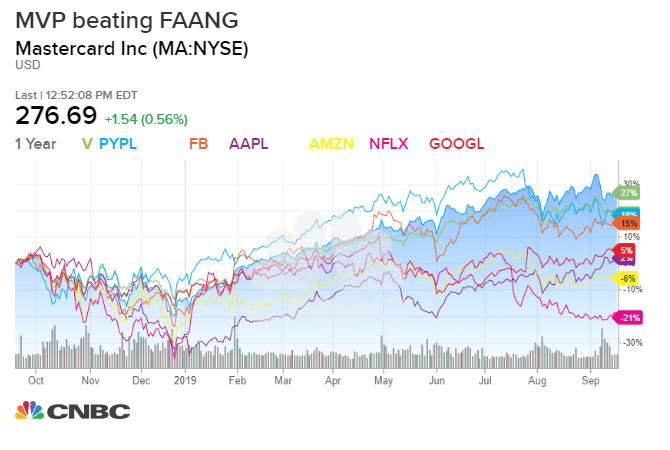 Apple device owners "are very closely connected to those devices and those devices are an important part of theirs lives. They shop and when they shop they transact," said MasterCard's Vosburg.

— with reporting from CNBC's Michael Bloom.