Mexico still has the most violent cities in the world, but new hotspots are emerging

For the fourth consecutive year, Mexico has dominated a list of the most violent cities in the world but smaller towns have shot up the rankings, reflecting new hotspots where criminal groups are fighting for control.

The most violent place in the world in 2020 was Celaya, a city of around half a million people in the central state of Guanajuato, according to the report by a Mexican non-governmental organization, the Citizen Council for Public Safety and Criminal Justice (Consejo Ciudadano para la Seguridad Pública y la Justicia Penal).

The Santa Rosa de Lima Cartel and the Jalisco Cartel New Generation (Cartel Jalisco Nueva Generación – CJNG) have been battling around Celaya over control of oil theft, drug trafficking and other criminal economies,

The situation is similar in nearby Irapuato, also in Guanajuato, which has gone from newcomer to fifth-most violent city in the world, with 823 homicides last year.

Located only a few hours away from Celaya and Irapuato, the city of Uruapan has climbed to eighth in the rankings, with a homicide rate over 72 per 100,000 habitants. It is the deadliest place in the state of Michoacán, which has seen regular clashes between the CJNG and about a dozen other criminal factions, all seeking control of key cocaine and fentanyl trafficking routes.

And the city of Zacatecas, in central Mexico, only appeared on the list in 2019 but broke into the top 15 most violent cities in 2020. This coincided with the CJNG invading 17 municipalities in Zacatecas state in April 2020, during the country’s first lockdown and clashing with the Sinaloa Cartel and other groups throughout the year.

Latin American and Caribbean cities made up the overwhelming majority of the list, claiming 46 of 50 spots. But notably, some of the most murderous cities of past years, such as Kingston, Jamaica or Caracas, Venezuela, have dropped below smaller Mexican newcomers. 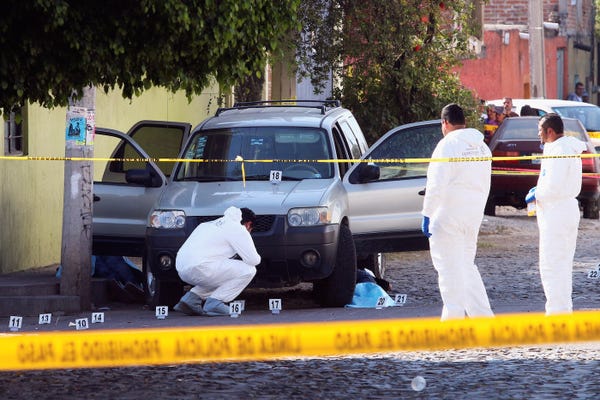 Bloodshed in Mexico has reached such a level that continued outbreaks of violence in individual, medium-sized cities can register on a global scale, due to larger cartels with a national presence facing smaller but entrenched adversaries.

In August 2019, InSight Crime reported that Irapuato, an important industrial and trade center in central Mexico, had become an unfortunate model for similar cities in the country. At the time, clashes between the CJNG and the Santa Rosa de Lima Cartel had already been raging since 2018.

The fighting is brutal but fragmented, having broken down into neighborhood- and street-level feuds that appear endless.

With the fall of Yépez Ortiz, his group began to internally fracture, with smaller groups claiming pieces of the illicit oil economy, leading to additional violence at the same time that the government was executing a plan to militarize the area.

Uruapan tells a different story as the climb in homicides there has been more sudden. While located in the western state of Michoacán, which has consistently been a patchwork of rival clans, Uruapan saw violence spike in late 2019 when the CJNG moved in and faced off against Cárteles Unidos.

The latter is an alliance between members of Los Viagras and Cartel del Abuelo, two Michoacán-based groups, who have teamed up to defend their control of drug trafficking routes.

Similarly, Zacatecas had actually seen homicides drop by 9% in 2019 before they spiked again in 2020 after the CJNG moved in.