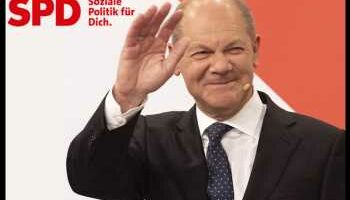 The center-left Social Democratic Party (SPD) has clinched narrow victory over the conservatives who suffered their worst-ever performance in the German federal election.

The SPD captured 25.7 per cent votes, its best result in years, while the CDU/CSU conservative alliance fell to a record low of 24.1 per cent after ruling the country in four consecutive terms under the leadership of outgoing Chancellor Angela Merkel.

The Green Party made history with 14.8 percent of the votes, and the liberal Free Democratic Party (FDP) has 11.5 percent.

With no party enjoying clear majority, the stage is set for these parties to enter coalition talks on Monday, German news agency dpa reported.

“This is a great success. Many voters made it clear that they wanted a change in government and that the next Chancellor is Olaf Scholz,” he said in Berlin.

“Three parties have been strengthened, therefore this is the visible mandate that the voters have formulated,” Scholz said at SPD headquarters on Monday, referring to his SPD, the Greens and the pro-business Free Democrats.

Laschet, who was fighting for political survival, said his party would do everything to try to build a coalition.

Both SPD and CDU/CSU need the support of the Greens and FDP, the parties with very different political agenda, to form a three-way ruling coalition.

Representatives of the Greens and the FDP were expected to come together to find common ground ahead of formal coalition talks with the two larger parties.

The next Cabinet will be the first in 16 years not led by Merkel, who will remain as Chancellor until negotiations reach a deal.