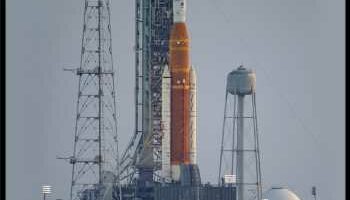 After the second attempt to launch the giant Moon rocket carrying Orion spacecraft for the Artemis I mission failed, NASA mission managers decided they will forego additional launch attempts in early September.

The 322-foot-tall stack, consisting of the Space Launch System rocket and Orion spacecraft, was re-scheduled to launch from Kennedy Space Center in Florida at 2:17 p.m. ET on Saturday.

The launch attempt failed when engineers could not overcome a hydrogen leak in a quick disconnect, an interface between the liquid hydrogen fuel feed line and the Space Launch System (SLS) rocket.

Over the next several days, teams will establish access to the area of the leak at Launch Pad 39B, and in parallel conduct a schedule assessment to provide additional data that will inform a decision on whether to perform work to replace a seal either at the pad, where it can be tested under cryogenic conditions, or inside the Vehicle Assembly Building, NASA said in an update.

While the rocket remained safe and it is too early to tell whether the bump in pressurization contributed to the cause of the leaky seal, engineers are examining the issue, the U.S. space agency said.

Because of the complex orbital mechanics involved in launching to the Moon, NASA would have had to launch Artemis I by September 6 as part of the current launch period.