Opinion: US gymnast Jade Carey made the right choice about her spot at the Tokyo Olympics

Whether she wins any medals at the Tokyo Olympics or not, Jade Carey will always know she did the right thing.

That’s more than international and U.S. gymnastics officials can say.

Carey confirmed Tuesday night that she plans to compete as an individual in Tokyo, ensuring the United States can send six women to the Olympics next month. Because her individual spot is nominative, meaning it is hers and hers alone, another American would have been left behind had Carey been part of the four-person U.S. team.

“I’m really excited to be heading to St. Louis next week,” Carey wrote in an Instagram post. “I have every intention to accept the individual spot that I worked very hard to earn by competing in the Apparatus World Cup Series spanning from 2018-2020 when officially offered to me.

THE TEAM: Simone Biles is a lock for U.S. Olympic gymnastics team. Who will join her?

“My focus right now is preparing to compete at the Olympic Games in Tokyo and being able to contribute to Team USA in any way possible,” she added. “Thank you for your continued support.”

Let this be a lesson to the International Gymnastics Federation, which insisted on going ahead with a foolish idea made even more ill-advised because of the COVID-19 pandemic. USA Gymnastics, too, which is so petrified of drawing any more criticism that it refused to take a definitive stance on Carey’s options, leaving athletes that the federation claims to care so much about to twist in the wind. 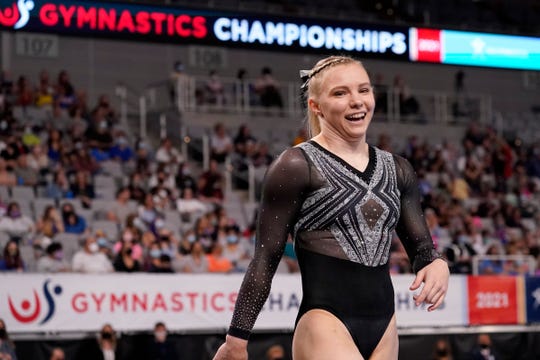