Pinterest’s evolution from mere inspiration to inspired shopping took another step forward on Monday with the arrival of a new Shopping List feature and an upcoming online pop-up-style event, along with the global expansion of shopping to more regions.

People have been able to save, or “pin,” products since the platform’s inception, but digging them back up has required users to hop from one Pinterest board to another to find them again. Shopping List automatically corrals all of those pinned items in one place to make them easier to look up or rediscover and, of course, purchase.

The feature takes important details, such as price, reviews and shipping, and organizes them into a grid to facilitate product comparisons and buying decisions. If prices drop on those products, users will also get notifications alerting them of the deal.

While the somewhat lofty notion of fostering inspiration has always been a north star for the platform, Shopping List looks like a more concerted effort to focus on the more practical facets of shopping.

As Dan Lurie, Pinterest’s global head of shopping products, explained to WWD, “Over the last few years, we’ve been working on making it easier, so that a Pinner can buy anything that they see on Pinterest or get personalized recommendations for something just like it….The way we view this is connecting the upper funnel inspiration that we are really strong at on Pinterest with that middle-of-funnel price discovery experience that starts to bring the user toward purchase.

“So Shopping List is a really natural extension, further down toward the end of the funnel, where we want to make it easy for users to retrieve the products that they saved,” he said.

The company has plenty of reason to help users reconnect with their objects of desire: According to internal data from May 2021, Pinterest users are more than seven times more likely to buy products they’ve saved.

Shopping List launches in the U.S. and the U.K. first, with Australia, Canada, France and Germany to follow later this year.

But Pinners in those regions won’t have to wait to dive into the platform’s other shopping tools. The company also revealed that it’s expanding its Verified Merchant Program and opening up profile shop tabs to those markets. Australia, Canada, France and Germany will also get the latest product tagging features.

Pinterest in addition took the wraps off a new, limited-time event called “The Goods by Pinterest.” Similar to a pop-up, the two-week shopping spotlight will give users in the U.S., U.K. and Canada a chance to see and pick up exclusive, limited-edition products from emerging brands such as Outdoor Voices and Olive & June in the U.S., Lucy and Yak and Charlotte Tilbury in the U.K. and Park and Fifth in Canada. 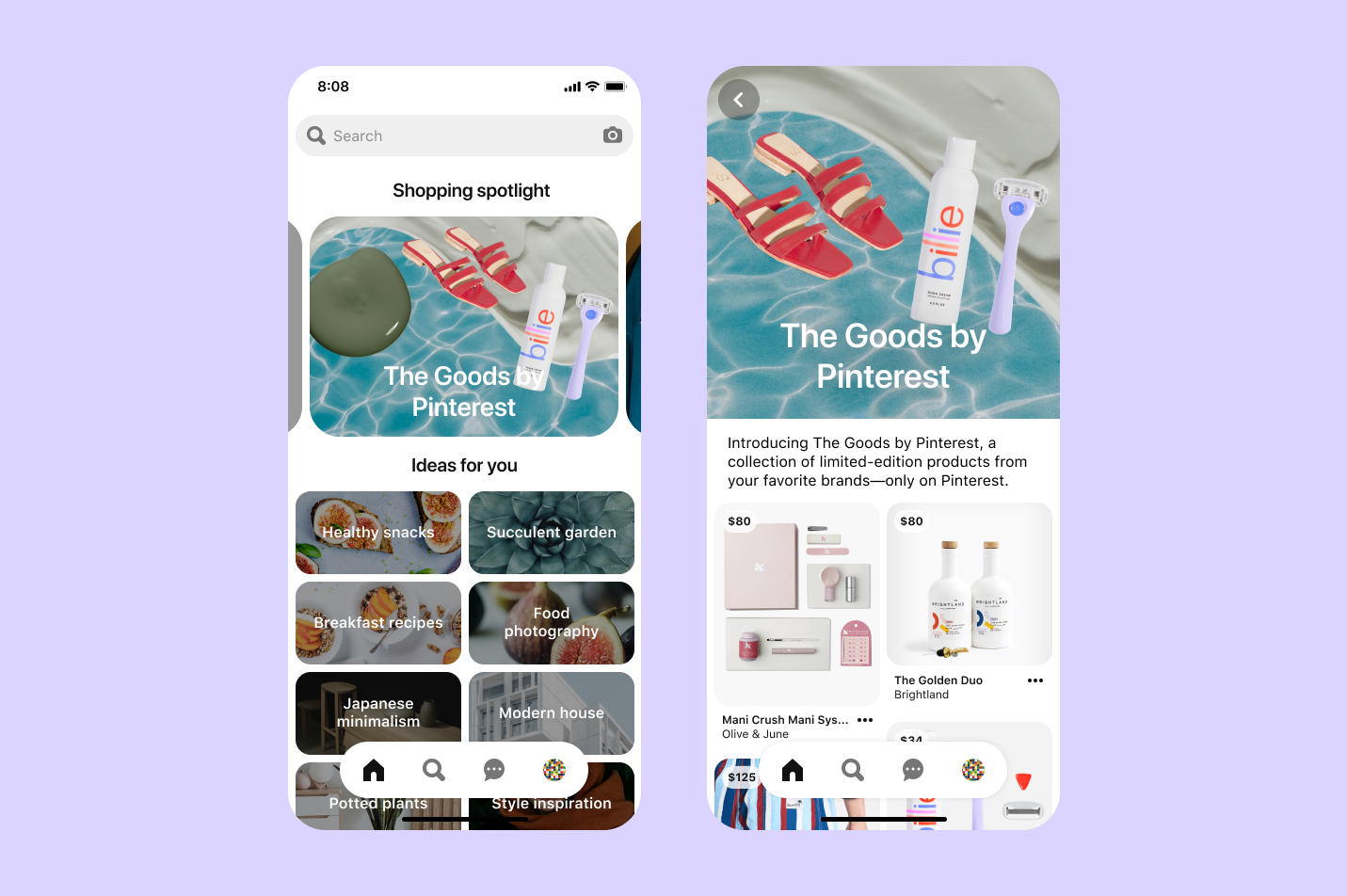 The Goods by Pinterest will feature limited-edition, exclusive products by emerging brands in the U.S., UK and Canada. Courtesy image

The universe of social commerce is undoubtedly expanding, and it’s clear that Pinterest is staking out its territory by focusing on the one thing that could set it apart: Discovery.

“A lot of pent-up usage is in a planning mind-set. People are coming here and looking and trying to figure out what they want their future to be, and then figure out the products that they need to make that a reality,” Lurie continued. “There’s also a part of usage on Pinterest that’s very much laid back. It’s almost like reading a magazine or a catalogue. And it’s just people who have a shopping mind-set, that’s locked into the digital mall, and they’re trying to get inspired by what’s out there. And so The Goods by Pinterest really fits into this vein of usage.”

In other words, Pinterest is taking the human inspiration that’s always been fundamental to its platform and applying it to shopping strategically as a commerce strategy.

“We really have evolved as a place of discovery, and specifically a place for personal discovery, which is quite visual on Pinterest. That process very naturally evolved to include products, because as Pinners are starting to visualize — you know, what do I want my home to look like? Or what do I want my wedding to look like? — products are a natural part of bringing that to life,” he said.

“But it is really a considered process, a slower process. So much of e-commerce is about trying to get you to convert immediately,” he added. “We’re definitely not trying to build that. We’re trying to help you find the right thing for your style, for your budget and for that vision that you’re trying to create.”

The strategy appears to be paying off. Pinterest said that over the past year, global consumers increasingly turned to the platform as an important shopping destination, with the number of users shopping there growing over 200 percent.

These shoppers are more valuable as well, according to an April Pinterest study conducted by Dynata. The report revealed that, on average, people on Pinterest spend twice as much as non-Pinners every month and have an 85 percent larger basket size.

So while human inspiration may be priceless, inspired shopping appears to be driving some concrete results.