Retail landlords fall into a new crisis at Christmas

A smattering of festive lights, a giant gingerbread house and big-name brands offering deep pre-Christmas discounts: the Gracechurch Centre in Sutton Coldfield is ready for retail’s most important time of year. All it needs now is more shoppers – and, ideally, more shops.

The 1970s-built scheme in the affluent town north-east of Birmingham has suffered an exodus of big names this year, with Marks & Spencer, Paperchase and Patisserie Valerie closing in the past few months and Argos set to shut for good on Christmas Eve. Next quit last year and the Observer counted at least a dozen vacant units during a visit last Thursday.

Gracechurch’s experience is not unique: centres all over the country have found themselves in the frontline of the retail crisis that has claimed 85,000 jobs this year and left thousands of stores lying empty. Last week the focus of the pain shifted from the shop floor to investors’ pockets as one of the UK’s biggest property funds placed a temporary ban on withdrawals. The £2.5bn M&G Property Portfolio – which owns Gracechurch – pulled down the shutters, admitting that it could not sell properties fast enough to repay the investors who wanted out.

M&G blamed the flight of investors on the uncertainty created by Brexit and “ongoing structural shifts in the UK retail sector”, adding that “deteriorating market conditions have significantly impacted our ability to sell commercial property”.

Bricks-and-mortar shops used to be a predictable home for investors and pension funds, thanks to the marriage of reliable rent-paying retailers and Britons who shopped until they dropped. But not these days. The rise of online shopping, combined with flaky consumer sentiment and rising costs such as business rates, are convulsing the retail sector, and no one knows when the pain will stop.

Suspending the property fund is designed to give M&G’s managers a window to rebuild its cash pile by selling assets in an “orderly manner” to “preserve value for our investors”, the company says.

Good luck with that, say property experts. Buyers – of shopping centres, at least – are as rare as hen’s teeth as owners sit tight and bargain-hunters scent blood in the water.

Dan Simms of the property advisory firm Colliers International says such assets are hard to price amid a stream of company voluntary arrangements – a form of insolvency being used by retailers to close stores – that are pulling down rents. “The problem is liquidity. The market doesn’t know how far rents are going to fall,” he says. “If you don’t know when it’s going to stop, the price people are willing to pay is constantly being discounted.”

The fact that the retail sector is going through a rough patch is not news to anyone. A succession of household names – from the department store chains House of Fraser and Debenhams to, most recently, the card retailer Clintons – have resorted to rescue deals to stay in business over the past two years. Others, such as Karen Millen and Coast, have shut up shop and moved online. So unloved is Marks & Spencer these days that it has dropped out of the FTSE 100. 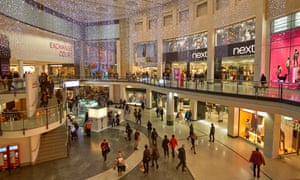 The quoted property companies have been hammered too. Intu Properties, the company behind Lakeside shopping centre in Essex and many others, has debts of £4.5bn and is headed for a cash call. Its shares have fallen by nearly 70% this year, and the group – which was the subject of an abortive £2.9bn takeover last year – is now worth less than £500m.

Nearly 40% of the M&G fund’s holdings are shopping centres and retail parks. Its biggest investments include Gracechurch, which it bought for £88m in 2013; Fremlin Walk in Maidstone, Kent, where struggling House of Fraser is the star attraction, which cost £110m in 2014; and the Bridgend Designer Outlet in Wales, which it snapped up for a similar amount in 2015.

When M&G announced the deal for Gracechurch, it was billed as a “good quality shopping centre” that had “proved resilient in tough market conditions”.

Today, regulars describe it as “depressing” as the big household names vacate. “The way they have let this go now, it’s a disgrace,” complains David Brunn, who has come to look around the shops with his wife, Linda. “Shops open for six months and then they shut again.”

“It’s terrible,” agrees Linda. “Since we lost M&S there’s nowhere to buy stuff. They need to spend money on it: all the shops are closing.”

While demand for warehousing to handle web orders has increased, the march of the internet has cast a deep shadow over the future worth of shopping centres and retail parks. Today, one in every five pounds of UK retail spending is online – double the figure for a decade ago. It is not all doom and gloom: tills are still ringing in some locations, especially the more upmarket centres. But the property industry’s view is that 30% of the UK’s 111m sq metres of shop space is redundant and needs to be repurposed as hotels and leisure destinations – or, particularly within the M25, as housing.

“The pressure to drive rents has disappeared,” says Simms. “If you take 20% of spend out of bricks and mortar over a 15-year period, that is a huge change. We don’t know where this will end at the moment. Nobody is confident enough to say we are through this period of turmoil.”

But while equity markets have slashed the value of bricks-and-mortar retailers and their listed landlords, the true value of direct property funds like M&G’s has not been tested, because no one has been selling amid the turmoil.

James Child, head of retail and industrial research at EG magazine, says the past six months have been the worst for deal-making on record: “UK shopping-centre investment has plummeted by more than 50% this year, compared with the same period in 2018.”

Less than £540m has been invested in shopping centre assets so far this year, which Child says looks set to be the lowest annual figure recorded since 2012. 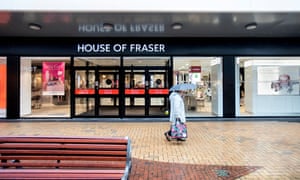 At the end of 2018, the asset manager Fidelity International warned that the value of UK shopping centres and retail parks could fall by 20-70% if prices were to catch up with retail’s grim new reality. The price crash would reflect the need for rents to be reset, with Fidelity suggesting cuts of 10-40% were the order of the day to make stores “sustainable and affordable” for bricks-and-mortar retailers.

Fidelity’s real estate investment director, Adrian Benedict, says values have fallen by about 10% this year but warns that rents are still “too high” and that would-be sellers will need to find courageous buyers willing to “catch a falling knife”.

“Over the past 12 months there has been a phoney war because nobody has really had to sell anything,” Benedict says. “We are now in a situation where we have a market participant where they need to sell and find a price. This could be the catalyst for the correction.”