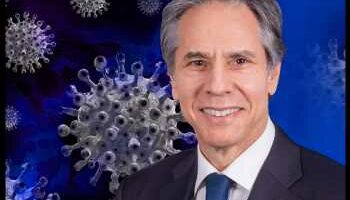 60 year-old Blinken is the second highest-ranking member in the Biden Cabinet to report being infected with the coronavirus.

Vice President Kamala Harris was diagnosed with the disease late last month, and returned to work at the White House Wednesday after she was tested negative.

Blinken, who was tested negative on Tuesday and again Wednesday morning, was tested positive in the afternoon via a PCR test.

The Secretary of State, who is fully vaccinated and boosted against the virus, is experiencing only mild symptoms, the department said in a statement.

Spokesman Ned Price said Blinken will isolate at home and maintain a virtual work schedule. “He looks forward to returning to the Department and resuming his full duties and travels as soon as possible,” he added.

Blinken was scheduled to deliver a long-awaited speech on China policy on Thursday.

Price made it clear that the Secretary has not seen President Biden in person for several days, and the President is not considered a close contact.

At a routine news briefing at the White House, Press Secretary Jen Psaki explained that “close contact,” as defined by the Centers for Disease Control and Prevention (CDC), is being within 6 feet for 15 minutes.

However, Blinken had a busy schedule so far this week at the State Department, and had engagements with a number of foreign dignitaries.

He met Swedish Foreign Minister Ann Linde and held discussions with her at the State Department on Wednesday.