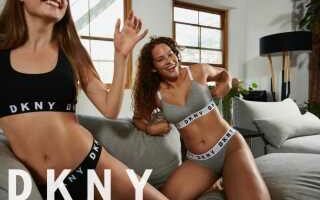 G-lll Apparel Group Ltd. is still showing signs of the coronavirus but Wall Street rallied around the manufacturer and retailer nonetheless.

The firm, parent to the DKNY and Donna Karan brands, among others, revealed quarterly and full-year earnings Thursday morning before the market opened, falling short on both top and bottom lines. But company shares shot up about three-and-a-half percent during pre-market hours thanks to improved sales expectations for the current quarter.

“Our entrepreneurial culture, with a merchant-led focus, proved to be invaluable as we responded to the casual trend by designing the right merchandise for our retail partners,” Morris Goldfarb, G-III’s chairman and chief executive officer, said in a statement. “We further elevated our position as a key supplier of choice for a broad range of apparel and accessories. We ended fiscal year 2021 with continued improvement in our wholesale operations and completed the restructuring of our retail operations.

“We enter fiscal year 2022 in a good inventory position, which is weighted toward casual product that remains in high demand,” the CEO continued. “As the year progresses, we believe there will be an increasing desire for dressier apparel and accessories. We are working closely with our retail and vendor partners to be in a position to bring these products to market in a timely manner. Our strong financial position and liquidity enables us to continue to fund our operations, as well as consider acquisitions.”

Total revenues for the company — which also includes Vilebrequin, Eliza J, Jessica Howard, Andrew Marc and Marc New York in the greater portfolio, in addition to fashion licenses under the Calvin Klein, Tommy Hilfiger, Karl Lagerfeld Paris, Kenneth Cole, Cole Haan, Guess, Vince Camuto, Levi’s and Dockers brands — fell to about $526 million during the three-month period ending Jan. 31, down from nearly $755 million the year before. That’s a 30 percent reduction. The company logged $14.6 million in profits during the quarter as a result, compared with $25.2 million a year earlier.

For the full year, revenues decreased 35 percent to just over $2 billion, compared with $3.16 billion a year earlier. Net income for the year was $23.5 million, down from nearly $144 million the prior year.

The company also incurred roughly $55.7 million in fees from permanently closing all of its Wilsons Leather and G.H. Bass stores (nearly 200) during the 2021 fiscal year.

G-III is not providing forward-looking guidance, but expects net sales for the current quarter to be around $460 million, compared with just over $405 million in the first quarter of fiscal year 2021.

In addition, Goldfarb has previously said he expects G-III’s jeans category to grow to a $250 million business and that the retailer could take advantage of current real estate vacancies caused by the pandemic to negotiate new leases or acquire property. The company has also previously said it expects to launch its Karl Lagerfeld Paris line in about 75 Macy’s stores this spring.

But some critics think the company’s dependency on department stores could prove to be a continued headwind.

“G-lll has solid brands, but a business model highly reliant on wholesale (88 percent of sales). Hence, it depends on third-party brick-and-mortar to reach consumers,” Jay Sole, an analyst at UBS, wrote in a note. “The company has a high exposure to a challenged department stores channel ([roughly] 45 percent of sales). G-lll is also downsizing its retail division as this remains unprofitable. Thus, it will reduce its ability to reach consumers by itself.”

The company ended the quarter with nearly $352 million in cash and cash equivalents and more than $512 million in long-term debt.