The all-electric Jeep Recon will be able to tackle rough off-road trails, the company says.

New York (CNN Business)Jeep will bring out three new all-electric SUVs over the next few years as it moves toward selling only electric vehicles in Europe by 2030 and having half its sales in the US be all-electric by then, too.

Executives for the off-road SUV brand also indicated that more fully electric SUVs will be revealed in the near future. Jeep currently offers two plug-in hybrid models in the US, the Wrangler 4xe and the Grand Cherokee 4xe. The Wrangler 4xe is, by far, the best-selling plug-in hybrid vehicle in America. In Europe, Jeep also has available plug-in hybrid versions of the Jeep Wrangler and Compass small SUVs.
With a history dating back to World War II, the SUV-only Jeep brand is now part of Stellantis, along with brands like Chrysler, Dodge, Fiat and Citroën. It has long been identified with off-road capability and outdoor recreation, and accordingly, that’s a big part of what it’s targeting with its first electric offerings. 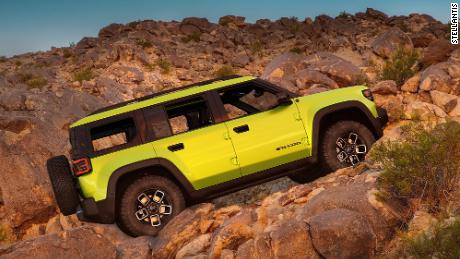 In North America, Jeep will offer the Recon, a Jeep Wrangler-like off-road vehicle, and much like the traditional Jeep Wrangler, it’ll come complete with removable doors and a large cloth sunroof that allows nearly the entire roof to be opened. The Recon will only be available as an electric vehicle, according to Jeep. It will have a storage area under the hood where the engine would ordinarily be in a gas-powered SUV. Full details on the vehicle will be provided sometime next year and it’s planned to go into production in 2024.

While it’s similar to the Wrangler, the Recon will not immediately replace that vehicle, said Christian Meunier, global head of the Jeep brand.

“The Wrangler stays the Wrangler,” he said, calling it “the icon of the brand.”
The new Jeep electric vehicles all have some version of Jeep’s famous “seven slot grille” even though electric vehicles don’t really need grilles. The design element points up the delicate balance between Jeep’s long heritage as a rugged off-road brand and the future demands for environmental sensitivity. 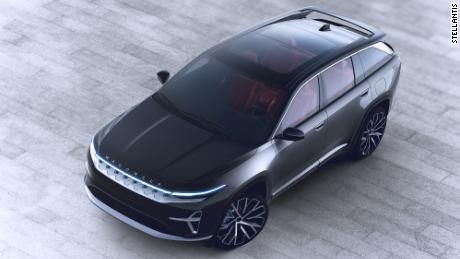 Jeep will also offer a new larger electric SUV the brand has code-named the Wagoneer S. This vehicle will have a “unique, sleek aerodynamic design and 4×4 capability as standard,” Jeep announced. The 600 horsepower SUV will be able to travel 400 miles on a charge and will able to go from zero to 60 miles an hour in 3.5 seconds, according to Jeep. It’s design incorporates a large rear wing over a sloping back end. 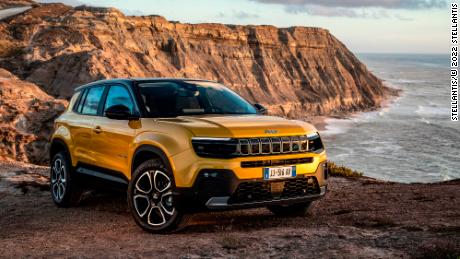 In Europe, Jeep will offer the Avenger, a compact electric SUV smaller than the current Jeep Renegade, the smallest model Jeep offers in the US. Jeep expects the Avenger to be able to drive as far as 400 kilometers, or nearly 249 miles, before needing to recharge. Jeep also promises impressive off-road maneuverability for a vehicle of its size. The Avenger will be unveiled at the Paris Motor Show in October, according to Jeep.
Source: Read Full Article