The Gospel of Hydrogen Power

In December, the California Fuel Cell Partnership tallied 8,890 electric cars and 48 electric buses running on hydrogen batteries, which are refillable in minutes at any of 42 stations there. On the East Coast, the number of people who own and drive a hydrogen electric car is somewhat lower. In fact, there’s just one. His name is Mike Strizki. He is so devoted to hydrogen fuel-cell energy that he drives a Toyota Mirai even though it requires him to refine hydrogen fuel in his yard himself.

“Yeah I love it,” Mr. Strizki said of his 2017 Mirai. “This car is powerful, there’s no shifting, plus I’m not carrying all of that weight of the batteries,” he said in a not-so-subtle swipe at the world’s most notable hydrogen naysayer, Elon Musk.

Mr. Strizki favors fuel-cell cars for the same reasons as most proponents. You can make fuel using water and solar power, as he does. The byproduct of making hydrogen is oxygen, and the byproduct of burning it is water. Hydrogen is among the most plentiful elements on earth, so you don’t have to go to adversarial countries or engage in environmentally destructive extraction to get it. The car is as quiet to drive as any other electric, it requires little maintenance and, because it doesn’t carry 1,200 pounds of batteries, has a performance edge.

His infatuation with hydrogen began with cars, but it didn’t end there. In 2006 he made the first house in the United States to be powered entirely by hydrogen produced on site using solar power. Nine years later he made the second. He says he has built hydrogen-power home systems for conservationists and celebrities — one of his systems reportedly powers Johnny Depp’s private island in the Bahamas.

Mr. Strizki is using his retirement to evangelize for the planet-saving advantages of hydrogen batteries. He has faced opposition from the electric, oil and battery industries, he said, as well as his sometimes supporter, the Energy Department. Then there is the ghost of the 1937 Hindenburg explosion, which hovers over all things hydrogen. The financial crash of the high-flying hydrogen truck manufacturer Nikola hasn’t advanced his case.

Like anyone with evangelical fervor, it can be easy to write him off as a kook. It doesn’t help that many of his achievements aren’t reliably documented — he said was not legally allowed to identify the celebrity homes he has electrified (news of the Depp island installation leaked out). Mr. Strizki concedes the point and dismisses it with a colorful version of “I don’t care what anyone thinks.” 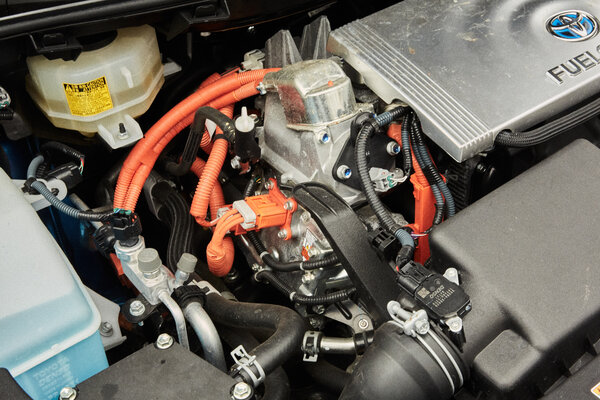 “Mike is sort of an eccentric guy,” said Tom Sullivan, the founder of Lumber Liquidators who invested in a Connecticut company that makes water-to-hydrogen converters. “I’m sure people thought Edison was a kook,” he said. “People need a few kooks.” Mr. Sullivan also deserves an asterisk as the owner of two East Coast Mirais that, he said, are “collecting dust” in Massachusetts.

Mr. Strizki’s expertise has made him a cult figure in hydrogen circles, where he has consulted on notable projects for two decades. He has worked on high school science projects as well as a new $150,000-ish hydrogen hypercar that claims to get 1,000 miles per fill-up.

“Oh, I know Mike Strizki very well, very well,” said Angelo Kafantaris, chief executive of Hyperion, the company that makes that Hypercar, the XP-1. Using a federal-standard dynamometer test, the XP-1, which claims a 0-to-60-m.p.h. time of 2.2 seconds and a top speed of 221 miles an hour, is said to achieve a range of 1,016 miles on a single tank. “I think Mike is an integral part of everything we do at Hyperion,” Mr. Kafantaris said.

Mr. Strizki, 64, wasn’t always a conservationist. He said he spent a decade drag racing at the Englishtown Raceway in New Jersey with a succession of cars, including a Shelby GT350 with a Boss 302 engine transplant. “The car was hot,” he said. “I didn’t see the ground for the first two gears.”

He discovered hydrogen power while working at the New Jersey Transportation Department’s Office of Research and Technology. Batteries that powered electric message signs didn’t hold a charge in severe cold. Mr. Strizki was tasked with finding a solution. He turned to hydrogen fuel cells like those NASA used in space.

When Cinnaminson High School in New Jersey entered an alternative-fuel vehicle contest, the 1999 Tour de Sol, Mr. Strizki was tapped to assist. “It changed my life,” he said. “As a racecar driver, it was always doing more with more — making more horsepower, burning more fuel. They taught me it was about doing more with less.”

Back at work, he proposed that a hydrogen car would be good publicity. “Anything that got good press for clean air was a priority,” Mr. Strizki said. A consortium of high schools, colleges and tech companies built a hydrogen Tour de Sol entry from a Geo Metro they called the New Jersey Venturer, which was succeeded by the New Jersey Genesis, built from a prototype aluminum Mercury Sable donated by Ford. “I never would have done fuel cell cars if I had not been at the Tour de Sol,” Mr. Strizki said. The last year of competition was 2006.

He left his state job for the private sector where he worked on Peugeot’s hydrogen concept car, a mini fire engine, and then a Chrysler hydrogen minivan called the Natrium, which was a modified Town & Country and went zero to 60 in a glacial 16 seconds. Although Mr. Strizki lacks Ivy League credentials — he attended a community college and then got a “life experience” master’s from an unaccredited online college — he is who the Ph.D.s often turn to for solutions, said Doanh Tran, an alternative-energy consultant who was a manager of fuel cell vehicles and technologies at DaimlerChrysler, and who has a Ph.D. “You can design almost anything on paper,” Mr. Tran said, “but to make it work is a whole different animal. You need the patience and creativity.”

Bringing hydrogen vehicles into wide use on the East Coast strained even Mr. Strizki’s talent for invention. On the West Coast, Arnold Schwarzenegger, the former California governor, who owned a hydrogen Hummer, cleared regulatory barriers with a pen stroke in 2004. The East has a series of bureaucracies to navigate. For instance, hydrogen is not authorized to travel via bridges and tunnels. “We wouldn’t want to put out a vehicle that you couldn’t drive into Manhattan,” said Gil Castillo, who tracks regulations at Hyundai Motor North America.

Further, Air Liquide, a gas manufacturer, quietly built five ready-to-go stations between Hempstead, N.Y., and Littleton, Mass., has to deal with state and city officials right down to the fire marshal, said David Edwards, director of the hydrogen team for Air Liquide in the United States. “Each locality has its own fire marshal.”

Progress is hampered by the impression that hydrogen is likely to explode, an idea cemented by the 1937 burning of the Hindenburg. More recently, hydrogen took a hit when Nikola, a hydrogen electric truck manufacturer and stock market darling, faced claims it had exaggerated its accomplishments. The accusation came from a short-selling firm by the name of Hindenburg Research. The Justice Department and Securities and Exchange Commission have issued subpoenas to Nikola.

“Hydrogen is in some ways safer than gasoline,” said JoAnn Milliken, director of the New Jersey Fuel Cell Coalition, a volunteer group, who knew Mr. Strizki from her time at the Energy Department. She cited a 2019 study from Sandia National Laboratories that found a hydrogen car to have no more fire hazard than a conventional vehicle.

Ever since Elon Musk called fuel cells “staggeringly dumb,” there has been a fierce rivalry between lithium-ion and hydrogen backers. Cooler heads see a place for each. Electric is suitable for people with a garage who travel limited distances and can charge overnight. But for long-haul trucks, hydrogen doesn’t add weight or reduce cargo space the way batteries do. Furthermore, hydrogen tanks can be refueled in minutes.

Mr. Strizki, who bought his car in California, chose from three options. The Toyota Mirai, Hyundai Nexo (then called the Tucson FCEV) and Honda Clarity. He chose the Mirai because the others were only for lease. “I wanted to own the car because I was going to screw with it,” he said. He declined elaboration except to say his car can now share its electrical power. “I have a drivable generator,” he said. “I have used my car to charge a Tesla.”

You wouldn’t know if you were driving next to a hydrogen car. Toyota, Hyundai and Honda each have had company demonstrator cars near the Air Liquide stations. But you would know if it was Mr. Strizki’s. On the side is an illustration of the motor and systems that lurk beneath the sheet metal. “People think it’s some kind of advertising, but it’s good; I can educate people,” he said, especially at car shows. “People are fascinated. They don’t believe this exists, then they say, ‘Why don’t we have this?’”