The Huaqiangbei shopping area in Shenzhen is home to the world's largest eletronics wholesale market.

Hong Kong (CNN Business)China’s southern city of Shenzhen on Monday shut down the world’s largest electronics market and suspended public transport nearby as authorities enforced neighborhood-wide lockdowns in response to a small number of Covid cases.

Huaqiangbei, a busy shopping area home to thousands of stalls selling computer components, mobile phone parts and microchips, is among three neighborhoods placed under a mandatory four-day lockdown in Futian district, according the district government.
Residents in those neighborhoods are forbidden to leave their homes except for Covid testing, which they are required to undergo daily until Thursday.

All businesses in the affected areas are shut down through Thursday, except for supermarkets, pharmacies and hospitals. Restaurant dining is also suspended, with only takeaways allowed.

China is one of the last places in the world still enforcing stringent zero-Covid measures, which rely on sweeping digital surveillance, mass testing, extensive quarantines and snap lockdowns.

The districts of Luohu and Longgang also shut down all entertainment venues and public parks, and banned gatherings from conferences and performances to square dancing.
Authorities also suspended service at 24 subway stations and hundreds of bus stations across Shenzhen, including around the Huaqiangbei electronics market.
At a news conference Monday, Shenzhen officials said the outbreak is mainly driven by new subvariant Omicron BF.15, which they said is more transmittable and harder to detect.
“The upcoming period will be the most stressful, high-risk and grim period for epidemic prevention and control in our city,” a Shenzhen official told the news conference. 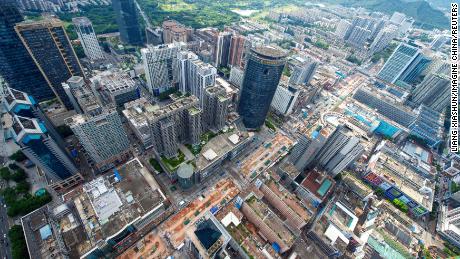 China’s zero-Covid strategy has faced growing challenges from the highly infectious Omicron variant, with large swathes of the country subject to rolling lockdowns and daily testing.
The unending restrictions have upended daily life and dealt a heavy blow to the slowing economy. In July, youth unemployment in China hit a record high, with one in five young people out of work. 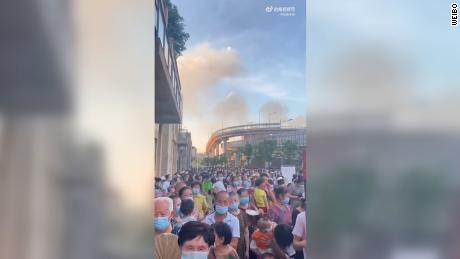 Earlier this month, Covid outbreaks in the resort island of Hainan and the western regions of Xinjiang and Tibet trapped tens of thousands of tourists.
In the southwestern metropolis of Chongqing, authorities ordered mass Covid testing during a record heat wave, leaving millions of residents standing under the sun for hours as they struggled with extreme temperatures and power shortages.
And this week, the neighboring province of Sichuan reported a resurgence of the virus. Chengdu, the provincial capital of 20 million people, identified 205 infections Tuesday, after authorities rolled out mass testing across the city. The outbreak, first reported last Thursday, was linked to a swimming pool, according to authorities.
Amid fears of a prolonged citywide lockdown, Chengdu residents rushed to snap up groceries and daily necessities at supermarkets.

In Shijiazhuang, the capital of Hebei province in northern China, authorities suspended public transport across the city over the weekend, after 30 infections were found during mass testing. The city is home to 11 million people.
In the northern port city of Tianjin, 20 infections were reported after citywide testing on Friday.
Source: Read Full Article