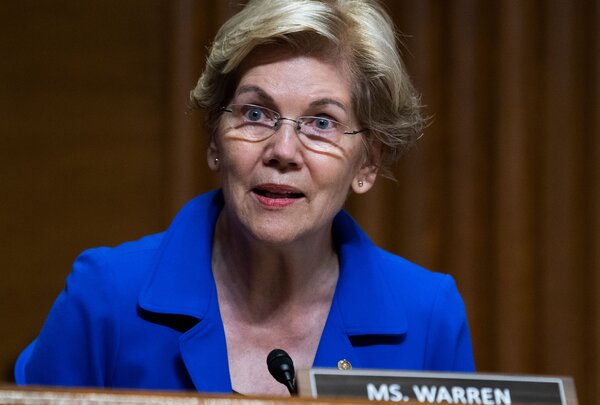 Sounding the alarm over crypto banks

Cryptocurrency is transforming the way people save and borrow money, and a slew of new businesses are popping up to provide services that resemble bank offerings. But this fast-growing crypto-finance sector has officials in Washington worried, The Times’s Eric Lipton and DealBook’s Ephrat Livni report.

“Crypto is the new shadow bank,” Senator Elizabeth Warren, Democrat of Massachusetts, said in an interview. “It provides many of the same services, but without the consumer protections or financial stability that back up the traditional system.”

Customers with crypto holdings can earn much higher interest rates than at traditional banks, and they can borrow money, using crypto as collateral, often with no credit checks. The high rewards come with potential dangers as deposits aren’t federally insured and networks can be vulnerable to hacks and fraud, Warren said.

The market is expanding quickly — in all sorts of directions. There are businesses with similar models to traditional consumer-oriented banks, like BlockFi. It’s centralized and transacts with more than 450,000 customers in cryptocurrency, offering loans based on crypto collateral as well as interest-bearing accounts. More radical is the world of decentralized finance, or DeFi, where markets are controlled by computer code and devised to be governed by users.

Compound, for instance, which began in 2018, is a decentralized, automated lending and borrowing system that’s backed by Andreessen Horowitz and Coinbase. In its early days, Compound’s founder, Robert Leshner, said, “I woke up in a cold sweat every morning.” His nightmare was that somebody would find a flaw in the code, attack the protocol and steal everything. This fear has receded as the program has proved itself, with nearly 300,000 anonymous “customers” and more than $20 billion in assets earning interest. “At every juncture,” he said, “the speed at which decentralized finances has just, like, started to work has caught myself and everybody off guard.”

Traditional banks are torn, and regulators are scrambling to catch up. Through their trade associations in Washington, banks are pressing lawmakers and regulators to rein in crypto competitors, and officials are considering new rules. At the same time, banks are venturing into crypto and doing business with blockchain finance start-ups because it’s clear there is a lot of money to be made.

Warren said that the big banks were partly to blame for their new competitors’ success because traditional institutions had been elitist, excluding consumers seeking credit and offering minimal returns to depositors. Still, she said, “jumping from the regulated banking industry into a shadowy, deregulated system is like jumping from the frying pan into the fire.”

Don’t know DeFi from Ethereum? Stablecoins from CBDCs? Check out this handy explainer about what’s happening in the crypto finance industry along with a glossary of key terms.

Elizabeth Holmes’s long-anticipated trial begins. Opening statements in the trial of the Theranos founder are set to get underway today, with prosecutors expected to tell the jury that Holmes knowingly defrauded investors and customers of the blood-testing start-up. Meanwhile, court records involving Holmes’s partner, William “Billy” Evans, revealed that the couple were living in a home on the grounds of Green Gables, a 74-acre property in Silicon Valley that is one of America’s most expensive estates.

Australia sets up another fight over Facebook and news. The country’s highest court ruled today that media outlets were liable for comments posted by third parties on their Facebook pages. The ruling opens the way for news organizations to be sued as “publishers” of allegedly defamatory comments.

Inflation surges from Sydney to San Francisco. The price gains have ramped up pressure on the Fed and other central banks to dial back stimulus efforts even though many nations are not yet fully recovered. In Europe, soaring gas prices are creating increasing drag as economies there struggle to recover from the pandemic.

President Biden calls “code red” on climate change. Visiting some of the areas battered by Hurricane Ida, Biden said that the U.S. and the world were “in peril” from climate change, and that drastic action would be needed to limit further global warming. Yesterday, the White House sent Congress an urgent funding request for $14 billion to aid recovery from natural disasters that occurred before Ida, adding that billions more would be necessary to respond to the damage incurred by that storm.

Apple’s carmaker ambitions are in jeopardy. The future of the company’s secretive autonomous electric car project is in doubt after Doug Field, the vice president for special projects at Apple, left to become Ford’s chief advanced technology and embedded systems officer. Separately, the latest iPhone is expected to be unveiled next week at Apple’s “California Streaming” online event on Sept. 14.

El Salvador’s adoption of Bitcoin as an official currency, a global first, got off to a rocky start yesterday. President Nayib Bukele has promoted his plan to adopt Bitcoin as legal tender alongside the U.S. dollar as a way to attract foreign investment and foster financial inclusion for the unbanked. But many Salvadorans are critical of Bitcoin, and questions remain as to how practical the volatile currency will be for daily transactions.

Technical glitches slowed the rollout. The government’s app to facilitate transactions, called the Chivo digital wallet after a slang word for “cool,” was temporarily taken offline on Tuesday morning. And about 1,200 Salvadorans took to the streets of the capital, San Salvador, to protest the hasty adoption of the Bitcoin law. The law was announced in June to Bitcoin fans in Miami, and was adopted quickly thereafter with minimal public debate. A recent poll showed that most Salvadorans don’t plan to use cryptocurrency.

Bitcoin showed its true character. The cryptocurrency’s price rose above $52,000 on Monday ahead of what Mr. Bukele and others were calling “Bitcoin Day,” but the difficulties on Tuesday reversed those gains. As the rollout slowed, the price fell to around $45,000. Economists have warned that volatility like this makes adopting the cryptocurrency a risk for El Salvador’s fragile economy. The World Bank and International Monetary Fund, which is considering a financing deal with El Salvador, have also said that making Bitcoin an official currency leaves a country open to money laundering and other illicit financial activity.

In other crypto news:

Brian Armstrong, Coinbase’s C.E.O., called out what he said was “sketchy behavior” by the S.E.C. His thread on Twitter followed the regulator’s threatened legal action over his company’s planned launch of Lend, a product that would allow consumers to earn interest on their crypto holdings. (Twitter, Bloomberg)

The N.B.A. star Steph Curry has signed on as an ambassador for the crypto exchange FTX, joining the N.F.L.’s Tom Brady. (The Block Crypto)

“I know their names and that’s about it.”

— Kathryn Gregorio, who joined a nonprofit foundation last year and quit before ever meeting most of her colleagues in person. As the pandemic drags on, more workers are finding themselves in a similar situation, leading to an easy-come, easy-go attitude toward their jobs. <<keep this as an H2 for NL

A hedge fund takes on the railroad barons

Canadian National’s bid to buy Kansas City Southern and create a rail network that stretches across North America is facing a new challenge. This week, the longtime railroad investor TCI Fund Management started a proxy battle to oust the railroad company’s C.E.O., Jean-Jacques Ruest. TCI wants Canadian National to stop pursuing the acquisition and overhaul its board. “We believe CN’s best days are ahead of it, provided the company immediately withdraws from its reckless, irresponsible, and value destructive pursuit of KCS,” the fund’s founder, Chris Hohn, said.

Canadian National’s bid “exposed a basic misunderstanding of the industry and the regulatory environment,” TCI argues. The fight for Kansas City Southern is the first real test of guidelines put in place in 2001 to tighten scrutiny in deals that involve the largest railroads. The vote wasn’t even close: The Surface Transportation Board went against the trust 5 to 0.

The best places to work (remotely)

Quartz this morning published its first ranking of the best companies for remote workers, a new focus for executives as the pandemic forces more companies to rethink operations.

Software companies dominate the rankings. The top spot in all three of Quartz’s categories — small, medium and large companies with at least a quarter of employees working remotely — went to software companies, all of which, despite the categories, are relatively small businesses.

Flatfile is a database software company with 31 employees.

Workato, an enterprise software company that is the biggest of the winners, has 320 employees, and is officially based in Mountain View, Calif.

Factors like pay, leadership and benefits were considered. Quartz asked employees questions about issues that matter to remote workers, like whether a company offers stipends or equipment for a home office. The winners included both companies “that have been at this for a while” as well as those “relatively new to remote work and figured out very quickly how to make it work for people,” said Quartz’s executive editor, Heather Landy.

The Roger Federer-backed sneaker company On files for an I.P.O. (NYP)

BlackRock raised about $1 billion in the first foreign-owned mutual fund approved to be sold to Chinese individuals. (WSJ)

Facebook-owned WhatsApp’s assurances that no one can read or listen to users’ messages are not exactly true. (ProPublica)

The Dallas Fed President Robert Kaplan made multiple stock trades valued over $1 million last year, according to a financial disclosure form provided by his bank. (WSJ)

After the Greensill and Archegos scandals, Credit Suisse has appointed a new chief compliance officer. (FT)

Pfizer’s top scientist dismissed suggestions it was pressing policymakers to roll out booster shots, saying being proactive was the right thing to do. (FT)

A flurry of litigation by advocacy groups is taking on what they say is a rise in deceptive marketing by food giants. (NYT)

A search for low-carbon fuels is heating up a fight over vegetable oil. (FT)

“My Colleague Is Secretly Holding Two Jobs. Should I Expose Her?” (NYT)

What would you like to know about kids and Covid-19? Join Andrew and other Times journalists as they speak to Dr. Anthony Fauci, the director of the National Institute of Allergy and Infectious Diseases, and try to answer your questions about the coronavirus’s effect on children. This exclusive virtual event for Times subscribers is tomorrow at 1 p.m. Eastern. R.S.V.P. here to attend.