The Wedding Business Is Booming, a Short-Term Jolt to the Economy

Meg Van Dyke, who runs a Pittsburgh wedding planning company, spent a recent weeknight frantically calling photographers for a May 2022 wedding. All eight who fit her couple’s criteria were fully booked.

“I’ve never had a problem finding vendors before,” she said. “It’s absolutely booming.”

Weddings are roaring back after a pandemic-induced slump, leading to booked-up venues, a dearth of photographers and rising prices on catered dinners. As demand picks up, it’s providing an additional jolt of spending to the U.S. economy.

The race to the aisle is payback after a lost year of ceremonies. As lockdowns swept the nation, weddings slowed abruptly at the onset of the pandemic. Shane McMurray, founder of The Wedding Report, estimates that 1.3 million marriages took place in the United States last year, compared with the typical 2.1 million. Those were often “micro-weddings,” according to industry insiders, with just a handful of guests, if any were present at all.

That’s turning around sharply. Weddings have not quite returned to normal for 2021, but they are quickly rebounding, and Mr. McMurray forecasts that next year they will jump to the highest level since the 1980s as engaged couples who have waited out a global pandemic finally tie the knot.

Weddings Are Picking Up After a Pandemic Slump

They are expected to jump sharply in 2022, to levels last seen nearly 40 years ago.

By The New York Times

Once that pent-up demand plays out, he expects that long-running trends like cohabitation without marriage will come to dominate.

Many economists agree. “My instinct, immediately, is: This is not a marriage boom; this is a wedding boom,” said Jessamyn Schaller, an economist at Claremont McKenna College. She added that even with the short-term pop, there were likely to be fewer marriages than there would have been had the pandemic never happened.

In other words, the wedding boom is probably a blip.

Marriage rates have been dropping for decades, and hit a record low of 6.1 per 1,000 people in 2019, down from 8.2 in 2000. The decline has come alongside a drop in fertility, which also hit a new low before the onset of the coronavirus.

What the wedding rebound could do is lay the groundwork for a brief post-pandemic baby bump, since couples often wait to exchange vows before they have children.

Lyman Stone, a research fellow at the Institute for Family Studies, tracks fertility intentions in surveys and keeps a close eye on state-level birth data. A baby bust that took hold after the pandemic started already appears to be turning around, much faster than expected.

“It is a rapid return to normal,” Mr. Stone said. The nascent wedding rush “probably means that we have a couple of years here where we have somewhat more positive fertility than was previously expected.” 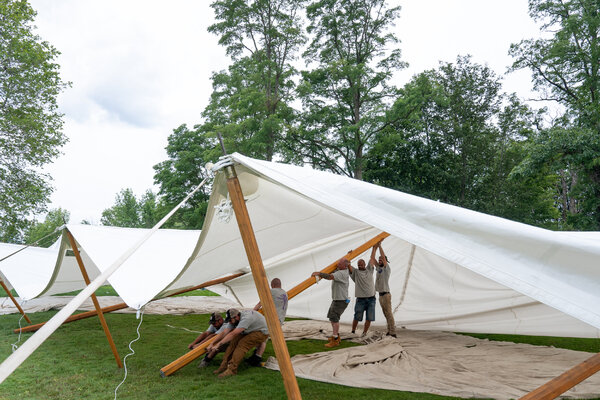 Lest onlookers get too excited, Mr. Stone points out that what was expected was a slow decline in births..

And Melissa Kearney, an economist at the University of Maryland, cautioned that the early signs of a fertility rebound playing out now could be a false signal, since the pandemic is still playing out and it will take time to see how birth trends shape up.

But Adam Ozimek, chief economist at the freelance job site Upwork, thinks that many economists might be taking too dim of a view of the pandemic’s ability to put America on a different social trajectory. He hasn’t penciled in a big increase in marriage, but he does think that younger adults may change their ways in the wake of the crisis.

People have saved a lot of money during the pandemic, thanks to long months at home, a rising stock market and repeated checks from the government. Remote work and the shift toward more work from home have introduced new geographic flexibility for many young adults.

Millennials who had been delaying home buying, for instance, may now have an opening.

“That’s a pretty good recipe for stronger household formation,” Mr. Ozimek said, referring to what happens when adults move out on their own or in with partners rather than parents or, in some cases, roommates. “You can afford to buy your own house, start your own family.”

If that was to play out on any substantial scale, it would have big implications for the economy. Millennials are the nation’s largest generation. Any change in homeownership, marriage or fertility rates among this group would fuel spending on everything from outdoor grills and washing machines to day care.

But it will take years to see whether the pandemic marked some sort of turning point for American family life.

What is clear now is that it pushed back ceremonies, making for a short-term spending boost on cakes, china, dresses, hair, makeup and photographers — a source of bottlenecks, but also a welcome recovery for some vendors who saw business drop precipitously amid lockdowns.

Ms. Van Dyke in Pittsburgh said brides with their hearts set on prized venues — like the downtown Omni William Penn Hotel — are setting their ceremony dates in 2023 as they compete for dates.

In Washington, D.C., the sweet shop Baked & Wired went from selling tiny six-inch cakes during the pandemic to receiving more orders than it can accept for Razmanian Devil wedding cakes: tiered layers of lemon cake filled with raspberry jam and topped with buttercream.

“It’s Tuesday, and they’re like, ‘Hey, can I get a wedding cake for Saturday?’” said Teresa Velazquez, the shop’s owner. “We’ve waited this long — let’s throw it together and get married.”

Marvin Alexander, a makeup artist in New York City who decided to shift from the fashion industry to bridal during the depths of the pandemic, is also seeing lots of last-minute bookings, including from rescheduled weddings. The events are often more modest affairs, with smaller wedding parties and guest lists, in a nod to virus risks.

“I’m starting to see a few people being more comfortable about 2022, even with the Delta variant strong on our heels,” Mr. Alexander said.

On the other end of the spectrum, Magdalena Mieczkowska, a wedding planner, has seen demand in the Hudson Valley and Berkshires take off for big events in 2022. And clients are willing to spend: Her average was typically $100,000 per event, but now she's seeing some weekends come in at $200,000 or more.

“People were postponing, and now they have more savings,” she said. Plus, vendors are charging more for catered meals and cutlery rentals. “Everyone is trying to make up for their financial losses from the 2020 season.”

Wedding industry experts said they expected demand to remain robust into 2023 before tapering back to normal, as new bookings vie for resources with delayed weddings like the one Ariana Papier, 31, and Andrew Jenzer, 32, held last weekend in Richmond, Mass., a town in the Berkshires.

The couple had to cancel their original June 6, 2020, date, opting to elope instead, but rescheduled the event to Aug. 7, complete with signature cocktails (a bush berry paloma and an Earl Grey blueberry old-fashioned), a dance floor and s’mores.

“We’re calling it a vow renewal and celebration,” Ms. Papier said just ahead of the ceremony, adding it was the couple’s third attempted venue, thanks to pandemic hiccups.