This company is building 3-D printed, small homes on existing residential properties to fight back against California's housing shortage. Look inside a unit that was move-in ready in one week.

While the world of real estate has spent the last half-a-year theorizing about the future of the office, or how in-person retail could survive a pandemic that taught grandparents how to order groceries online, one thing has stayed constant – America has a housing shortage.

A California-based startup, Mighty Buildings, is 3D-printing homes with novel materials to speed up the home building process and help housing supply catch up to demand.

They're well-placed to make an impact as the housing shortage is particularly acute in rapidly growing California, which needs an additional 3.5 million homes by 2025, according to a 2016 McKinsey report. The number of houses that are being constructed has already been far below the number needed to meet that goal, and the pandemic has only slowed the progress. A 2019 report found that the state needs to build 1.4 million homes just to make up its shortfall in affordable rental units.

The pandemic may have shuffled the decks, with San Francisco rents dropping precipitously as some techies look to remote work, but the underlying problem hasn't been solved. The problem is multifaceted and developers, tenant activists, and everyone in between has their own visions for solving the crisis, but new zoning laws and forms of construction have offered at least one path forward.

Read more: Construction firms that get tech right could see Silicon Valley-like valuations. Here's how an old-school industry can transform itself.

Earlier this year, it became legal to build Accessory Dwelling Units (ADU), essentially the legal term for in-law units or small buildings built for residential use on a residential property, in any area that allows residential units. In practice, this makes it now possible to build small units on any residential property in the state and either rent them out or use to house extended family.

Mighty Buildings is using the new ADU law to show off its 3D-printed technology that can print a structure in a day. The Oakland-based startup has raised at least $33 million in total according to forms submitted to the Securities and Exchange Commission, including a $20 million August 2019 Series A led by Silicon Valley-heavyweights Khosla Ventures.

The company prints its homes with Light Stone, a material that sets into shape when it's hit by UV light, saving the hassle and wait related to building with concrete and other materials that take days to harden. This also makes it possible to 3D-print a roof, something that is impossible with other building materials. The company's plan is to prove its concept with ADUs, while developing the capacity to eventually print larger, multi-story structures.

"ADUs are just the start, it's a niche market to prove the concept and show viability," Sam Ruben, chief sustainability and partnerships officer and cofounder of Mighty Buildings, told Business Insider.

The company sells direct to consumers, with the smallest model costing $115,000, but is also exploring partnerships as a way to scale their business. Ruben told Business Insider that partnerships will be crucial to allow the startup to build as many homes as possible, putting a dent into the state's housing deficit.

In September, the company announced a partnership with LA-based developer the Palari Group, building ADUs on sites where Palari is building multifamily properties.

The earliest properties that Mighty Buildings have built are only partially 3D-printed, a side effect of building with a novel material and technique. Ruben said that the company is planning to eventually 3D-print entire homes, but will first use panelized construction. Panelization is a technique where portions of a home are fabricated offsite, and then quickly assembled together on site.

Ruben walked us through a virtual tour of the first small home that the company built for a customer, located in San Ramon, California.

This home, in a backyard in San Roman, was created to be a guest room and pool house for the family who lived there. 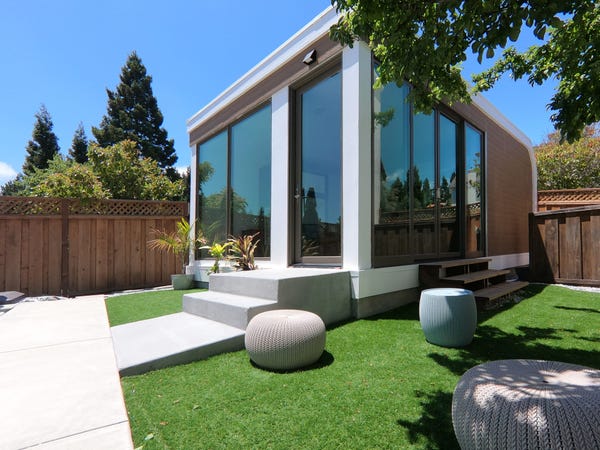 The building is a studio and is the smallest size that Mighty Buildings makes, at 350 square feet.

Half of the home is wrapped in windows, which Ruben says was done to help make the building feel much bigger than it actually is.

In other small homes, the company has added curtains for privacy, but because this building is used as a guest house and pool house, the owners have decided not to use it.

The building was designed and styled to match the owner's stucco and tile home. 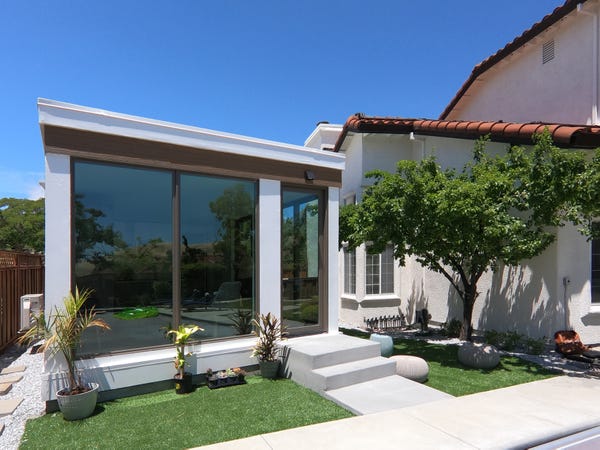 While the materials are not the same, the company tried to match the quintessentially Californian decor of the home that the building is nestled next to.

The home overlooks the client's pool, and sits a few feet away from the edge of their home. It has a door on the front, as well as sliding glass doors on the side of the building that faces the home.

The rounded back of the building is the only solely 3D-printed part of the home.

While the company can feasibly build homes entirely from Light Stone in the 3D-printer, they're waiting for certification of the building technique before actually doing it in someone's home.

They're also developing a fiber-reinforced material that should allow them to print multi-story apartment buildings without the use of framing or other supports.

The unit was built mostly offsite, and then a crane placed the unit in the owner's backyard. Ruben says installation took only a day, and that within a week, the building was fully complete. The main delay, Ruben said, was coordinating with electricians and plumbers to finish the installation on site.

The company's next step, before fully 3D-printed homes, is to use panelized construction that gets rid of the need for a steel frame. Panelization should allow Mighty Buildings to build faster and with less labor than conventional framing techniques.

This is the main living space in the unit. 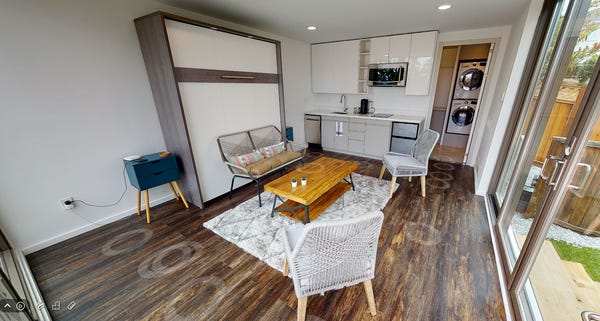 The space is made up of a main living area, a kitchen against the back wall, and a bathroom in the back, nestled into the wholly 3D-printed part of the home.

The studio space uses a Murphy bed to maximize space. 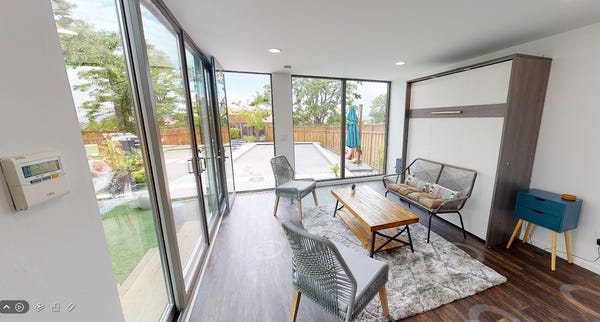 The Murphy bed is a large space saver, allowing the room to do double duty as a hang-out space and as guest's quarters.

The home's thermostat is also visible in this photo. It connects to a small HVAC unit on the outside of the house.

The home is very energy efficient, combining the insulated properties of Light Stone with foam insulation that is sprayed in the hollow parts of the printed structure.

The kitchen is small but boasts features like pull-down cabinets and an induction stovetop. 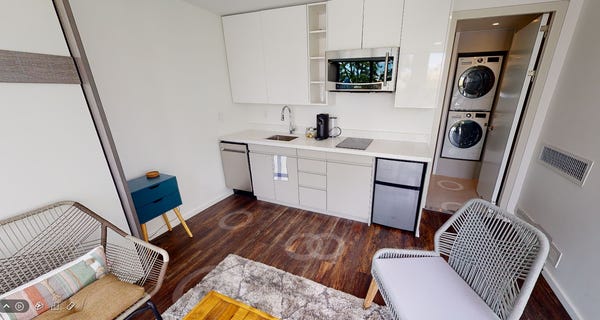 This compact kitchen was built with its purpose as a pool house or guest house in mind, which is part of why it is so compact.

The owners decided to use a mini-fridge instead of a full-size fridge to save space, but Ruben said that they can build with a full-sized fridge as well.

There are a number of space-saving features that do double duty, with an induction stovetop that can be used as additional counter space when it isn't turned on, to a combination microwave/conduction up top. Still, they didn't skimp on appliances, adding a dishwasher as well.

Another space-saver was cribbed from ship construction, pulldown cabinets. The home has high ceilings and storage is tight, so the cabinets were built up quite high. Once they're opened, the shelving on the inside can actually be pulled down, making them accessible to anyone using the kitchen.

The spacious bathroom includes a washer-dryer unit, as well as ample space to do laundry.

The company uses pre-built bathroom pods in their units, and Ruben says it only took about two hours to set up the electrical and plumbing for the pod.

While the studio is small, the bathroom is uncramped even though it includes laundry space and full washer dryers.

"We wanted to offer the full amenities of an apartment in a small space, and it tucks in really, really nicely," Ruben said.

The bathroom uses high-quality finishes and is able to fit a large shower into a small space. 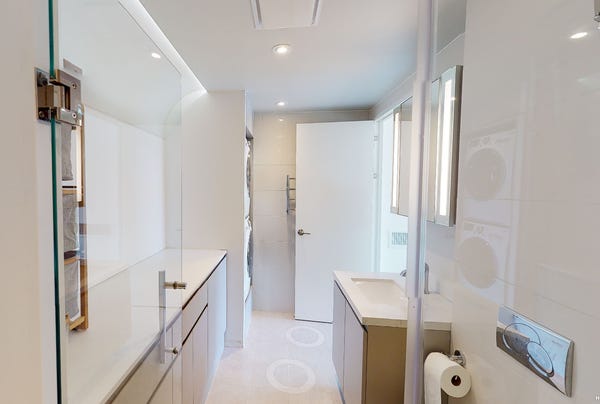 The shower is large enough to include a bench, providing accessibility to the home for elderly and disabled people. The toilet is a smaller model and is dual-flush, an important feature in drought and fire-prone California.

The vanity has a built-in-light, bringing a touch of luxury to the bathroom.