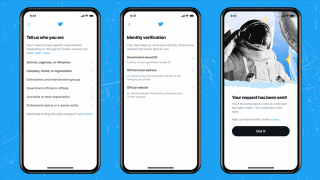 Social currency in the real world often comes down to what people do for a living. On Twitter, it’s the elusive blue “verified” badge. The problem is that the process to get one has never been clear.

That’s because there was no standardized process, at least not that users could participate in. But that’s about to change.

On Thursday, the tech company unveiled a new verification application process, shedding light on the criteria required to obtain one of these little status symbols.

According to its blog, “Today’s application rollout marks the next milestone in our plans to give more transparency, credibility and clarity to verification on Twitter.”

Successful applicants, it explained, are notable figures in government, companies or brands, media, entertainment, sports and gaming and other areas, like activism. It’s also pondering more categories that could extend eligibility to scientists, academics and religious leaders, among others.

The platform has visually marked the accounts of celebrities, politicians, high-profile business and tech executives, journalists and other public personalities for years, but its requirements have never been laid out this explicitly. This has been a gray area since the company introduced them 12 years ago, leading plenty of people to try and fail to nab those status symbols.

As fashion knows, there’s nothing like scarcity to drive demand. But in this case, the opacity of Twitter’s decision-making process has triggered years of rumination, debate, even criticism. That’s a lot of energy over a symbol whose significance isn’t even all that clear to people. After all, there are no premium features that come with the badge or any other perks.

Twitter wants to set the record straight about what the check mark means, once and for all: “The blue badge is one of the ways we help people distinguish the authenticity of accounts that are of high public interest,” it wrote. “It gives people on Twitter more context about who they’re having conversations with so they can determine if it’s trustworthy, which our research has shown leads to healthier, more informed conversations.”

Beyond just being famous or influential, the applicant must have a complete account — with a profile name, image and a confirmed email address or phone number — and have been active within the last six months, with a clean record of adherence to Twitter’s rules.

A software update will roll out starting Thursday and continue over the following weeks. Once users have the update, they will be able to apply directly in the mobile app.

People who care about verification — and, it turns out, some people deeply do — can follow the @Verified for updates to the process.