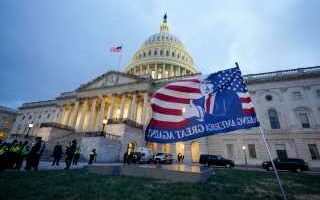 Twitter for the first time took the step of temporarily suspending Donald Trump from the platform after the outgoing president spent the day tweeting in support of a pro-Trump mob that stormed the U.S. Capitol building.

The social media platform started by flagging most of Trump’s tweets from the day, which included a range of false claims about the election of incoming president Joe Biden and what were widely seen as a call for his supporters to act on his false claims that the election was somehow unfair or “rigged.”

Then, in the evening, after Washington, D.C., was forced to go on lockdown and institute a 6 p.m. curfew due to the actions of Trump supporters, Twitter took the step to block from public view several tweets the President made during the day, saying they violated safety rules and citing the “ongoing violent situation in Washington D.C.” It clarified that Trump’s account will be “locked” for at least 12 hours, meaning he cannot use the platform and the public cannot see his flagged tweets.

“If the tweets are not removed, the account will remain locked,” the company said. This is the first time the platform has suspended Trump’s account, or that of any U.S. president.

The platform also removed a video Trump posted of him speaking to his supporters and telling them, in part, “I know your pain. I know your hurt. But you have to go home now. We love you. You’re very special.”  However, the video had been viewed at least 10 million times before that action was taken. Facebook also removed the video from its platform, but it had already been viewed at least 5 million times.

In another unprecedented step for Twitter, the company said that should Trump again violate its rules on “civic integrity” or “violent threats,” it “will result in permanent suspension” of his account.

“We’ll continue to evaluate the situation in real time, including examining activity on the ground and statements made off Twitter,” the company added.

The threat of suspension from Twitter, which has been Trump’s only consistent mode of communication with the public for years, came after a day of surreal scenes from D.C.

Thousands of pro-Trump extremists showed up Wednesday in the U.S. capitol to protest the certification of the Electoral College vote, which formalizes Biden’s November win of the U.S. presidency. They proceeded to bombard the Capitol Building, breaking through barricades, windows and doors, many waving pro-Trump and Confederate flags, forcing scores of politicians present for the certification to hide in their offices as the building went on lockdown. They were eventually moved by security into another room within the building in an effort to stay away from those that broke into the building and then evacuated. Other state capitols were also subject to crowds of Trump supporters acting out on false claims around the election, including Georgia, where Democrats just gained two Senate seats, California and Kansas, but none were as violent as D.C.

After several hours of pro-Trump supporters being illegally inside the Capitol building, vandalizing offices and looting, they were removed with remarkably few arrests by local and federal police forces. Around 8 p.m. senators returned to the senate floor to finish the certification of the election. Vice President Mike Pence reconvened on the floor saying, “Today was a dark day.”

Soon to be minority leader Republican Senator Mitch McConnell spoke after him, calling those who stormed the building “unhinged.” “They tried to disrupt our democracy and they failed.”

Democratic leader Chuck Schumer was more pointed, saying Trump “bears a great deal of the blame” for the days events. “This mob was in good part President Trump’s doing, inciting by his words, his lies.”

“We can now add January 6 2021 to the very short dates in American history that will forever live in infamy,” he added.